Berlioz
Les Troyens – Opera in five acts to a libretto by the composer based on Books I, II and IV of the Aeneid by Virgil [Sung in French with English surtitles] 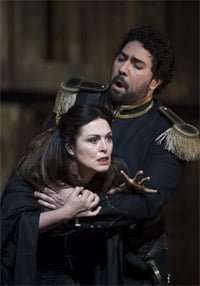 But for Paris, Prince of Troy, carrying off Helen, wife of Menelaus, King of Sparta, the Trojan War would not have happened. For the first time since 1972, The Royal Opera is presenting Hector Berlioz’s magnum opus Les Troyens (The Trojans) absolutely complete. David McVicar’s direction may at times not differentiate characters sufficiently, but there is plenty of action, and the love interests, not least between Dido and Aeneas, are sensitively staged. The sets are often striking, not least the majestic city walls of Carthage (from Act Three onwards, when the Trojans arrive there), which is also seen in miniature form. In Acts One and Two, costumes are ‘old’ enough to be convincing to this ancient happening and Carthage finds lavishness coming to the fore, the trappings of a prosperous society.

But wait until you see the Horse – beware Greeks bearing gifts – a spectacular coup de théâtre, a beast made of all manner of paraphernalia that is beautifully shaped into equine-like features. It towers above the stage and those that populate it. It lives and breathes fire.

This epic opera opens with the Greeks having seemingly fled Troy leaving a scrap-yard of shields and weapons. The Trojans are jubilant (lusty singing from the Chorus), save for soothsayer Cassandra who is predicting the worst. Even her lover Coroebus isn’t convinced by her doom-laden prophecies. Anna Caterina Antonacci gives an electrifying portrayal of this demented if accurate forecaster. She spares herself and us nothing and makes the stage her own. Once the horse has been accepted the Greeks sack Troy (blood and flames) and those that survive flee by sea, led by Aeneas, to find the safe haven of Carthage ruled by Queen Dido, loved by her people, as Act Three’s uplifting hymn of praise movingly demonstrates. She however is widowed and resisting any overture of love – until Aeneas arrives. 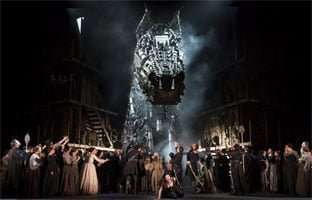 This third performance of six, to be followed by one at the BBC Proms, found all involved on top form. In addition to Antonacci, Fabio Capitanucci was a dashing and caring Coroebus, Bryan Hymel an heroically voiced Aeneas, tender too when wooing with Dido (whatever Jonas Kaufmann would have done with this role, Hymel’s heldentenor is fully up to the job), and Eva-Maria Westbroek is a human and devoted Dido until she is a woman scorned by Aeneas’s dutiful departure (to find Italy and found a new Troy). Until then their falling in love, and their duet, is wonderfully wafting and fragrant, thanks to Berlioz’s rapt, exquisite music, translucently realised here. Hymel brings out Aeneas’s departing aria, his schism with Dido complete, with due determination, and Dido’s lamenting and thirst for revenge knows no bounds. It was good to see Robert Lloyd as Priam, and Brindley Sherratt brought much gravitas to Narbal, Dido’s minister. Hanna Hipp is a loyal Anna, Dido’s sister. 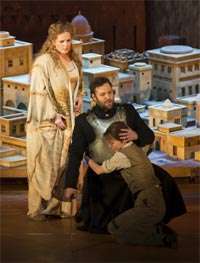 In the pit much is magnificent. Sir Antonio Pappano has the measure of this huge score, giving it with exhilaration and breathing space. One might wish for greater unleashing of the elements in ‘Royal Hunt and Storm’ (one of the great examples of musical nature-painting) and suggest that the ballet is not needed (this music creates its own pictures), although the terpsichorean arts are well deployed in the divertissements elsewhere. The playing is magnificent. Haunting the memory in particular is some astonishing so-sensitive and so-expressive clarinet playing. Backstage and distant brass groups are judged to a nicety in terms of perspective. Whether ceremonial, solemn or intimate, Pappano and his players have nailed this (4½-hour) score, Berlioz’s squiggles, decorations and trombone rasps made his own. Pathos, lyrical beauty and emotional urgency are in full supply.