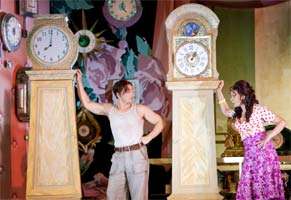 This is the first revival of Richard Jones’s 2007 double-bill of two one-act operas, here revived by Elaine Kidd. Ostensibly both comedies, they could be played straight as drama because tragedy is only the reverse side of comedy. On first sight the plots for both “L’Heure espagnole” and “Gianni Schicchi” have a serious side. Both pieces are about deception, the first concerning characters who are very much alive, while the second is dealing in death.

The Ravel sees Concepcion, wife of clockmaker Torquemada, entertaining her poet lover Gonzalve while her husband is out checking that the town’s public clocks are in working order. Once a week the timing is just right for Concepcion and her deception, which usually goes unnoticed. However, this time she has a visitor, Ramiro the muleteer, who is left in Torquemada’s shop while he is away. Concepcion has to be devious and find a way of removing Ramiro so that she can enjoy the favours of Gonzalve. But then there’s also the problem of the randy banker Don Inigo Gomez who also arrives looking for lust with Concepcion. 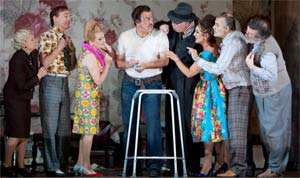 In “Gianni Schicchi” the deception is perpetrated by the family of Buoso Donati who, when he dies, believe that he has willed all his possessions to the Church. How can they stop this and keep the inheritance for themselves? If the Will has not been published they can write a new one. When family member Rinuccio finds the document, he offers it on condition that he is permitted to marry Lauretta, daughter of peasant handyman Gianni Schicchi. They send for Schicchi and he hatches a plan to impersonate Buoso, pretending he has not died. He dictates a new Will but also has another deception in mind that will come to the aid of his daughter’s impending wedding.

All serious stuff but, given an extra dimension of comedy, the pieces come to life in a totally different way. Ravel wanted to write his first opera as a comedy because he reckoned that France had no comic-opera tradition, despite Offenbach whose music Ravel did not find innately humorous. For Puccini “Gianni Schicchi” was his only comic opera, he being firmly wedded to the dramatic, not to say melodramatic, narratives of “Madama Butterfly”, “La bohème”, “Manon Lescaut”, “Tosca” and “Turandot”.

In the event both work brilliantly as comic operas and, given the right, light touch, work perfectly well. It is unusual to find these two particular operas hitched together, but Richard Jones’s staging succeeds for both pieces. Antonio Pappano takes the orchestra gently by the hand and the musicians play some superbly rapturous music. 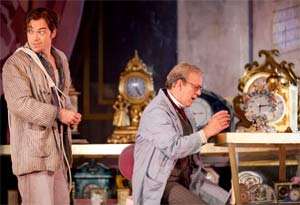 Set against John Macfarlane’s deliciously decorative clock-shop designs (in contrast to his designs for “Gianni Schicchi”, a dark, dismal bedroom with the smell of death in the air) “L’Heure espagnole” presents a sunny view of life in Toledo during the ‘Spanish hour’, that time of day when the master is away and the mistress will play. It is almost the same cast as the original line-up in 2007, apart from Christine Rice who had to drop out. Ruxandra Donose makes a fine replacement as the skittish Concepcion who cannot wait for her poet lover to arrive. The cuckolded husband Torquemada (anybody less like his 15th-century namesake, the head of the Spanish Inquisition, would be hard to find) leaves Ramiro, the muleteer customer, with his wife while he is checking the clocks of Toledo. To get Ramiro out of the way Concepcion asks him to cart a grandfather clock up to her bedroom. Glad to be of use, Ramiro carries out the task but returns as Gonzalve arrives. Frustrated, Concepcion gets Ramiro to carry another clock upstairs and, as he is repeatedly asked to do this, he takes off his coat and then his shirt and, by the time he is down to his t-shirt, Concepcion realises what she is missing in the hunky muleteer and takes him upstairs instead.

It’s all nicely worked out with delightful performances by all concerned. Bottone as the unsuspecting husband, Donose as the wayward wife, Yann Beuron as the poet (a Jarvis Cocker lookalike), and Andrew Shore as the ghastly old banker. Christopher Maltman’s Ramiro starts as a shy and rather grubby simpleton on whom you can almost smell his donkeys, but he is soon literally flexing his muscles carrying the clocks and then as an all-too-willing would-be lover. 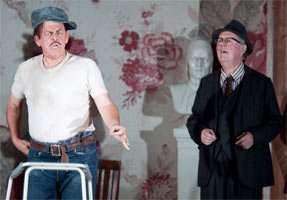 If “Gianni Schicchi” is darker, it is no less funny, as the appalling Donati family wheedle and connive their way into getting their hands on old Buoso’s house, his mule and the mills. They may not be too worried about how they acquire their legacy but, when they involve Schicchi in their illicit efforts and write a new will, Gianni has a good cause in mind. Thomas Allen makes a suitably loud Schicchi, a real peasant with nothing subtle about him, except of course his singing. Stephen Costello as Rinuccio, the nephew who finds the old Will, sings his heart out while Maria Bengtsson as Lauretta, his intended and Schicchi’s daughter, gives a lovely account of the opera’s only hit, ‘O mio, babbino caro’. Good support also comes from Elena Zilko as Zita, Robert Poulton as Marco, Marie McLaughlin as his wife La Ciesca, and Janis Kelly as Nella.

Richard Jones manages the staging very well and gives it so much pace that it at times verges on the frantic. There are hilarious moments when everybody is scouring the house from top to bottom looking for the lost Will and Testament. There is some terrific and really funny business going on here and it’s not often you can say that about comic opera. This performance marked the 40th-year of Gwynne Howell’s association with the Royal Opera. In “Gianni Schicchi” he sings Simone, cousin of Buoso and the oldest man in town and former Mayor, giving to a relatively small role all the attention and dedication he has shown in his varied work over the past four decades as a mainstay of the company.