The Orchestra of the Royal Opera House
Semyon Bychkov 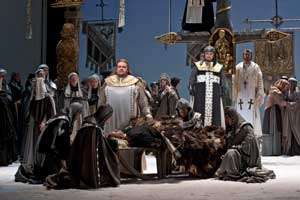 There is much to enjoy in this revival of Elijah Moshinsky’s 1977 production of Wagner’s most romantic opera, not least the opportunity to hear the extended version of Lohengrin’s Gralerzählung (“In fernem Land”) in the final act with the associated extra choral contribution that surrounds it in a staged performance, rather than on recordings. The second part of that ‘aria’ is usually cut as not only does it place huge demands on the tenor at the end of an already long evening, but also because it is thought to hold up the action and lessen the impact of the Swan-Knight’s revelation of his true identity.

Rather than take this as received wisdom we can now judge for ourselves. The additional material elucidates why Lohengrin has appeared in Brabant and also enhances the links with the “Parsifal” story. The thematically rich and attractive music of the second part of the aria allows the singer to shift the mood from mystical back to heroic, ensuring the final farewell is better contextualised. Given that the characters here are largely static for the first part of the narration, the extra minutes do not really lessen the dramatic impact, though Lohengrin’s rather public lecturing of Elsa about her lack of resolve runs the risk of being overdone for contemporary sensibilities.

Semyon Bychkov coaxes an orchestral performance of luminosity and pace, particularly in the passages linking the various scenes. The upper strings lent a mystique to the harmonies of the Prelude to Act One in which the richly positive ascendant themes are gradually modulated to more wistful passages at the conclusion. The off-stage brass effects were well-handled, and much of the lower woodwind playing was stupendous. Bychkov also paced the passage leading up to Lohengrin’s arrival really well – the house was absolutely silent before the tenor’s first utterance.

The highly complex choral-writing was sung both vitally and, where needed, lustily, by the augmented chorus. In the principal roles there was much to enjoy, too. 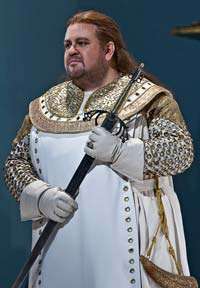 Successful performances of “Lohengrin” largely stand or fall on the vocal abilities of the tenor. Johan Botha’s voice encompasses both the lyric and heroic aspects of the part, excelling more in the latter. He has the vocal heft and ring for the more dramatic outbursts and the technique and dynamic control to realise effectively the fluid and romantic passages, but ethereal qualities were lacking in such moments as “Mein lieber Schwann” and the start of “In fernem Land”.

This production does not help Lohengrin’s first appearance by placing him with his back to the audience and conductor and separating him from the rest of the cast who remain behind a gauze. It must be a nightmare to have to sing that passage in that way. Surely the audience should see Lohengrin’s face at that point. 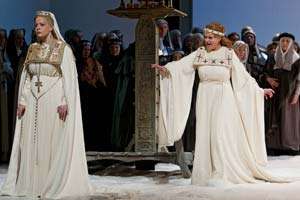 As Elsa the Italian soprano Edith Haller was making her house debut. She looks right for the part but her performance was pallid and prosaic. Elsa can seem passive and wishy-washy unless her feistiness is brought out (one thinks immediately of Mattila and Studer in past revivals of this production). Haller’s voice did not always have the fluidity and creaminess of tone that can really elevate “Einsam in trüben Tagen” and “Euch Luften”, and a flutter occasionally marred her tone and pitch.

Petra Lang was vocally formidable and fearsome as Ortrud. She overplayed the baleful stares and came dangerously close to ‘ham’ when glancing knowingly at the audience as she insinuated her way back into Elsa’s confidence in Act Two. It was a tad predictable dramatically and as a result menace was lacking. Nevertheless, the long-held notes at the end of “Entweihte Götter” were thrilling.

Gerd Grochowski was Telramund and was deputising for Falk Struckmann. His was a strong and subtle portrayal – very much the hapless yet honourable noble being manipulated by his wife – and he sang the part in an attractive and virile baritone, though a darker quality to the voice was needed in the declamatory moments.

Boaz Daniel was a fine Herald with definite presence, whilst Kwangchul Youn’s respectable King Heinrich seemed to have misjudged the Royal Opera House’s acoustic as his soft-grained bass lacked the low-note resonance and power of the best interpreters. He is probably better suited to roles like Gurnemanz in “Parsifal”, which he sings in the current Bayreuth production.

Moshinsky’s production is not without its problems, and parts of it look rather dated, though the totemic Christian and pagan symbols remain arresting. Technical trickery could lend more atmosphere even to a traditional staging such as this. No problems with the musical side though – especially from an orchestral perspective.