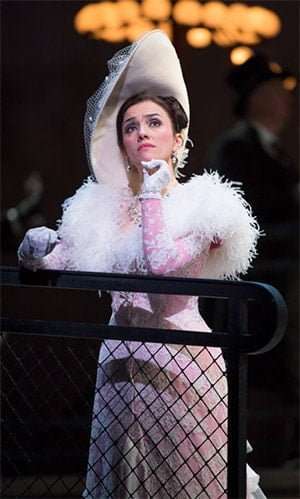 Do not be tricked by the genre-title of Jules Massenet’s Manon, opéra comique (Bizet’s tragedy Carmen is titled similarly), but allow yourself to be seduced by its Romantic sweeping music, human frailties and vice, and a goodly dose of retribution, redemption and love, and inevitable heartbreak. This is not ‘comic opera’, and that is where Laurent Pelly and this revival’s director Christian Räth miscalculate, by playing too much for laughs. Pelly’s trademark pauses or subtle motions – the cast stationary or moving as if pulled by a puppet-master – work well in light fare such as La Fille du regiment (also for The Royal Opera), but undercutting the action here dissipates any tension that is built up.

When the-now Abbé des Grieux can no longer resist Manon’s base entreaties in Act Three, she rips apart his cassock revealing his chest: unnecessary and (unintentionally?) comical. Similarly, it is impossible to believe how evil and bitter the old-man Guillot de Morfontaine really is when we see him turn-in Manon and Des Grieux to the authorities at the end of the ‘Gambling Scene’ (Act Four) because his earlier promise of vengeance went for little – despite the music’s thunderous evocation – and his character has been treated as a bumbling fool. The abduction of Des Grieux at the end of Act Two is lame. Some of Chantel Thomas’s sets are too toy-town, but the claustrophobic gambling den of Paris’s Hôtel de Transylvanie is seediness personified.

It was in the ‘music department’ that the goods for this First Night were delivered. Emmanuel Villaume inveigled from the ROH Orchestra fine playing indeed: the strings delivered playing of great finesse and silkiness, and the rendition was lively where necessary. The ‘Prelude’ captured martial jollity as well as the longing and tragedy that arrive later. Villaume’s sensitive conducting supported the singers superbly, their characters, swayed easily by frivolous and earthly pleasures, need such backing, and Massenet’s music is tailor-made.

Ermonela Jaho was a terrific Manon. She fulfilled the role’s demands with aplomb, delivering exquisite lightness or heartfelt drama. She made believable Manon’s change from the innocent country girl who is off to a convent, through the young woman as a courtesan and being men’s centre-of-attention, and onto a woman who recognised death as a release. She sang ‘Adieu, notre petit table’ with a beautiful realisation that her life is not what she wants , which contrasted appositely with her confident delivery of ‘Je marche sur tous les chemins!’ that cast a spell and convinced that hedonism is the ‘way’. Her triumph was in the big-voiced moments, and the beauty she mustered as she persuaded Des Grieux to leave with her was tinged with the remembrance of better times, while the living-for-the-moment ‘Ce bruit de l’or’ evoked what today is referred to as YOLO. 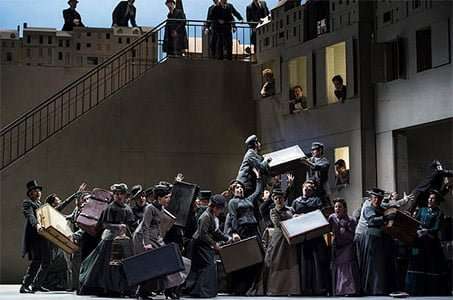 As Des Grieux, Matthew Polenzani made an ideal interpreter: he was idealistic – the man who falls for Manon’s charms, risking his own sanity, as well as the judgement of God and his own father. But the overriding emotion was regret, with ‘Ah! fuyez, douce image’ laced with fond memory of Manon. Through his colourful tenor, Polenzani’s contributions compelled. When in duet with Jaho, the sparks flew.

In the surrounding population there was much to relish. Christophe Mortagne’s Guillot stole the scenes he was in with a mix of sophisticated charm or ruthless anger. William Shimell dispatched De Brétigny (a friend of Guillot who also loves Manon, and who persuades her to live with him as he has wealth) with the ruthlessness with which he then discards Manon, and so made this small part a crucial fulcrum for the story, and his voice was edged with a delicious degree of legerdemain. Lescaut had Audin Iversen delivering a slimy and unlikable cousin to Manon, his voice laced with ambivalence, uncaring of her plight, and similar to Alastair Miles’s Comte des Grieux. Enjoyment was to be had from the three courtesans, who played off one another and the crowds, with glee.

The often-cut ballet scene provided the only real longueur, and its staging is cramped. Dubious directorial decisions aside, the Chorus in full voice along with a polished orchestra, and singing of idiomatic brilliance, makes Manon a musical treat. Puccini’s operatic treatment of the same story (Manon Lescaut) opens in June in a new production, directed by Jonathan Kent.