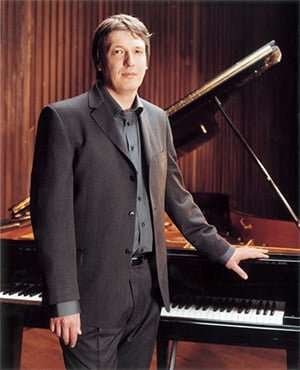 Boris Berezovsky cultivates a maverick profile – the gambling, driving round London in his own black cab, setting himself the near-insane challenge of programming Godowsky’s transcriptions of Chopin Etudes – and I well remember a scorching performance of Tchaikovsky’s First Piano Concerto that went so well he and the conductor Yuri Temirkanov played the second half of the finale as an encore, even faster and flashier. Reprehensible perhaps, but dazzling all the same.

Berezovsky’ s irrepressible spontaneity fed into this London recital, played to a respectably full but hardly capacity audience (their loss), with a change to the published programme and the addition of two Debussy Images announced from the platform.

As was the case with his great compatriot Rostropovich, Berezovsky gives the impression of living in a cyclone of activity that suddenly defines its focus when he sits down to play. He has that uncanny knack of conjuring the spirit of the music. The dovetailing of opacity and translucency in ‘Reflets dans l’eau’ was palpable, and he gave the piece a presence that took it way beyond its title. The same sort of ferocious insight flickered through his selection of Debussy’s Préludes – a ’Danseuses de Delphes’ that hovered tantalisingly between antique rhythms and impressionist blues, a multi-layered ‘Le vent dans la plaine’ of an astonishing evenness that played games with the wind’s wild unpredictability, a ‘Des pas sur la neige’ that seemed to evoke soundlessness through sound itself and had only the barest purchase on the snowy landscape. There was a lambent simplicity to ‘La fille aux cheveux de lin’ that hinted at less direct complexity.

Berezovsky’s connection with the music was phenomenal in Ravel’s Gaspard de la nuit, in a performance bristling with risk-taking wizardry – his rapid repeated notes were hair-raising – and, again, there was that signature identification with the spirit behind its darkly hyperbolic fantasy, which achieved transcendent lift-off in a superbly grand and grotesque ‘Scarbo’.

For all its virtuosity and sheer stamina, Berezovsky’s style is very laid-back and pragmatic, rather reminiscent of Jorge Bolet. Very occasionally a theatrical flourish made its mark, but otherwise nothing got in the way of his supernatural control of weight, touch, colour and clarity, brilliantly realised in the Rachmaninov. Berezovsky’s playing of the Preludes was saturated with that special fragrance of grandeur, reticence and melancholy. Prelude No.4 became an epic tone-poem, with an unscripted but passionate narrative, straining to be free of rhythmic incisiveness in an unparalleled display of dynamic tension, and the way in which the burrowing phrases of No.9 strived towards a half-lit lyricism that was thrillingly ‘right’. The same imaginative overview extended into a mighty performance of the Second Sonata, in which Berezovsky was at the centre of the work’s highly romantic temperament. At times the sound was massive, but it never sounded hard or occluded, and the generosity of his overview of the work kept its architectural expansiveness and mercurial excitement on a rolling boil.

As a gentle wind-down, his first encore was Tchaikovsky’s ‘October: Song of Autumn’ from The Seasons, followed by an impossibly nimble whiz through Liszt’s Gnomenreigen. But beyond all the technical accomplishment, you came away with memories of Berezovsky’s keen awareness of musical possibilities and the subtlety of his imagination. He’s a great pianist.