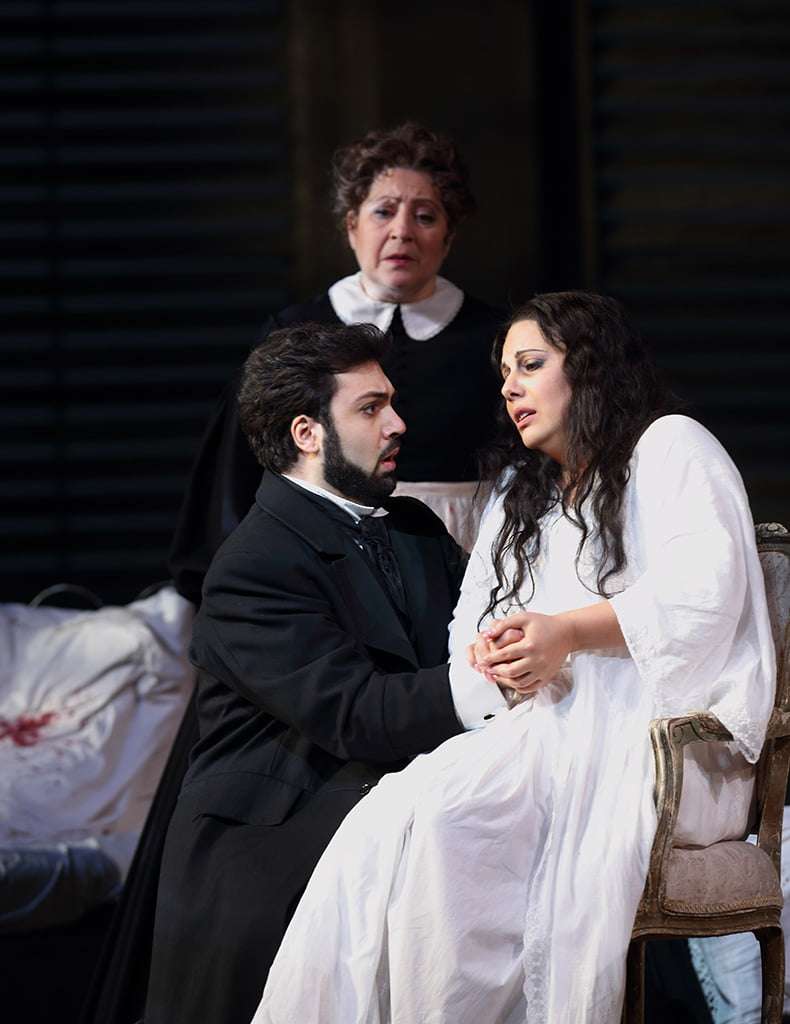 Can it really be 25 years since this production first graced the stage of the Royal Opera House? With revivals at least every other season the staging has become something of a fixture, and it still comes up fresh. Great productions stand the test of time when they allow some memorable interpretations to bloom and re-energise the staging, bringing new slants and insights within the still impressive storable stage framework. This latest set of revival performances has several casts and conductors, but notably each cast has been assigned a different revival director, and so each grouping of principals will surely bring dramatic variants as well as vocal ones. That’s a sign of a seriousness of approach to bringing quality at the Royal Opera House.

This opening night got off to a slightly underwhelming start, but, by the end of the performance, the drama had certainly come alive and engaged the audience as the ovations confirmed. Assuming the mantle of Violetta is Armenian soprano Hrachuhi Bassenz. Hers is a big, rich yet agile voice allied to a strong presence. Evidently succumbing to the early ravages of tuberculosis before her party began, this Violetta visibly rallies herself as her guests start to arrive. She’s already putting on a brave front. Initially Bassenz’s words are somewhat indistinct and her tone a little cloudy, but by the time the ‘Brindisi’ has been dispatched she hits impressive form, singing the concluding section of ‘Ah, fors’è lui’whilst lying on her back on a couch before rising for a technically assured and exciting “Sempre libera” – all the coloratura decorations neatly articulated. In Act Two she is a strong emotional force, resolute and not overly vulnerable in the presence of Simon Keenlyside’s prudish, manipulative Giorgio Germont. Her articulation of “Così alla misera ch’è un dì caduta, di più risorgere speranza è muta!” is as heart-stopping as it should be. In the final Act she surprises by really suppressing the natural richness of the tone to dramatic effect, and with scrupulous care over dynamic, aiding credence to her portrayal.

That she was partnered by a fellow Armenian as Alfredo, Liparit Avetisyan was perhaps a bonus. His is a lovely softly lyrical voice, not without steel when needed, and he has a great sense of phrase. His Alfredo is pleasantly gauche in the first act, and yet the emotional immaturity, quick temper and headstrong qualities of the character emerge strongly in the second act, especially when in resentful confrontation with his father. “De’ miei bollenti spiriti” is full of ardour; “Parigi, o cara” meltingly persuasive.

Simon Keenlyside was, as ever, an intelligently vocalised and enunciated Germont père, even if the tone is now not as sappy as it once was. There are some strong cameos, notably Sarah Pring’s attitude-full yet concerned Annina, Germán E. Alcántara’s bullish Baron Douphol and Stephanie Wake-Edwards’s feisty Flora, and the ROH Chorus lent vocal power and individuality of character to their parts. In the pit Daniel Oren isn’t perhaps the most revelatory of conductors. He’s inclined to linger over some passages, admittedly capitalising on the qualities of some of his principals, but sometimes diminishing the dramatic tautness. That said, his accompaniment to Violetta’s final utterances on earth are perfectly judged and balanced. With Otello running in the repertoire concurrently there is some impressive Verdian singing at the Garden at present.