Not Hostel IV but Salome III. For this second revival of David McVicar’s hell-hole staging, a grisly affair set by designer Es Devlin in the dripping tiled cellar of a torture-porn movie, Andris Nelsons stabs and slices his way through Richard Strauss’s rich, dark score.

With barely a moment of repose during the opera’s 100-minute duration, the Latvian conductor shaped his reading with a decisive confidence and allowed the massive orchestra to coalesce into a single organism that swirled, screamed, writhed and roared. One moment it coloured the wind that blows hot and cold in Herod’s imagination, the next it shone fierce sunlight into the eyes of Jokanaan (John the Baptist) as he emerged from incarceration; but above all it depicted the uncontrolled surge of the hormones that drive Richard Strauss’s Salome towards distraction and self-destruction.

Barely twenty-four hours after conducting the 50th-anniversary memorial performance of Britten’s War Requiem in Coventry Cathedral, Nelsons brought the same commitment to communicating a very different kind of depravity. He propelled his forces with a momentum that reflected the eponymous young woman’s blind folly. Poor Salome: there is no room for second thoughts in a mind that’s racing towards insanity. The musicians of the Orchestra of the Royal Opera House revelled not just in the 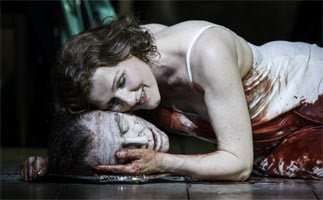 orchestration but in the energy with which they were asked to put it across. In this perfect storm the occasional splashed note slipped through the gate, inevitably, but within the context of such magnificent, crunching interpretation such tiny lapses barely registered.

There was a sense that something nasty could erupt at any moment, as it eventually did when Salome’s request to “Gib mir den Kopf des Jochanaan” (Give me the head of Jokanaan) became first a demand, then a command. David McVicar’s modern-dress production, ably revived by Bárbara Lluch, recognises the sinister potential of stillness: he peoples the stage throughout with motionless characters whose mien variously evokes torpor, trance, shock, disbelief, self-preservation and feigned indifference. A pale, pink prostitute shares the space with an identically-coloured side of beef, their congruent roles in the upstairs entertainment all too apparent. Jews and generals coexist uneasily here, brought together (it is implied) through a shared fascination with life’s dark side. But even they retain the capacity to be appalled by the depths to which one teenage girl can sink.

Herod is to blame, of course, and his appeal to Salome to “Tanz für mich” (dance for me) unleashes a lot of trouble.MacVicar’s wholly original take on ‘Dance of the Seven Veils’ begins with a scenic coup de théàtre and travels through seven rooms that represent different stages in the old man’s seduction of his new wife’s daughter. In the director’s concept something seems to click in Salome’s brain the moment her modesty is destroyed, and from that point on Jokanaan’s fate is sealed. 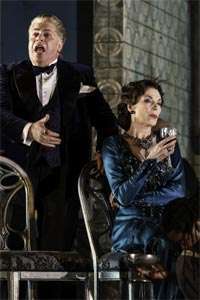 The German dramatic soprano Angela Denoke returns in this revival, having played the title role to acclaim both in this production (in 2010) and elsewhere, and physically she dominated the stage – a restless, prowling presence with the suppleness of a cat and the wilfulness of a petulant girl. Vocally, though, all was far from well. She sang slightly under the note most of the time, with a shrill edge to the voice that prevented her from blending with the rich orchestration. Salome is a massive role for any singer – as Strauss acknowledged when he declared she should be “a sixteen-year-old with the voice of Isolde” – but on the latter count at least the ever-youthful Denoke fell short.

The performance of the evening came from Rosalind Plowright as Herodias, Salome’s mother-from-hell. Not only did the ageless mezzo (and former soprano) find surprising depths in her portrayal of this jealous harridan, she also sang and enunciated superbly. Almost as good were Egils Silinš (last year’s Flying Dutchman at this address) as Jokanaan, heroic and clear-toned, and Stig Andersen as a well-characterised Herod. Will Hartmann made a great impression as Narraboth, the soldier who loves Salome from afar, although his Pythonesque upstage suicide brings with it the production’s one moment of botched direction. No such miscalculation affects the opera’s conclusion, as the blood which pours from Jokanaan’s severed head runs in rivulets down Salome’s simple white shift to illustrate – in the most shocking manner imaginable – the end of innocence.