Rossini
Semiramide – Tragic melodrama in two Acts to a libretto by Gaetano Rossi based on Voltaire’s Sémiramis [sung in Italian, with English surtitles] 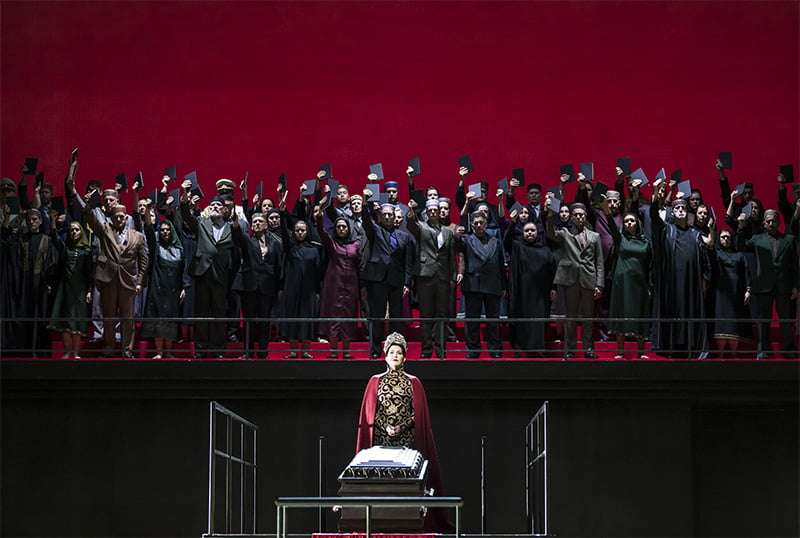 Semiramide was the last opera Rossini wrote for Italy before moving to France and it marked a high-water mark of the florid Italian style. David Alden’s Covent Garden production, first seen in Munich earlier this year, is London’s first since 1887 – Rossini’s fortunes waned in the first half of the last century – although there have been luxuriously cast concert performances from The Royal Opera in 1986 and last year at the Proms on the back of the Opera Rara recording.

Depending on your view, Rossini either broke the mould of opera seria in Semiramide or expanded it to get ever nearer to the ideal of through-composed opera – hence the elaborately formed ensembles, emotionally hard-hitting duets and solos, and this work’s other chief glory, the orchestra-accompanied recitative which corrals the set-pieces into its dramatic flow. Moreover, as Antonio Pappano’s inspirational conducting makes abundantly clear, you can hear the style moving confidently from high Baroque, to Classical and on to the sort of Romantic Italian lyricism you get in early Wagner. 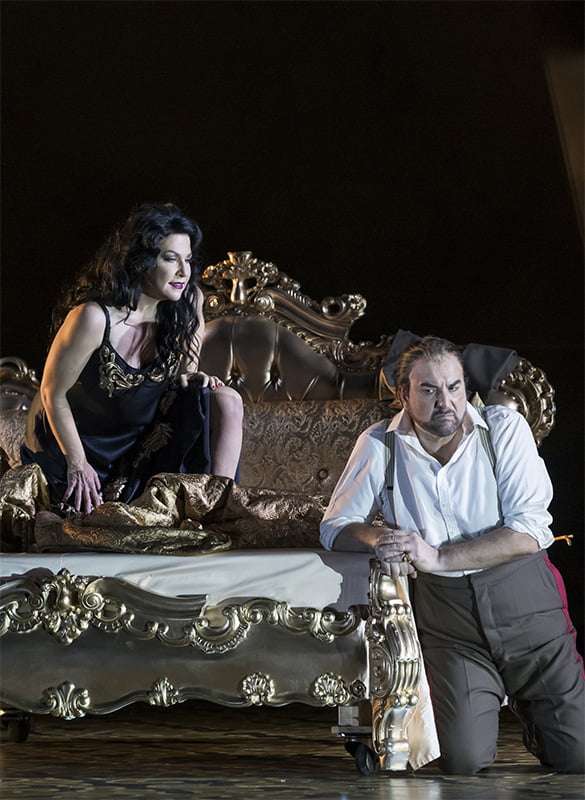 The plot – Semiramide, the Queen of Babylon who with her henchman (and in this production her lover) Assur organised the murder of her husband to grab the throne and years later is unaware that Arsace, the splendid young soldier she loves and wants to marry, is her son Ninia, who vanished when her husband was killed – is by opera standards simplicity itself, with a subplot about princess Azema pursued by Arsace, with Assur and the Indian king Idreno undeveloped and there only to add grit to the central incestuous possibilities, and leaving plenty of scope for Oedipal and Lady Macbeth parallels.

Musically, this performance made me go weak at the knees. From the Overture onwards – with a quartet of horns and woodwind-playing to die for – the quality and responsiveness of the response is superlative. Pappano has the Rossini idiom down to his fingertips and such was his command of weight, pace and detail that this long stage-work – Act One is the best part of two hours, Act Two just over ninety minutes – effortlessly sustained interest and momentum.

Semiramide is officially a soprano role – it was one of Joan Sutherland’s triumphs – and the mezzo Joyce DiDonato doesn’t fling out stratospheric top notes with abandon, but the quality and artistry of her intonation, coloratura and trills are astounding – her brief injections of fuller tone in her lower-voice phrasing are so expressive they hurt – and she gets deep into the psyche of the wicked queen and her murky passion. Daniela Barcellona, a specialist in Rossini trouser-roles, made a swaggering Arbace, her softer mezzo giving her marvellous coloratura a lovely veiled quality, and she and DiDonato knocked spots off each other in their ambiguously romantic duet in Act One.

The role of Semiramide’s duplicitous henchman Assur was originally to have been sung by Ildebrando D’Arcangelo, who was replaced by Michele Pertusi until he, also ill, withdrew at the end of Act One and was replaced in turn for Act Two by Mirco Palazzi (who is scheduled to sing the complete role on December 16). Palazzi thus got the cream of the role, a steamy bit of yet more plotting with Semiramide and later a gripping ‘mad’ scene, distinguishing himself in both. Bálint Szabó’s sepulchral high priest Oroe had resonance and authority, the tenor Lawrence Brownlee was on top bel canto form as Idreno, delivering his music with consummate style, and Jacquelyn Stucker’s Azema was assured and inappropriately handled by her various suitors. 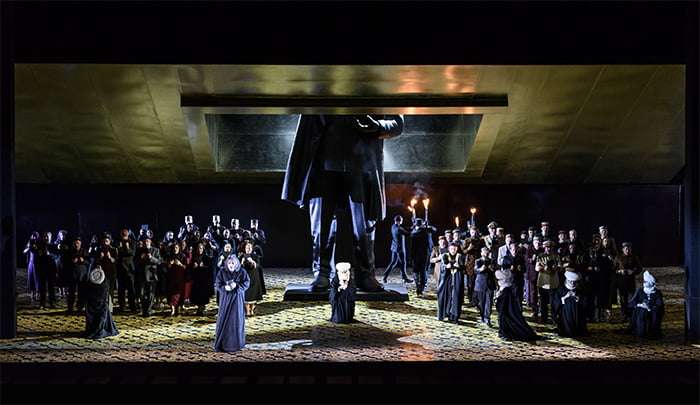 As with much of his work, I found that David Alden’s production keeps the audience at arms’ length through sending up the absurdity of totalitarianism. Set designer Paul Steinberg has come up with all the trappings of dictators from North Korea, China and the Middle East, with a strong reference to the Trump set-up. Steinberg has nailed appalling potentate taste with a giant statue of a beloved leader (here the murdered king) and a colossal and colossally ugly chandelier. In her time-travelling costumes, Buki Shiff (another Alden regular) makes Joyce DiDonato look sensational, presents Idreno and his retinue in splendid long, sexy white jackets and bejewelled turbans, and dresses Princess Azema in a gold sheath-cum-straitjacket succinctly indicating her status as a commodity. The chorus of Koran-waving holy men in ayatollah-type headgear establishes the sooth-saying, religious cult supremacy that rules Semiramide’s roost – and makes a tour of this production in the opera houses of the Middle East unlikely. Looking a lot like Rasputin, Oroe is a wild-eyed hermit of unassailable authority.

Yet, whatever your take on the gist and references of Alden’s direction and his team’s designs, he and Pappano leave you in no doubt that this is grand opera at its grandest.