The Orchestra of the Royal Opera House
Sir Andrew Davis 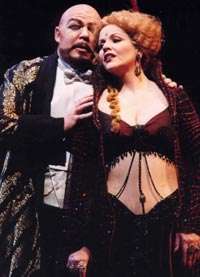 The Royal Opera has allowed two concert performances of “Thaïs”, of which I attended the first, and that is that, though the second one, on 29 June, is to be recorded for broadcast on BBC Radio 3. From the originally announced cast, Thomas Hampson withdrew, enabling the young baritone Simone Alberghini, recently Dandini in Glyndebourne’s “La Cenerentola”, to make his Covent Garden début.

“Thaïs” is very much a long duologue for the courtesan and the monk, punctuated by other characters, like the hedonistic Nicias and the old Cenobite monk Palémon. The work has a fine soprano aria at the beginning of Act Two, and the earlier ‘Violà done la terrible cité’, the aria in which Athanaël describes Alexandria, the foul-aired city of his birth, has received a number of recordings over the years. Act Three contains the lovely duet ‘Baigne d’eau’. Nevertheless, the most well-known excerpt is probably the ‘Méditation’, an orchestral interlude with violin solo, played sweetly by Peter Manning, one of the Leaders of the ROH orchestra.

Sir Andrew Davis drew out the lushness of the score, its eroticism, its variety of emotions as the relationship between Thaïs and Athanaël changes, and the orchestra produced some succulent playing.

The performance benefited greatly from the presence of Renée Fleming, who has recorded the title-role. She was in fine voice, not only spinning luscious tone in the middle of her range but producing some beautifully placed mezza voce notes on high and yet emitting some strongly dark and dramatic accents in the lower reaches. She conveyed the various aspects of Thaïs’s changing life, from her self-admiring scene with her mirror in ‘Dis-moi que je suis belle’, the aria referred to in my second paragraph, in which her voice was free and shining, to her approaching death, with the tone less gleaming. 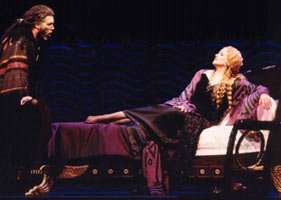 Alberghini gave a better performance histrionically than vocally. He caught Athanaël’s denunciation of worldly behaviour and was even more successful as the monk realises his passion for Thaïs. His voice, though, was hollow, without a true tonal centre, and did not ring out as steadily as it should. Indeed, he produced a vibrato that was too wide. Also with a noticeable vibrato, but a quicker, tighter one, which I happen to find attractive, was Joseph Calleja as the pleasure-seeking Nicias. The character has no aria, but enough exists in duets with Thaïs and Athanaël respectively for Calleja’s clean-toned, easily produced sounds to project the lasciviousness of the wealthy young man,

Why did the Royal Opera not grant “Thaïs” a full production rather than yet another for “Pelléas et Mélisande”, which did badly at the box-office?