The Orchestra of the Royal Opera House
Thomas Adès 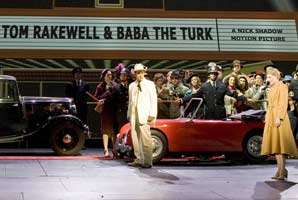 Surprising that as one of the relatively few undoubted operatic masterpieces from the post-war era, Stravinsky’s “The Rake’s Progress” has only once before been staged by The Royal Opera. Elijah Moshinsky’s 1979 production was last seen here around a quarter of a century ago; and understandably there was anticipation concerning Robert Lepage’s current production which, having debuted in Brussels and subsequently been seen in Lyon and San Francisco, promised to be very much a ‘Rake for our time’. Its premise was that of presenting the opera in a context of the early 1950s American culture out of which it emerged.

As realised by Lepage’s production company “Ex Machina”, the staging is for the most part convincing – with intriguing parallels being thrown up between eras two centuries apart as well as by those who peopled them. Admittedly the fact that much of the opera is set in London involves a shifting of the conceptual goal-posts, but the evocations seldom seem inappropriate while Lepage’s use of video imagery as integral to his concept has unobtrusive virtuosity – lending a distance and also unreality, and underscoring the non-realism of words and music. Moreover, what conceptualising there is itself becomes less evident as the work unfolds: a parallel, perhaps, to the freedom Stravinsky increasingly instils into the continuity between scenes. 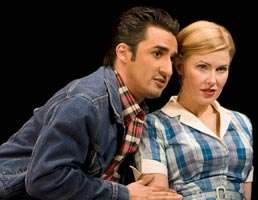 To bring so many ancillary elements into play and yet preserve the opera’s essential Classicism is no mean feat. Certainly anyone who has been dissuaded from seeing this production on the basis of the Opus Arte DVD of the La Monnaie staging can be assured that any lack of visual clarity and approximation of perspective are not encountered here. And, for the most part, the cast assembled in London is superior to that in Brussels. Above all, Sally Matthews is an Anne to die for – conveying empathy and compassion with no leavening of human emotion, while always respecting the essential grace of her role. As Tom, Charles Castronovo is only marginally less successful – just a touch of strain at seminal moments detracting from what ought to prove (as the run continues) a studious but unaffected rendering of a figure who by rights should command little sympathy. 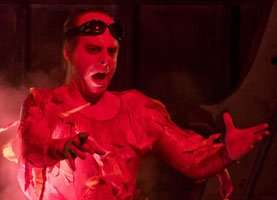 John Relyea is an imposing, indomitable Nick – making up for what he lacks in suavity with a darkness of tone and forcefulness of projection, not least during the climactic graveyard scene. Darren Jeffrey is a thoughtful if anonymous Trulove, and Kathleen Wilkinson a rather insipid Mother Goose, but Patricia Bardon is at-one with the character of Baba the Turk in suggesting the creative flair and human vitality possessed by one marked out as a human ‘freak show’. Peter Bronder evinces the right degree of camp as Sellem, and Jonathan Coad is sympathetic as the madhouse keeper. The Royal Opera Chorus dispatches its several and varied functions with zeal.

Thomas Adès paces the opera securely and with no lack of finesse in terms of phrasing and instrumental detail. Lacking as yet is that cumulative urge that propels the action forward in order for might what seem a judicious assemblage of set-pieces to become a powerful dramatic continuity. Tempos are generally well judged, but stolidity can detract from the expressive impact. The close of Anne’s aria at the end of Act One is a case in point, while the graveyard scene in Act Three proceeds fitfully – with not quite enough emphasis on the music’s astounding motivic or textural ingenuity. Nor does the theatrical pay-off of the final ensemble have the effervescence needed (and the lighting at the very end should be adjusted so that the closing instrumental bars are not drowned out by applause!).

Conversely, the scene in the asylum is unerringly paced – its keen-edged pathos never becoming weighed down with unwarranted tragedy. Nearly six decades on from its premiere in Venice, “The Rake’s Progress” seems a more ambiguous work than even its creators might have envisaged. This production goes much of the way towards capturing that quality and it is quite likely Lepage’s intention that it scarcely matters whether the setting is Hogarthian England or McCarthyite America: the loss and transcendence that finally envelop the feckless main protagonist being mesmeric in visual and emotional acuity.