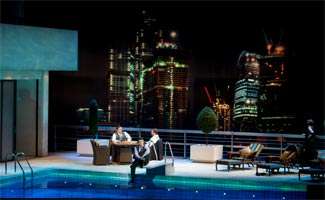 It’s both easy and hard to see why Rimsky-Korsakov’s romantic tale, set among the courtiers and hangers-on of Ivan the Terrible, should be so little known outside Russia. Easy because the nonsensical plot of “The Tsar’s Bride” tests our suspension of disbelief to breaking point; and because the first three of its four acts are a dramatic mess. Yet Rimsky’s lyrical melodic writing is so beguiling that it’s hard to fathom why this opera is only now receiving its debut staging by The Royal Opera. 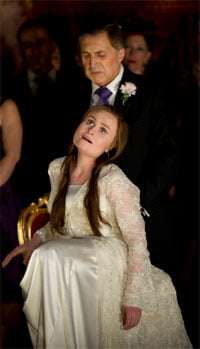 The tale of Tsar Ivan IV’s search for a bride leads the hapless Marfa Sobakina into madness thanks to the machinations and ministrations of her stalker, the secret policeman Grigory Gryaznoy (Johan Reuter, powerful and full-voiced). Inflamed by jealous desire, Gryaznoy wrests Marfa from the arms of her true love, Ivan Lïkov (Dmytro Popov, a fine tenor), after which things go from bad to worse. Pour not one but two magic potions into the mix, throw in a scorned mistress, keep the Tsar himself well away from the action (he wants Marfa for himself, remember), and it becomes clear that this opera has all the structural elegance of a bumble bee. Yet, like that fat little insect, “The Tsar’s Bride” still manages to fly.

Director Paul Curran makes his intentions clear from the outset, as the curtain rises on a modern-day restaurant where Gryaznoy is busy slicing up a recalcitrant prisoner. We are in a vividly-depicted post-Soviet Russia where underworld sleazebags rule the country’s roost; there will be blood, we surmise, and sure enough, by the final curtain there is a Jacobean slew of bodies on the carpet. Curran’s modernisation proves to be an inspired reclamation from oblivion of a battered old opera: far from being wilful Regietheater, the director’s vision helps knit the patches of Tyumenev’s libretto into something approaching a coherent evening of theatre. 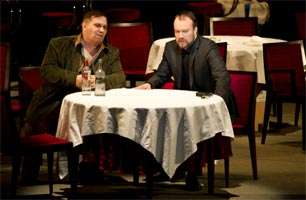 The production does have its problems, and many of these stem from the hyper-realistic nature of Kevin Knight’s designs. Opera is not a literal art form, so why encase it in literal settings? The act-by-act progression from shady restaurant though rough street corner to rooftop swimming pool and ultimately the fabulous Amber Room of the Tsars is so spectacular that on opening night an improbable round of applause crashed the opening of Act Three. Yet whenever a sea of choristers has to pour onto the stage through one of the narrow doorways, the production’s realism becomes a barrier to credibility. The visiting hordes take an age to enter and another age to leave – and all so they can deliver a folksong or two.

Curran does not always sidestep the risible, and unintended mirth arises from the ‘cat-like tread’ stomp of the secret policemen in Act Two and from Popov’s unfortunate “Titanic” moment on the swimming pool diving board in Act Three. As for Gryaznoy’s henchmen, they may drink like fish but oddly not one of them appears to smoke, notwithstanding what we know of bad Russian habits. Clearly, stage realism has its limits.

Maria Poplavskaya comes into her own late on with a startling ‘mad scene’ that gives her free rein for heavy-duty crooning and clawing. It’s Lucia dressed as Tosca, but she gets away with it through a virtuosic vocal display that turns her shrill upper register to advantage. Even more central to the production’s success is a secondary role, that of Gryaznoy’s mistress, Lyubasha. Ekaterina Gubanova depicts her character’s restlessness as a magnificent obsession with her philandering amorato, and vocally she stands out amid a generally strong cast. Gubanova’s unaccompanied folksong in Act One is a thing of wonder: rich-toned, expressively textured, heartbreaking and dead in the centre of the notes.

The tsar of the show is Sir Mark Elder, who conducts Rimsky’s colourful score with boldness and a secure, zestful command of its folk-inflected idiom. The Royal Opera Chorus is on magnificent form for him, while the Royal Opera House Orchestra has a ball with the rich Russian sound and persuades us that, for its orchestration alone, this fascinating rarity is more than worthy of House room.