Stravinsky
The Firebird – Ballet to choreography by Mikhail Fokine

Dancers of the Kremlin Ballet Company

To start with the good thing: the St Petersburg State Academic Symphony Orchestra under Alexander Titov played the scores used for these ballets superlatively, full of detail and nuance, of tangy Russian brass and characterful woodwind, of luscious strings and unashamed force when called upon. It was, as they say, worth the price of admission simply to hear these excellent musicians play so well. 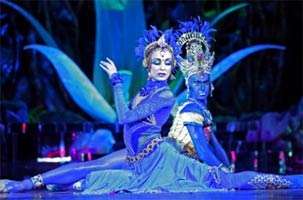 As for the dance, things were somewhat more mixed. Andris Liepa, late of the Kirov Ballet, now heads Les Saisons Russes du XXI siècle, which comprises soloists from the Mariinsky and Bolshoi troupes and dancers of the Kremlin Ballet Company. Until now, they have appeared annually at Paris’s Théâtre des Champs-Elysées, and now appear at London’s Coliseum. The reasoning behind their existence is to revive works of Diaghilev’s Saisons and Ballets Russes, that wondrous twenty year period between 1909 and 1929 when dance as an art form was changed forever, and was established as we know it now. Alas, much of their output has disappeared, lost after Diaghilev’s death or simply forgotten; a few remain in repertory in some companies, so Les Sylphides, The Firebird, Petrushka, Les Biches, Les Noces and Apollo (among a few others) are all that really remain. Liepa has taken to exhuming works long forgotten in performance, their designs known from the history books, but all else lost. It is a source of fascination how the Russians have sought to reclaim Diaghilev; he left Russia because he could not do what he wanted to do there and he never returned after the Revolution and neither did his stable of unmatched dancers – Nijinsky, Karsavina et al. The history of twentieth century ballet is Diaghilev’s and the artistic diaspora which resulted after his demise. Russia/The Soviet Union was left out of all these developments, resolutely going its own, politically-driven way. With glasnost, the dance companies of Russia came blinking out into the rest of the ballet world and immediately understood what they had missed. Their reclaiming of Diaghilev as their own is, I think, in some way to reinsert themselves into the mainstream of that history, and that is why the Mariinsky, the Bolshoi and others seeks to acquire Diaghilev-era repertoire. Liepa and his outfit seek to go one further, and to establish themselves as the repository of the Ballets Russes legacy, but with many works having to be re-choreographed, their chances of achieving their goal are frankly non-existent. 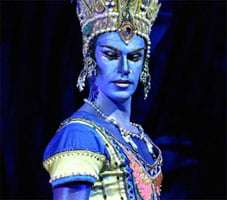 Thus, The Blue God (more correctly: le Dieu bleu) originally by Mikhail Fokine to commissioned music by Reynaldo Hahn, following Jean Cocteau’s libretto and in Leon Bakst’s designs. Despite the presence of Nijinsky as the Blue God and Tamara Karsavina as the Young Girl, the ballet did not find favour at its first performance in 1912 at the Théâtre du Châtelet and was rarely revived. Inexplicably, the Saisons Russes present this version of the work to a collage of overblown Scriabin and not Reynaldo Hahn (Hahn’s music was admittedly criticised for being too light-weight at the time). Additionally, nothing of Fokine’s steps survives, so English National Ballet’s Wayne Eagling was called upon to provide his version. He has stuck wisely to a lot of posture, gesture and mime, with movements rarely contemporary in their athleticism. So far, so good. However, what he has produced is, if truth be told, rather boring, repetitive and dull, certainly not strong enough for a work lasting 45 minutes. I suspect the real raison d’être was to recreate Bakst’s wondrous designs, although all is not well in this; some elements are well done (costumes have the correct Bakst clash of colours and patterns, and are well made), but the décor is rather cheaply done – would that more of the money had been spent on evoking the sacred pool before the cavern entrance and less on the frankly bizarre and wholly incongruous giant cobra with laser beams emitting from everywhere.

Of course, it takes an artist of enormous self-regard to essay one of Nijinsky’s roles, and there is none better suited than the Bolshoi Ballet’s Nicholas Tsiskaridze, who preens and struts the stage bejewelled like the Maharani of a wealthy Indian princedom. Tsiskaridze is tall and Nijinsky was short; Nijinsky was famed for ‘becoming’ each role he danced, Tsiskaridze for being Tsiskaridze. I found him preposterous. Ilze Liepa, Andris’s sister, danced the Goddess of Lotus, engaging in an interminable duet with the Blue God; her costume is not to any Bakst design I know of, and with bizarre jerky head movements she was less a lotus and more a demented quail. She threw herself fully into this nonsense. I liked Natalia Balakhnicheva in Karsavina’s part of the Young Girl, who flung herself around the stage with commendable desperation and there was much impressive posturing by Igor Pivorovich as the High Priest. It didn’t work particularly in 1912; it most certainly doesn’t work now. Best left alone.

At least The Firebird is still in performance, and Liepa even admitted during his pre-performance speech to the audience(!) that he had watched the video of Margot Fonteyn as the Firebird in the Royal Ballet production. He would do well to watch it again: not only was Fonteyn coached in the role by its originator Karsavina (and she, Fonteyn, went on to coach the next generation at The Royal, and so on) but the whole ballet was set on the company by Diaghilev’s own régisseur Serge Grigoriev in 1954. If there is any authenticity to be found, it is in that production. Liepa has, cleverly, made design the important element in ‘his’ production, claiming to have turned to the 1910 ‘original’ by Alexander Golovin (rather than the Diaghilev-sanctioned redesign by Natalia Goncharova of 1926). There is much of interest in this, and the first design explains that which is somewhat obscured by the later one: the knights who attend the Tsarevich and Tsarevna’s coronation in the final tableau are to be seen as turned to stone in the previous scenes, forming a back wall; the breaking of the egg which contains the soul of Kashchei the Immortal breaks the spell upon them and they are thus released. Choreography is somewhat approximate of what we are used to at the Royal, and telling details are, naturally, absent – only the passing-down of such information in each successive revival keeps them in place.

As Prince Ivan, Ilya Kuznetsov impressed greatly as a jack-the-lad prince – you could see him gladly grabbing a kingdom and the prettiest girl without a moment’s hesitation. Alexandra Timofeyeva was also good as the Firebird, but a few words to her could radically improve her interpretation: the Firebird is a wild animal, not a pretty one which flutters its wings decorously, and when she is caught by the Prince in the first scene, she is furious; there must be that barely supressed anger simmering away throughout. Alas, the corps de ballet were too few in number to create the impression of countless bodies, so vital for the Danse Infernale and the final tableau; Liepa seems to have lost the plot in the former, the movements and indeed the costumes more 1970s disco than Fokine’s grotesques.

In all then, a noble failure, but, let it be said again, worth being there for the orchestra’s superlative account of Stravinsky’s luminescent score.