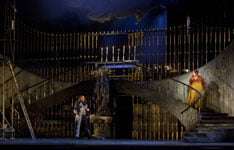 This was the first night of the first revival of Jonathan Kent’s 2006 production that replaced the world-famous 1964 one by Zeffirelli that had opened with the legendary casting of Callas, Gobbi and Cioni. Even at the time of its first performances there were comments that the effective old production had been replaced with a rather similar and traditional production in pristine monumental sets, and that an opportunity for a different perspective has been lost. Was this a collective reaction to change or a justified criticism?

This performance ultimately left one with the impression that this production may take a few revivals to settle into the repertory. Paul Brown’s designs are attractive enough, if rather dark, but in Act One they hamper rather than help the narrative as directed and probably responsible for one major musical miscalculation at the end of the act. The Attavanti chapel of the Sant’Andrea della Valle is evidently located both below and behind one of the major altars of the church. This leaves the chorus and extras representing the churchgoers and clergy set both above and behind the centre of action but also separated from Scarpia as he sings his ‘Va Tosca’ passage to the backing of the ‘Te Deum’. The musical swell that should occur as he joins the congregation’s prayer with his voice riding the choral ensemble from within simply does not work sonically in this staging. Puccini knew what he was doing and you need to follow him! The double staircase that leads upwards from the chapel to the body of the church allow variation in exits, and one rather nice touch as the distraught Tosca leaves after her initial encounter with Scarpia is to meet him again at the top of the stairs. But, again, this design means that the sacristan was only just out of the chapel before the music tells you that Angelotti has emerged from hiding. It all becomes a bit frantic. It is also rather dark. “Tosca” does have some light and shade and even humour in this first act and the oppressive lighting, although atmospheric, does rather crush that aspect. From then on matters improve. The Act Two designs, again monumental, are rather better set, and those for the final act on the top of the Castel Sant’Angelo do exactly what it says on the tin, and are marvellously lit.

From an orchestral perspective this was an interesting if rather cool realisation of the score, one abounding in subtleties. The opening Scarpia theme did not blast one out of one’s seat, and some of the lighter music of the first act really danced; the twists and turns of the Tosca/Cavaradossi interplay as he tries to hasten her departure had a propulsive and lyrical flow; and many of Puccini’s exotic orchestral woodwind and percussion touches really emerged from the orchestral textures. The section where Cavaradossi first voices his dislike of Scarpia to Angelotti was a notable instance in point. Mikko Franck kept the volume low and the tension high at this point – only uncoiling the musical spring at the very end, and thereby really allowing a musical depiction of the villain before we meet him. He also managed the opera’s ultimate pages very well managing to avoid an undignified musical scramble to Tosca’s final moments before her jump. It’s an odd passage of the score and Franck made one aware of that. Perhaps some of the red-blooded verismo extremes were lacking at times, surely an integral part of this piece. Thus a final verdict of a cool performance overall is not a whole-hearted recommendation. The orchestral playing was very fine – invidious to pick parts out but lovely sinewy strings and fantastic clarinet playing really distinguished the opening of the final act. 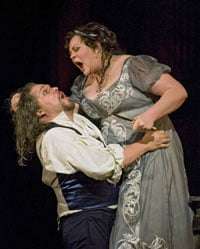 Vocally the cast is something of a mixed bag. Violeta Urmana is a major talent to be sure, and her luscious middle register is really ear-catching (she started her distinguished career as a mezzo). Her top notes are not always the most beautiful and open, but she attacks them fearlessly, and her ‘Vissi d’arte’ had considerable poise. What she did not really manage to catch initially is the capricious quality of the character. Tosca on her first appearance should be young, playful, coquettish and a bit of an actress – to really gain the audience’s collective heart. The character’s innate jealously or insecurity should be there, of course, to be made light of by Cavaradossi. Urmana’s Tosca was a bit too forceful from the start, making her reaction to Scarpia’s emotional torture less credible. 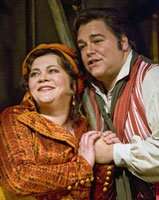 It did not help that there seemed to be little spark between her and Cavaradossi. Salvatore Licitra has the right sort of voice for this role – clean, open and plangent. Sadly, he seemed to be singing and acting on auto-pilot, and was at times decidedly graceless. Cavaradossi is supposed to be an artistic chap after all.

One could have forgiven this Tosca for finding Scarpia appealing and magnetic. This production however seems to regard and portray him as a thug, rather than as a manipulative and educated aristocrat with a sadistic side to him. Mark Delavan, who has sung other Puccini roles in this house to acclaim, was not at his vocal best here. The voice seemed a little rough in patches and lacking in its usual magnetism and ring. As mentioned earlier one of his big moments was stymied by the staging, but he also managed to make something of a meal of ‘Se la guirata fede…’, the passage where the character declares his lust for the diva.

Of the minor characters Robin Leggate’s experienced and detailed Spoletta was another gem from his cupboard of cameos, and Carlo Gigni’s Angelotti was sung with real Italian flair – a shame he does not hang around for longer. Enrico Fissore’s fussy and rather craggy-sounding Sacristan was surely an unnecessary import. Krzysztof Szumanski’s Sciarrone might have made more impact had one been able to see him in the gloom, but Declan Hall’s clean treble made something of the, usually tiresome, off-stage shepherd boy.

Oh dear – this review seems rather negative. Although the principals may be mismatched and some of the faults of the staging are already grating, it was in truth rather more enjoyable than might be seemed. A couple of children near me were absolutely transfixed. Converted, I hope. And “Tosca” itself is indestructible.