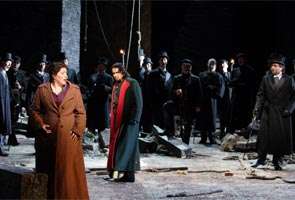 Back for its second revival, The Royal Opera’s “Un ballo in maschera” continues to delight and entertain, Daniel Dooner proving a safe pair of hands to oversee Mario Martone’s 2005 production.

After a gestation troubled by pre-Italian revolution censors, Verdi’s tale of tragic love and betrayal was eventually set in the somewhat unlikely location of 17th-century Boston, Massachusetts. Though a surviving original libretto apparently stipulated the slightly later period of early 18th-century, Martone’s lavish production is set later still, in an opulent mid-19th-century. Sergio Tramonti’s sets are excellent – stand-out set-pieces being the eerie cage-like structure inhabited by Ulrica, the mysterious fortune-teller; the bleak rubble-strewn wasteland of the gallows scene, dominated by a huge central cross; and – saving the best until last – the ballroom, with its vast mirrored back-wall which angles itself ingeniously to reveal an aerial view of dancers and musicians below the main stage.

Heading a strong cast is sensational Mexican tenor Ramón Vargas as Riccardo, the Governor of Boston whose plotting enemies are revealed even before his entrance. Vargas reigned supreme, his effortlessly heroic singing oozing confidence and charisma. His final-act aria before the ball, contemplating premonitions of death, was a mesmerising tour de force. 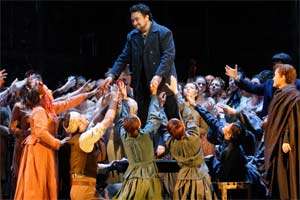 Amelia (wife of Riccardo’s secretary and friend Renato) is the forbidden object of Riccardo’s love. Angela Marambio, making her Royal Opera debut, played her with subtlety and pathos. Though lacking a particular beauty of tone, she made up for this with singing of terrific power and immense feeling – her aria to Renato begging to be allowed to see their son for the last time before he kills her was especially poignant.

Renato was impressively sung by Dalibor Jenis, his silken baritone and commanding presence lending a sinister sense of menace to the character once he discovers his love has been betrayed.

American soprano Anna Christy made a lively Oscar, the pageboy, with bright, clean tones and impeccable coloratura. Her portrayal sometimes seemed a little over-familiar with her master, Riccardo; but it was hard to argue with such a cheeky smile. Ulrica, the fortune-teller, was played masterfully by Elena Manistina, her rich mezzo voice appropriately captivating and otherworldly.

The supporting cast was excellent, as was the superb ROH Chorus, which displayed precise ensemble and gloriously full sound. Under the inspirational conducting of Maurizio Benini the ROH Orchestra played like demons. Benini clearly has Verdi’s music running through his veins, the music infused with an indisputably authentic feel.

A thoroughly enjoyable evening, this enthralling production shows all the hallmarks of becoming a Royal Opera classic.