Verdi
Simon Boccanegra – opera in a Prologue and three Acts to a libretto by Francesco Maria Piave after the play by Antonio García Gutiérrez [1881 version with libretto revised by Arrigo Boito; sung in Italian with English surtitles] 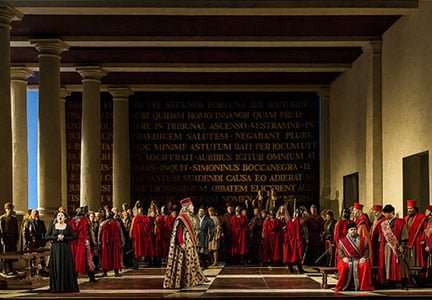 Verdi described his opera of Simon Boccanegra as sad and desolate. Elijah Moshinsky’s 21-year-old massive production robustly endorses the composer’s appraisal. The incisive perspectives of Michael Yeargan’s imposing set, dominated by a colonnade suggesting the brooding grandeur of renaissance Genoa, make the isolation of the five lead roles entirely credible as they struggle to free themselves from emotional and political restraints. The rare glimpses of sea and sky, enhanced by John Harrison’s ravishing lighting, only underline the trap-like claustrophobia of Verdi’s unremittingly dark masterpiece. Although this is the staging’s sixth revival, it looks fresh, and it presents the complexities of the time-jumping story with admirable directness. It’s one of the Royal Opera’s great and grand Verdi presentations, in the same memorable league as Visconti’s Don Carlo of blessed memory. 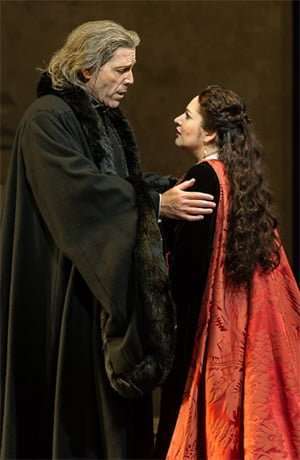 And it has a cast and a conductor to match. Thomas Hampson was riveting as Boccanegra, portraying his 25-year leap from lusty pirate to middle-aged Doge with conviction. It helped that he looked the part, and his singing completed the portrait of the character’s hard-won nobility. ‘Plebe, Patrizi! Popolo’ in the Council Chamber scene (added by Verdi to opera’s revision), as much Verdi’s gift to the baritone voice as Otello’s ‘Esultate’ is to the tenor’s, established Hampson’s grip on the stature of the role, but he was even more involving in the ‘recognition scene’ between father and his long-lost daughter Amelia, which rapidly escalated into an almost Wagnerian rapture. Hampson’s clarity in the declamatory passages only made the surging lyrical outbursts, notably in the Act Two trio with Amelia and her lover Adorno, all the more gripping, and he was very moving and heroic in Boccanegra’s expertly ‘death scene’. Sometimes you’re a bit too aware of the Hampson charisma, but this Boccanegra was truly compelling.

The Russian soprano Hilda Gerzmava brings the same distinction to Amelia as she has to Tatyana and Mimi for the Royal Opera. Her voice may have a bit too much steel for some tastes, but as the abandoned, abused heroine she effortlessly complemented Hampson’s intensity in the father-daughter reunion. She showed off the warmer range of her voice in her Act One aria (unforgettably staged by Moshinsky and Yeargan in an image that says it all about her isolation), and was a commanding presence in the Act Two trio.In an opera dominated by two baritones and a bass, the tenor portraying Adorno has his work cut out. Russell Thomas, making his Royal Opera debut, easily rose to the challenge. I first heard him last year in a concert performance of Donizetti’s Belisario and was hugely impressed, and now even more so by his Adorno. Singing with effortlessly heroic tone and graced with ringing top notes, he transformed what can seem an underwritten role into one of thrilling vitality and passion, and any doubts that he’d have problems transferring his bel canto skills to virile, Verdian heft were quickly dispelled. He’s quite something.

Ferruccio Furlanetto, oddly with less of a vibrato as the older Fiesco, dominated the ‘Prologue’ with his sturdy, black-toned bass, and was very moving – as was Hampson – in their eventual reconciliation, one of the emotional highpoints of the opera. Dimitri Platanias didn’t exactly transcend the uncomplicated, melodramatic villainy of Paolo, Boccanegra’s treacherous henchman and with a loathsome lusting for Amelia, but his singing was expertly bleak and his acting terrifically serpentine, like a blend of Rigoletto and Iago.

I cannot praise Antonio Pappano’s conducting highly enough. He really knows what to do with this dark music, and the Orchestra of the Royal Opera House, always on top of the beat and completely inside the music’s expressive reach, seemed more an extension of Pappano’s reading than merely playing it. It was a marvellous evening.