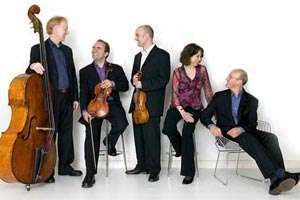 Two of these piano quintets dispense second violin in favour of a double bass: this wasn’t a predictable concert – and included Max Jaffa (and his violin) … and not to forget Claude Hobday. (All will be revealed.) This was a celebratory occasion – Simon Blendis offered a witty spoken introduction to reminisce (only two of The Schubert Ensemble’s founding-members are still present, the lead violinist not being one of them – far too young!) and to look ahead: this concert extended to previewing the group’s latest recording. (More on that, too.)

But for Johann Nepomuk Hummel (1778-1837) we may not have had Schubert’s ‘Trout’ Quintet, for it was Hummel that coined the combination of piano, violin, viola, cello and double bass, Schubert’s evergreen ‘Trout’ being commissioned for the same forces as Hummel’s (then) very popular example. Hummel’s writing affords many textural and melodic delights full of merry ditties and simple eloquence (with the occasional darker undercurrent in the first movement) and requires affection and nimbleness from the performers – which it received in spades, William Howard playing with winning dexterity and his string colleagues offering ideal balances.

If Hummel – friend of Mozart, Beethoven and Schubert, and Haydn’s successor to the Esterházys – has fallen from grace over the centuries (rather unfairly), Ralph Vaughan Williams’s music (hopefully) remains in the ‘great’ category. Having left the Royal College of Music (in 1895), he composed numerous pieces that he later withdrew and kept from publication during his lifetime and issued a ‘posthumous’ embargo. It wasn’t until the 1990s (three decades and more after Vaughan Williams’s death) that the composer’s widow, Ursula, allowed performances of some chamber music, The Nash Ensemble recording them for Hyperion in a handsome 2-CD set (CDS 67381/2).

One such is the 30-minute Piano Quintet (also with double bass rather than second violin). Completed in 1903 and revised a couple of times before the 1905 premiere – in which the double bassist was Claude Hobday (who recorded a ‘Trout’ with Artur Schnabel as pianist), Hobday’s now 300-year-old instrument currently played by Peter Buckoke.

Vaughan Williams’s Piano Quintet may be stylistically nomadic (but not anonymous) but is full of good things. If one did not know the composer’s identity, then a good guess would be ‘French, 19th-century’, César Franck (actually Belgian) and Chausson or an acolyte of them. Robert Schumann is momentarily suggested in the slow movement and, closer to home, there are also many passages that cry ‘English, early-20th-century’, not least a wonderful ‘pastoral’ idea that serves as ‘second subject’ in the first movement; a gorgeous tune, if maybe more Herbert Howells than Ralph Vaughan Williams. However, the arresting ideas and skilful writing can only impress the listener.

It is probable that the composer was aware that the work (and some others) lacks a recognisable stamp – he may also have wondered about the overly-long middle movement and the lack of integration across the closing Variations – but there is splendid music along the way and it would be our loss not to have access to it. Good news, then, that The Schubert Ensemble has recorded it (together with “On Wenlock Edge” with tenor Mark Padmore) for Chandos (CHAN 10465), an April release. It will sit well with the Nash’s version.

Brahms’s magnificent Piano Quintet (farewell Peter Buckoke, welcome Alison Dods) was less engaging as a performance. With Jane Salmon now sitting outside right, her sound went across the platform rather than into the audience; the result was an imbalance between cello and violins. Furthermore, the lack of an exposition repeat diluted the first movement – while such observation should never be slavish, surely this particular repetition is mandatory, Although the musicianship was patrician and William Howard was consistently ‘in picture’ without ever dominating (he and Ian Brown of The Nash are absolute piano-masters of chamber music) there was also something stylised and self-consciously ‘beautiful’ about this account that overlooked the grittier aspects of the music. One hesitates to criticise such beguiling music-making – and there were further glints and tints in the slow movement – but Brahms this translucent and lightly bowed failed to get under the music’s skin despite a more devilish response to the scherzo and some nice bucolic touches in the finale, which was otherwise too amiable and lacking desperation in the coda.

As for Max Jaffa … his violin is now in the hands of Simon Blendis. All the players returned to let their hair down with an Eastern-promise ‘novelty’ number (shades of Hora Staccato), either by Jaffa or associated by him, that translates as “Goody, goody”. It was too, and further proof of The Schubert Ensemble’s versatility.