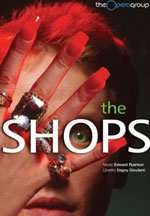 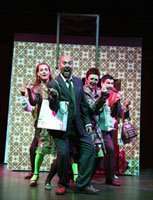 Most of us collect something, be it books, CDs, DVDs, Dinky toys, spoons, eggcups, butterflies, photographs or whatever. If you’re really wealthy you collect great works of art or sports cars or gold. There is a psychological reason behind why we collect these inanimate objects of our affections, as they replace other things, perhaps the people that we cannot collect. Of course Don Juan did the opposite: he collected women and by all accounts had the best collection ever. Each acquisition is another conquest that goes towards getting a complete collection – whether it is a Picasso, a Beethoven symphony, a first edition or a rare stamp.

The hero of “The Shops” is Christoph Schmalhans who you might describe in general terms as a philatelist. But he is more than just a stamp-collector because he steals his objects from the collections of famous museums and galleries. A shop assistant by trade, he, along with his girlfriend Francesca, is obsessed by acquiring as many stamps as he can. Francesca, a shopaholic by nature, provides the diversions while Christoph pilfers his first-day covers; she is rewarded by the money Chistoph gives her to go and “buy something nice for yourself”. However, she is so label-orientated that something “nice “ always comes at a price – nothing less than £150. In reality she is a collector of famous-brand bags. Meanwhile, having been pursued by a stamp-collecting policeman, Christoph goes on trial. 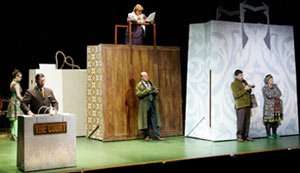 “The Shops” seems to be a one-joke show where the joke runs out very quickly. Edward Rushton’s squeaky-gate score is not exactly appealing and, because the relatively small ensemble plays over the singers, much of the libretto is lost. There is one charming and tuneful piece when the whole cast takes to the dance floor and one wishes the rest of the score had been as delightful. The piece looks good in Soutra Gilmour’s designs, with every set and piece of furniture coming out in the shape of a shopping bag. Even the programme is a shopping bag!

“The Shops” is described as “part satire on rampant consumerism, part psychological thriller” but it really fails on both counts. It’s not nearly funny or cutting enough to be satire and the psychology behind it is dubiously skin-deep. Every so often the cast assembles for a meeting of Shopaholics Anonymous, but here again the jokes are too obvious. However, one cannot complain about the performers who do their best with the material. I just wish it had been more approachable and less knowing. Despite the first night audience’s partisan response, this really is a major disappointment.