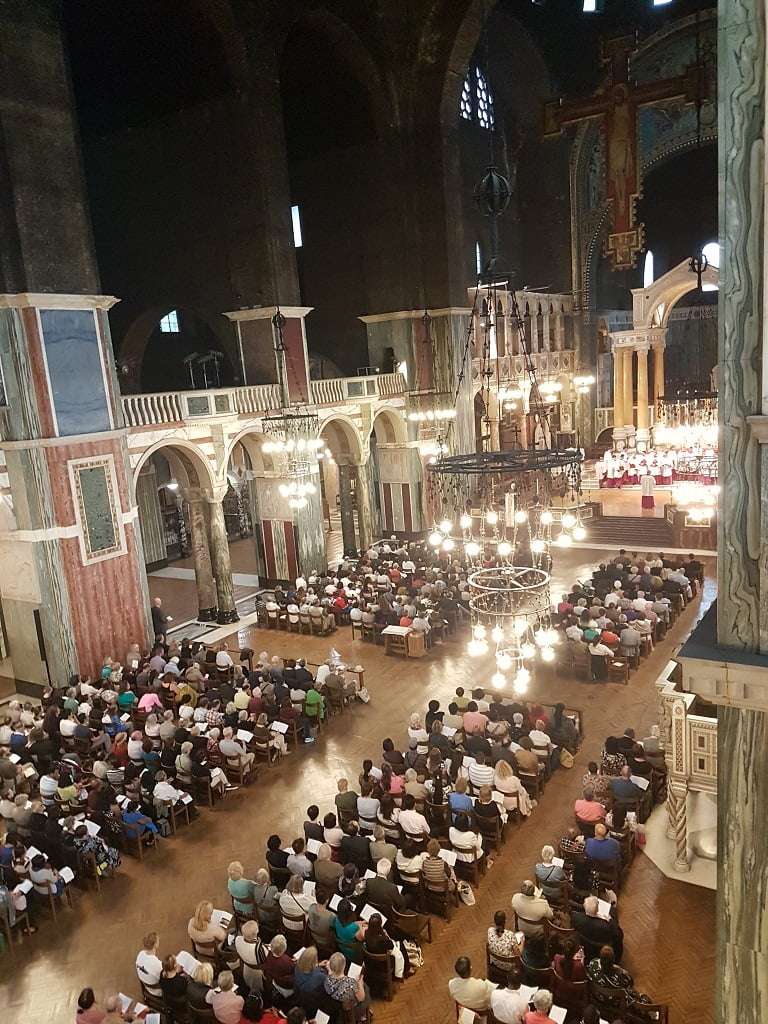 The Sistine Chapel Choir has been in London, performing at Buckingham Palace, St James’s Palace, Westminster Abbey and Westminster Cathedral. It has raised its profile in recent years under the tireless leadership of Monsignor Massimo Palombella, has a recording contract with Deutsche Grammophon and tours widely. Palombella is extraordinarily energetic: following the score on an iPad, his arms circle rapidly, he chops and saws the air at times with tremendous force, then freezes momentarily when drawing out a particular moment of detail.

I counted twenty men and twenty-four boys; I was struck by some of the attractively quiet and inward singing, as in the opening Gregorian plainchant, though not entirely avoiding blurriness. In the various short pieces by Palestrina and Victoria there was a refreshing open-hearted emotionality in the singing, responding to the ecstatic meaning of the Latin – we are at the opposite end of the spectrum from the English tradition of restraint and pinpoint harmonic clarity, boys and adults equally wrapped up in the meaning of what they were conveying, with all manner of crescendos, but perhaps at the expense of some of the beauty and stillness.

In Lassus’s Magnificat Primi Toni the singers were placed around the Gallery and the unmistakably Italianate timbre of the sung Latin was striking – warm, richly communicative, and very human. The soloist sang with conviction and great resonance; the other groups of singers, however far apart, felt connected and were actively responding to each other. It was very affecting and the spiritual high of a concert which otherwise seemed a curiously secular event, not helped by the many mobile phones being held up.

Palombella, with his unrivalled access to the Vatican’s manuscripts, is responsible for unearthing the earliest edition of Allegri’s Miserere. Most of us will be familiar with the version which has late-nineteenth-century pyrotechnics added to show off the high-Cs of the castratos of the day. Aiming for the best of both worlds, Palombella started off with the unadorned original, which is very affecting. The basses, altos and trebles were all exquisitely separated and in this simpler setting underlined the plaintive nature and meaning of this psalm. Stylistically jarring, but certainly interesting, was the transition then to two stanzas from the better-known version with the falsettists in startling form singing the high notes.

The concert had started with plainchant joy and concluded with Monteverdi’s take on joy, Cantate domino. Throwing the cat amongst the pigeons, Palombella’s approach to Renaissance polyphony will doubtless ignite further the debate as to the ‘right’ way to perform these endlessly revealing works.