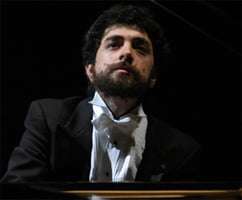 So, Angela Hewitt isn’t the only pianist that plays Bach! And, as Konstantin Lifschitz (born in Russia in 1976) demonstrated here, Bach’s music yields persuasively to an approach that goes beyond revealing the notation ‘as writ’ (just as it does to transcription, which includes – here – from harpsichord to piano, and – generally – a ‘world away’ approach).

At a time of year when some in football are calling for a break rather than undertaking a full Christmas/New Year programme of matches, a concert at this festive period also suggests a lack of rest. But, rather than recharge the ears and take some respite, we (including at least one distinguished pianist and some people with severe bronchial problems and a complete lack of courtesy to others – and musical silence – through their interruptions) turned up in droves: this was, after all, no Christmas musical flotsam but the whole of Book II of Bach’s Well-Tempered Clavier, 24 further Preludes and Fugues in all the major and minor keys – or, if you prefer, the second half of ‘the 48’.

Having played Book I this time last year and the Goldberg Variations prior to that, Lifschitz made an inevitable return to Wigmore Hall for what today might be termed as “25-48/48”. Lifschitz did so with the music as a part of him, every note learnt, absorbed and returned as part of a personal voyage, a modern piano used to its full potential (and sounding magnificent). Yet, for all Lifschitz’s intervention and Romantic leanings, his deep devotion to the cause rarely allowed the listener to be disturbed by mannerism. Pauses seemed arbitrary, though – some Fugues were attached to Preludes, others were given gaps, while some Preludes seemed more attracted to the preceding Fugue than the same-key one that followed. Over a long evening (150 minutes of music, thereabouts), not every Prelude and Fugue was a monument unto itself.

Probably, given their improvisatory nature, Lifschitz was most convincing in the Preludes, even if expressive freedom occasionally rendered the music as shapeless but without threatening a lack of security to the whole. Greater variety of dynamics would have been welcome – although when they came it was with meaning – and Fugues were built inexorably, sometimes with an edge and no lack of angularity if not always with all voices remaining distinct and with the ‘fantasia’ aspects stressed – there was nothing academic about Lifschitz’s approach.

Bach’s Second Book of Preludes and Fugues is notable for its economy of means, if no lack of variety, something which Lifschitz respected without being restricted by it, alive to the music’s rigour as much as its possibilities (when he could open-out his heart, he did) – whether a gentle siciliano or a demanding toccata or Fugues that announced themselves with force or in tranquillity. Come the lucent final pair of Preludes and Fugues (respectively in B major and in B minor), Lifschitz’s clarity was admirable and his joy at reaching the conclusion was palpable.

It was quite something to hear this artistic edifice brought so alive – for although the Hall was darkly lit, as befits a solemn ceremony, this was also a life-enhancing experience, one that seems more so after the event. Occasional misgivings aside, Bach and Lifschitz are ‘an item’ of deep rhetoric and profound searching.