The Wizard of Oz

Music and lyrics by Harold Arlen and E. Y. Harburg, with background music by Herbert Stothart

Book by L. Frank Baum adapted by John Kane for the Royal Shakespeare Company, based on the Metro-Goldwyn-Mayer film musical 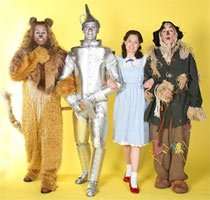 It may not be the best place to see a theatre show, because the Royal Festival Hall is essentially a concert hall. It may not be the right time of year to be enjoying a pantomime because “The Wizard of Oz” is usually performed over Christmas. It may not be the best staging you’ll ever see of L. Frank Baum’s perennially favourite book first published in 1900. Having said all that, however, there is still a surprising amount to enjoy in Jude Kelly’s Southbank Centre summer production.

The story has had many productions since it first appeared in New York in 1903 although not always with the music written for its most famous incarnation, the 1939 MGM musical with Judy Garland as Dorothy. The St Louis Municipal Opera presented it in 1946 with the MGM songs. The Royal Shakespeare Company staged it in 1988 and this is the version now in the RFH, in an adaptation of the book by John Kane and with the music written for the film by Harold Arlen, with lyrics by E. Y. Harburg and incidental music by Herbert Stothart. The prequel, “Wicked”, which tells the story of the witches before Dorothy met them, is still running at the Apollo Victoria, although it has nothing to do with the MGM film.

Jude Kelly and designer Michael Vale have tried to reproduce the appearance of the MGM film, so that Dorothy looks like Judy Garland in her little blue dress and ruby-red slippers. Siân Brooke makes a good Dorothy, who is quite feisty and yet also vulnerable. She won’t take any nonsense from the awful Miss Gulch who threatens to have our heroine’s dog Toto put down but, when she runs away from home, Dorothy is also quite innocent, meeting a phoney magician on her journey and being taken in by him.

This is a time of pre-political correctness when little girls still spoke to strangers and only the beginning of Dorothy’s adventure outside of Kansas. Running home with Toto she gets caught in a tornado and ends up in the Land of Oz where she meets a Cowardly Lion, a Tin Man and a Scarecrow. They all follow the Yellow Brick Road to find their way back to Kansas, encountering a Good Witch and a Wicked Witch en route to the Emerald City where they meet the fount of all wisdom, the Wizard of Oz.

If the Festival Hall’s wide stage (no wings) is a vast hole waiting to be filled, this production manages to disguise the fact that it is an awkward shape. If the special effects are none too special, with perfunctory drawings acting as storytelling images, the sets are more than adequate, and are atmospherically lit by Mike Gunning. From the storm and gloom of the initial scenes in Kansas things brighten up as Dorothy nears the Land of Oz. However, it is difficult to agree with her when, on entering the Emerald City, Dorothy asks, “Have you ever seen anywhere so beautiful?”. The Festival Hall depiction of the Emerald City truly lacks the sparkling greenery of the film version.

Jonathan Gill’s 20-piece band has all the pizzazz of a movie orchestra and its sound is terrific. “The Wizard of Oz” has a wonderful score (Arlen and Stothart) and in combination with scores of children playing the Munchkins, the songs get a good deal, too. Classics such as ‘Ding dong the witch is dead’, ‘We’re off to see the Wizard’, ‘If I only had a heart’ and ‘Merry old Land of Oz’ are charming and come up freshly minted. ‘Poppies’, in which Dorothy and her pals seem to get high or at least very sleepy, brings the first half to a strange close. The most well-known song, ‘Over the rainbow’ (nearly cut from the film!) became Judy Garland’s signature song. Here Siân Brooke delivers it well enough but without the essential, catch-in-the-throat pathos that Garland brought to it.

The other members of the cast are all very skilful and replicate the MGM personnel to a tee. Roy Hudd is a delightfully dotty Professor Marvel and the Wizard, Adam Cooper plays The Tin Man with charismatic presence, Hilton McRae’s Scarecrow is a delight as he keeps losing his stuffing and Gary Wilmot gives a marvellous account of the Cowardly Lion that could have given Bert Lahr (in the film) a run for his money: it’s a beautifully witty and clever characterisation. The two Witches (Susannah Fellows and Julie Legrand) have their moments but, perhaps inevitably, the show is stolen by Bobby, a West Highland terrier, playing Toto, who is mesmerising in whatever he does and who hardly ever puts a paw or a bark wrong. “Never work with children or animals”, someone once said. Well, this show is packed with both and it survives as a piece of jolly good entertainment for the summer holidays.