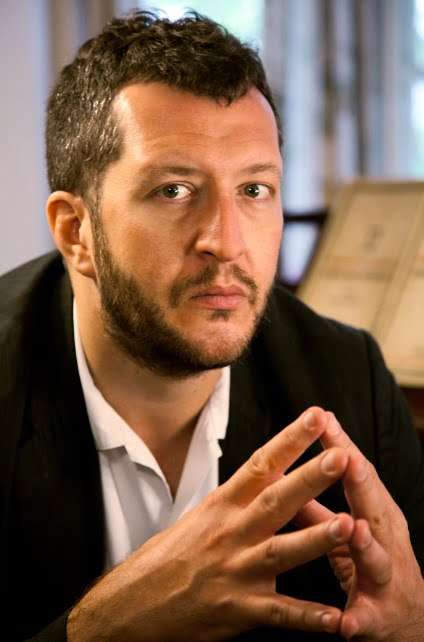 Part of the extraordinary celebrations for the arrival of Sir Simon Rattle at the helm of the LSO, this programme put together by Thomas Adès was typically varied. Certainly, given his wide-ranging proclivities, the embracing of Castiglioni and Golijov was no surprise, whereas the inclusion of a piece by John Woolrich perhaps nodded to the days when both composers were published by Faber Music.

Lots of stage reorganisation meant it was quite a protracted evening: the payoff was in the diversity. It took longer to read the programme note for Per Nørgård’s Hut ab! (Hats Off!) for two clarinets than it did to experience the piece. Whether Ausiàs Garrigós Morant and Andrew Farnden deliberately did not bow or whether this is errant stage manners I know not, but they did deliver a splendid performance, brilliant in execution and including tremendous control of dynamics.

Described merely as “voice”, Mirjam Mesak joined the two gentlemen of the clarinet for Nicholas Maw’s The Head of Orpheus. We need to hear further of his music: Rattle has been a keen supporter. This and several other items here stem from a song collection started in the 1980s by Woolrich and Mary Wiegold of songs for voice with any of five instruments (viola, cello, double-bass, two clarinets). Mesak had the measure of Maw’s sometimes disjunct line in his setting of text by Robert Kelly, while the pianissimo clarinet opening was beautifully done.

Setting Emily Dickinson, Judith Weir’s The Alps features the astonishingly pure soprano of Harriet Burns. Joined again by Andrew Farnden and now with the viola of Matthew Jones, viola doubled voice with clarinet providing figuration; the harmonic setting was palpably warmer for the mention of Italy. Beautifully constructed, Weir’s piece led into Birtwistle’s now surely classic Célan settings. Soprano Patricia Auchterlonie was joined by Morant and Isha Crichlow on clarinets, Jones, Tobias White on cello and Alexandre Cruz Dos Santos (double bass) in a performance of stunning beauty and understanding. Auchterlonie has the technique and the grasp of idiom to bring this piece off; Richard Baker’s conducting ensured perfect ensemble.

Post-interval, a succession of shorter pieces. Mimi Doulton’s soprano graced Castiglioni’s Vallis Clausa (joined by five clarinettists), a piece of crystalline delicacy; it contains a long silence, held perfectly by the performers before a simply gorgeous coda unfolds, all in long-held notes. Two pianos (Nathan tinker and Ben Smith), one tuned a quartertone down, were joined by two basset horns in György Kurtág’s seven-minute celebration of the eighty-fifth birthday of Sándor Veress, Életút. There was superb concentration by the players in this veiled music before Golijov’s Sarajevo, a setting of a Sephardic folksong, found soprano Harriet Burns clear and powerful against a busy surface provided by clarinet, viola, cello and double bass.

Sadly, John Woolrich’s A Farewell for clarinet, viola and piano, while brilliantly performed, is of minimal invention. An echo piece, the skill in playing was rather in advance of the inspiration. Finally, Adès’s arrangement of Madness’s ‘Cardiac Arrest’; great fun and a superb transcription, recognisably Adès while retaining the flavour of the original. The performance standard was of the very highest tier, Baker conducting when needed with superb clarity.