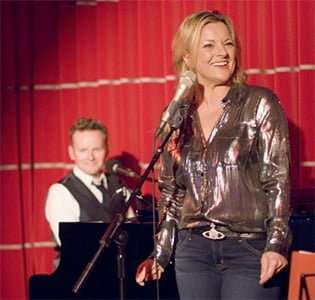 For their second week-long residency at The Crazy Coqs, Claire Martin and Joe Stilgoe have assembled a programme celebrating Paris in Spring, interspersing classics from Charles Trenet and Jacques Brel with pieces from that most famous of Francophiles, George Gershwin. It was a strange and enjoyable experience to hear music as frothily American as ‘S’Wonderful’ alongside Trenet’s speedy ‘Boum!’ – performed in French for added comic appeal.As often happens when these two wildly different musicians come together, it is a set of many colours. Martin’s mellow, lovely tone perfectly suited Brel’s ‘If You Go Away’, which she sang in English. “I’ve chosen to channel a bit of Dusty”, she admitted, and matched the songstress for simple, unadorned emotion.Stilgoe, who now knows Martin’s voice well after a partnership of two years, added to the programme a work of his own that showcased Martin’s creamy, hypnotic singing. He accompanied her sympathetically, and lent his own voice to duets. In Arlen’s ‘I Have a Feeling’ they matched their voices perfectly. Elsewhere he provided a foil for her teasing scat singing.Ever the showman, Stilgoe hides behind comedy. He won the audience over with merry accounts of fast songs, explaining that “I used to do a lot of weddings. I’d still like to do a lot of weddings…”. He interrupted his rendition of the much loved ‘La Vie en Rose’ with a silly trumpet impression and the comment “dignity gone”. Although fun to watch, this joking treatment entirely undermined the song, which is one of the most heartfelt in the catalogue. It is also one that would have suited Martin’s voice like a glove. At the keys, Stilgoe played with both speed and subtlety, imitating Hollywood orchestras one moment and providing a gentle bed of chords the next.A creation by Joni Mitchell felt out of place, but brought out an unusually energetic performance from Martin. A classic Rodgers & Hammerstein number was given a new twist as the pair swapped between waltz and swing. Several numbers were introduced with affectionate reference to Ella Fitzgerald: unhelpful as Martin’s powder-light voice is entirely unlike the American’s grand sound.The emotional peak of the night came in Michel Legrand’s ‘What Are You Doing the Rest of Your Life?’, the Oscar-nominated theme to the film The Happy Ending. The pair dedicated their performance to the star of that film, Jean Simmons, whose memorial service included the song. It was both a brilliant and sad rendition.