The Winter’s Tale – ballet in a Prologue and three Acts to choreography by Christopher Wheeldon after William Shakespeare’s play [co-production with the National Ballet of Canada; world premiere performances] 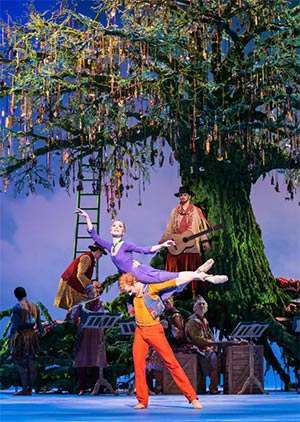 The Royal Ballet has another hit on its hands in the form of Christopher Wheelson’s new The Winter’s Tale. After the successes of Alice’s Adventures in Wonderland with the same creative team, the formula has been repeated, again to good effect. Certainly this constitutes a ‘good night out’ in almost anyone’s book, providing a clear storyline, sumptuous sets and costumes, and The Royal Ballet in enlivened and committed form. Whether it is a work which will last in the repertoire after the initial excitement dies down, whether its roles will provide much in the form of stimulus to subsequent artists eager to place their own mark upon them, will only be revealed by the passing of time.

It is also a very modern ballet, a twenty-first century ballet which acknowledges its roots in the last two centuries in terms of form and stage conventions, but most definitely of its time. The settings are nothing short of stunning. Bob Crowley’s astute mix of the physical (with great, moving П-shaped constructions, staircases, a simply beautiful stage-wide tree for the Bohemia scene) and the virtual (the backcloth bearing projections of clouds, snow, a tree passing through the seasons, a tempest at sea) is simply masterful, and all praise to Daniel Brodie, the video designer. His costumes do not define place or time, but clearly delineate the differences between the cool-hued acts with the warm-toned Balkan middle act Bohemia, and they are sumptuously made, a panoply of courtly silks and peasant patchwork. Throughout, the masterful lighting design enhances and deepens the stage picture. 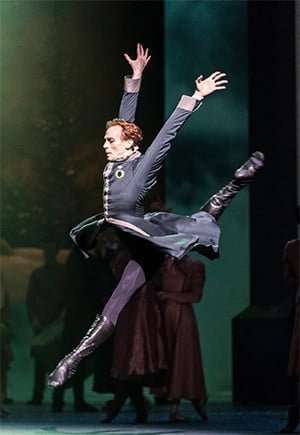 Joby Talbot’s score comes as no surprise to those who have heard his other work for the ballet stage, although he seems to have lost some of the bite that he gave Chroma in 2006, and opted for a sweeter, more saccharine approach. It is the weakest element in this production, lacking the requisite asperities to convey the deep tragedy of the first act (Wheeldon conflates Shakespeare’s first three into one, preceded by a made-up and much needed explanatory Prologue) and fatally lacking ‘big’ melodies to accompany the main pas de deux. It is very much 21st-century music, rather more an accompanying film score than a great composition. In this, it takes third place behind the designs and the choreography, which is a pity, when the greatest ballet scores (both commissioned and appropriated – Tchaikovsky, Stravinsky, Ravel etc.) assume an importance and relevance all of their own. It is a nice, safe sound world, which incorporates an on-stage band for the Bohemian revelries. And, even when there are moments of high drama (Leontes’s descent into paranoia, the storm at sea) it is as if Talbot does not really mean it.

And then to Wheeldon, who has done sterling work with this ‘problem play’. Because of his initial material and, to a large extent, his faithfulness to the original narrative, The Winter’s Tale emerges as uneven. It is never anything less than entertaining, but the gear-changes between the psychosis, attempted murder, death, banishment of the infant child of the first act, and the bright, cheery world of rollicking peasantry in perpetual late summer sunshine of the second are a little difficult to take. But this is ballet, and anything is possible. What these almost-diametrically opposed worlds mean is that Wheeldon has had to employ a very different dance approach for each, laying MacMillan-like expressionist angst on in generous helpings in the first and a Daphnis and Chloe-like, skipping peasant insouciance in the second. Crucially, characters are somewhat underdrawn, partly because Wheeldon has so much story to get through (but to his credit we always know what is going on). 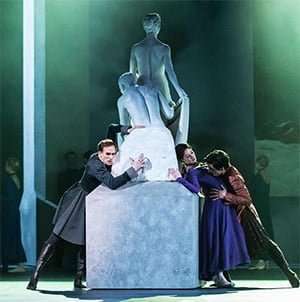 Edward Watson is called upon to twist and contort appropriately to denote his descent into suspicion and inner torment, Wheeldon employing almost every move in the ballet book to denote his mental collapse. He does this superbly, if unsubtlety. Lauren Cuthbertson, in noble, radiant form, has to convey wronged confusion with facial expression and much clenching of the fists. The Bohemian characters fare worse, with Sarah Lamb’s smiling Perdita and Steven McRae’s jack-the-lad Prince of Bohemia called upon simply to be in love. Movements in both acts can often be either fussy or generic, and I was increasingly concerned that Wheeldon, in solos and duets in particular, was constantly searching for a new way to present an old dance, so Lamb and McRae dance together in Bohemia in a pas de deux characterised by a singular lack of grace or beauty.

And then Act Three begins, and Wheeldon has suddenly found his way into this work. Central to this is the character of Paulina, Hermione’s confidante, here taken with Grecian grace by Zenaida Yanowsky. She invests this role, a model of loyalty and justice, with a gravity and solemnity, which raises the character and the ballet above the pleasingly pedestrian. Her choreography represents a fusion of the expressionistic – a movement trait is the turning and flicking of her wrists – and the graceful; her dancing with the remorseful Leontes at the Act’s opening is simple and tender, and, crucially, eloquent. Throughout, she acts as a quasi-Lilac Fairy, a source of goodness and rightness who leads the King back to his faithful and – to his great shock – living wife, her mistress.

This final pas de deux, in which Leontes and Hermione rediscover their love, is marked by a touching simplicity and a genuine beauty of movement that conveys genuine depth of emotion. It is like the Tomb Duet in Romeo and Juliet in reverse – Leontes dances with his wife restored to life. The couple are reconciled, they have found their long-lost daughter, but in a master-stroke, Crowley and Wheeldon leave the statue of their dead son Mamillius centre-stage with Yanowsky’s Paulina at its feet – Leontes’s sins cannot be entirely forgotten. It is as if the impressive imagery, costumes and sheer business of the previous acts fall away to reveal the essence of the ballet. The resolution of the story, with the ‘discovery’ of the lost daughter Perdita, the reconciliation of the two kings, and the final statue scene are effected with such economy of means and simplicity as to raise the entire ballet to a different level by its conclusion.