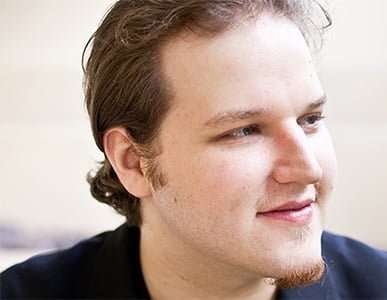 The second instalment of Bohemian Legends brought a real sense of occasion and proved that, given enthusiastic advocacy, imaginative programming can create audiences. When was the last time we heard such a roar of approval for Dvořák’s Piano Concerto or such a murmur of delight at the recurring tune in Suk’s Fantastic Scherzo? The latter may be an echo of Dvořák’s Scherzo capriccioso while adding in a taste for the macabre. Whatever its origins it was welcome indeed to hear this rarely performed work given with such polish and panache (special praise to oboist Christopher Cowie and bassoonist Robin O’Neill whose characterful playing ushered it in, as well as to the notably rich-toned cello section which covered itself in glory).

Bohemian Legends includes all three of Dvořák’s mature concertos. That for piano is the least satisfactory of them and the solo part was subjected to substantial revision not only by Dvořák but also by Vilem Kurz, the version by which many people got to know the work in a recording by Rudolf Firkušný. However, more recently, aided no doubt by Sviatoslav Richter’s recording with Carlos Kleiber conducting, Dvořák’s final version has come into its own and it was this which Lukáš Vondráček played. Part of the reason for the various versions – Dvořák’s, Kurz’s and, later, Franz Reizenstein’s – seems to have been to make it more pianistic. Jakub Hrůša was a sympathetic conductor and the heart of the piece is the moonlit slow movement with its magical horn introduction, here made subtle and memorable by Geremia Iezzi, and given a Chopinesque delicacy by Vondráček. The real turn up was the finale, feel-good music with the spirit of the dance never far absent. Richter declared that Dvořák’s final re-write is one of most difficult works in the repertoire. Vondráček made it sound easy and drew a well-deserved ovation. 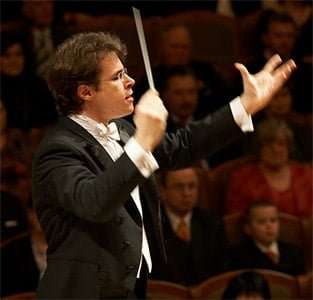 It’s curious that some of the very greatest ostensibly sacred choral works – Beethoven’s Missa solemnis, Brahms’s A German Requiem or Verdi’s Messa da Requiem – were composed by individuals who strongly denied any formal religious adherence? When Janáček’s Glagolitic Mass was first performed in Brno in 1927 the local critic wrote “Janáček, now that he is an old man, feels, with increasing urgency, that the expression of his belief in God must not be absent from his life’s work.” He received a terse postcard from the composer “I am not an old man – and I am not a believer – until I see for myself.” If there is a more life-affirming work than the Glagolitic Mass I have yet to hear it. As Janáček put it “The legend … says that Christ was hanged on the Cross, and that heaven was torn asunder. Well, I am making thunder and lightning, and nightingales, duckling and geese make music with me.”

Glagolitic Mass is another editorial minefield, begun before the first performance. Sir Charles Mackerras incorporated what was then the latest textual knowledge for his final Philharmonia Orchestra performance, only for this to be superseded by the discovery of yet further amendments which the Janáček authority Jiří Zahrádka has argued were exactly the sort of changes which Janácek routinely made during the genesis of his large-scale works. Hrůša chose to use what the programme questionably described as the “definitive” 1928 version in the 2012 Bärenreiter edition researched Zahrádka. What this performance had in spades was that essential Janáček quality of joyous conviction. The Greek Easter greeting “Christ is risen” to which the reply is “He is risen indeed” seems to sum up the Mass, so it was peculiarly fitting that this concert should have been taking place in Easter week.

This was as good a performance as one could reasonably hope to hear with just the right voices in the two significant solo-vocal parts; Gun-Brit Barkmin, a Louise Brooks lookalike, made an imposing soprano and Peter Berger’s penetrating high Slavic tenor was well able to ride the unbridled flood of sound from the assembled choral societies. Monica Groop and Mischa Schelomianski made fine contributions. Thomas Trotter has made something of a speciality of the fiendish organ solos and here the recently restored Royal Festival Hall instrument was unfurled in all its splendour.

Hrůša paced the work to perfection, paying special attention to its pauses and making light of its unusual proportions. Seldom can either the climaxes of the ‘Gloria’ or the ‘Credo’ (Vĕruju) have rung out to such devastating effect. Initially one sensed a certain tentative quality in the ladies of the assembled choirs which was certainly not the case with the men, but as the excitement built any reserve was soon dispelled. Outstanding! Beg, borrow or steal a ticket for the final concert on May 15.