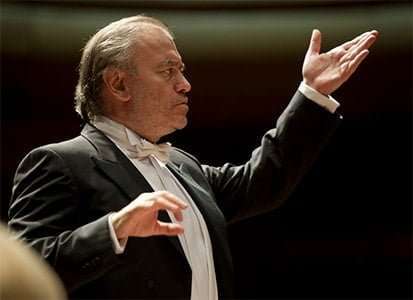 In between the second LSO Scriabin concert, three nights previously, and this one, Valery Gergiev had nipped over to New York and on Friday evening conducted Richard Strauss with the Munich Philharmonic, replacing an ailing Lorin Maazel. Back in London, it was into the world of Olivier Messiaen that we were plunged, bathed in mysterious light, and then subjected to shocking violence. From 1930, Les offrandes oubliées (The Forgotten Offerings) is the work of a young twenty-something composer, Christ’s sacrifice at the heart of this 12-minute piece, Messiaen’s inimitable style in place, with the rarefied set against the explosive. The LSO finely graded the former and ripped into the latter. In the final section, marked to be played “extremely slow, with great compassion and a great love”, the LSO’s violinists and violists were immaculately sensitive. 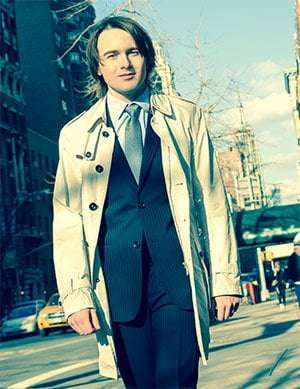 There followed Chopin’s F minor Piano Concerto, Gergiev opening it dreamily, and bit by bit cranking it up as a Grand Romantic work, to which Daniil Trifonov entered with rich life-force and glittering élan. His was a volatile and flexible account, flamboyant and tender, with much in between, dynamic in every sense, and charismatically accompanied, not least by the four woodwind principals. The slow movement was rapt and deeply soulful, and full of ardour and troubled spirits in the contrasting middle section. The dancing finale was given with a sway and an impulse, and deliciously light filigree. A ripe horn solo, itself ideally dovetailed, cued a scintillating coda, Trifonov superbly deft and enjoying every semiquaver; and it was impossible not to share his pleasure. Throughout 35 compelling minutes he coaxed many expressions and colours from the responsive Fazioli instrument. As an encore, the ‘Gavotte en Rondeau’ from J. S. Bach’s E major Violin Partita (BWV1006) – presumably in Rachmaninov’s transcription – enjoyed Trifonov’s impish clarity, enough to suggest that his record company, Deutsche Grammophon, should be looking to issue this exceptional talent in a whole disc of such arrangements.

After the interval, Gergiev and the LSO gave an impeccable account of Scriabin’s Third Symphony, ‘The Divine Poem’ (1902-4), acknowledging both its ambitious symphonic design and its mystical ability to paint pictures and transport the listener. Certainly Gergiev had its measure both rigorously and conceptually, binding its cyclical structure yet giving it a certain freedom, to which the LSO responded innately and with impressive character and ensemble. Tempos and their relationships were ideally judged, and if the overall playing time of 44 minutes was on the swift side, nothing was rushed, detail was vivid, and whether ecstatic, resolute, private or tempestuous, here were dark, earthly and fugitive enthusiasms given full vent. And that’s just the first movement (‘Luttes’, Passions), roughly half the length of this continuous work. There’s room for enchantment, too, in ‘Voluptés’ (Delights), embracing fragrances and torment, woodwind arabesques vying with harp flourishes, birdsong heard from mountaintops, yet this was also a rather solemn unfolding of this evocative music, to advantage. The finale, ‘Jeu Divin’ (Divine Play), is a summing up, motifs returning, here crisply taken on its course to a ravishing transfiguration and an emphatic homecoming.

In music easy to make rambling and seeming to sag, Gergiev’s surety of the whole and the unflagging response of the LSO ensured a true Symphony (with correspondences to Bruckner and Elgar), one with its flights of fancy and spiritual suggestiveness intact; a well-judged even-handedness on the part of the performers but with nothing diluted. I think microphones were present, so one imagines the Scriabin Symphonic Works series is due on LSO Live. Hope so!