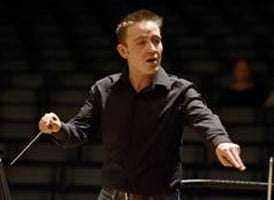 Tom Hammond is a young, highly promising English conductor who was shortlisted to appear at the International Sibelius Conducting Competition last year in Helsinki. It should come as no surprise to hear of his Sibelian sympathies but to be able to attend two concerts on the same day with him, both featuring a Sibelius symphony, does concentrate the mind somewhat.

First it was to Royal Academy of Music and Hammond making his debut as the newly-appointed conductor of the Junior Academy Symphony Orchestra. So, true to Hammond’s Sibelian form, the matinee audience sat back and enjoyed a rare appearance of The Bard and Third Symphony. This latter work used to be broadcast almost weekly on the BBC Third Programme but has fallen into (totally unjustified) neglect. The concert was graced with the presence of H. E. The Finnish Ambassador, who remarks he is hearing more Sibelius since his recent arrival to London than he does in Helsinki!Not so The Bard I venture. This cryptic, utterly characteristic work, remains in the shadows. Short, with a mesmerising theme and eloquent climax, The Bard, as with much great Sibelius, is the domain of the few rather than the many in terms of listeners. Hammond struck the right tempo and maintained the poise and reflective nature to the end.

As in the Third Symphony, The Bard is not an easy work for any orchestra. It frightens the harpist! The frequent exposed entries also frighten players, particularly young ones. But the members of the Junior Orchestra, average age about 15 I would venture, took most the challenges in their stride. Hammond again adopted sensible tempos; he will learn to trust orchestras more when deciding to slow down the overall speed in the underestimated middle movement. His instincts are correct however.

This was shown in the Second Symphony later. This work still carries the epithet of ‘pastoral’ with many people. So we expect a slow amble at the beginning luxuriating in meadows and fresh air. Hammond sprinted off the blocks and set a challenging speed. When known that Sibelius was suffering from a nervous breakdown (due to a daughter’s illness) when sketching this work, a swift tempo for the first movement makes sense. It allows an impression to be made of a coil being wound-up tightly and then released with great force. Hammond maintained his grip on proceedings. The coda became a triumph of the human spirit over adversity rather a vulgar appeal for national independence. (An interpretation always denied by the composer.) Hammond’s superb view of a glorious work was marred by raucous brass-playing that constantly missed notes. Otherwise the orchestra gave its all in supporting Hammond’s sense of impending disaster that permeates so much of this work.

Earlier, at RAM, Hammond had conducted a spirited outing for Edward Gregson’s Celebration, full of ingenious sounds for brass, percussion, harp and piano, ending almost as a tribute to the riotous side of Malcolm Arnold’s musical personality. To begin the evening-concert Hammond led Tchaikovsky’s Serenade for Strings, welcome on a chilly evening, all feel-good warmth. Then a complete change – to the astringency of Stravinsky’s Symphonies of Wind Instruments, its original version of 1920 being a tribute to Debussy, and here powerfully projected. Hammond has the knack of choosing wide-ranging repertoire in unexpected couplings that make for a thoroughly enjoyable and stimulating concert.