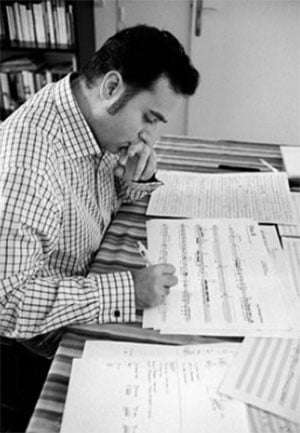 Mechanisms, and the almost dehumanising nature of the mechanical, were firmly at the heart of this imaginatively constructed programme from Variable Geometry, a reference to the highly configurable nature of the ensemble, although the phrase is elsewhere used to describe the differing speeds of nations’ integration into the European Union – a notion that seemed to resonate on several levels as the mechanically inspired music (and film) of Britain, France (and Hungary) unfolded.

Opening with the Harrison Birtwistle (Perpetual Song of Mechanical Arcady) and directly inspired by the work of artist Paul Klee, the players took a while to warm into the rhythmic elements, producing a sombre, subdued tone. This slowly evaporated with angular, jagged sections energetically contrasting with several beautifully-judged soul-searching moments, enhanced greatly by superbly fluid interplay between the upper strings, and achieving an impressive weightiness as the combined “machines” Birtwistle reveals reached juddering, epic proportions, and one could glimpse a deep terror of the unstoppable, relentless and inhuman nature of mechanisation.

Leaving for a moment what turned out to be the jewel in the programme – the Hesketh – a similar sense of the relentless helped shape the lengthy Dérive II (something like 45 minutes) by Pierre Boulez as a brilliantly-achieved momentum, interrupted occasionally by several well-manoeuvred hiatuses. As the overlaid components Boulez had generated were gradually and tantalisingly brought into focus, the music passes through fleeting moments of unity – here elegantly etched and held to the light, before being plunged back into the energetic turmoil that surrounds them, matched by Jean-Philippe Calvin producing a series of playful contrasts in tone and energy through the careful manipulation of tempo. Of particular note was some very impressive playing of tuned percussion, xylophone and marimba.

Kenneth Hesketh’s Ein Lichtspiel differs from its companion pieces played here – in a refreshingly unique, novel and hugely intelligent approach to the mechanical in music. The work is written to accompany the silent film Ein Lichtspiel, Schwarz-weiss-grau (1930) by the Hungarian László Moholy-Nagy – a film of the motions and light-effects produced by his motor-driven sculpture, Light-Space Modulator. Hesketh frames the film itself between two montage sequences he himself has constructed, placing the viewer, and listener, in the artistic and aesthetic context of the original film, thus preparing us before we are plunged into it.

Hesketh approached the film as a ballet of light in need of a score. Thus the rhythmic and structural elements of the music reflect those of the film, sometimes regular, sometimes unpredictable. The astonishing array of colours Hesketh uses is sensitively varied, leading the viewer-listener on a gently beguiling journey through the mind of the film-maker. After a mildly portentous introduction, we arrive at the film itself with an almost magical clearing of the musical mists. Navigating through a seemingly endless succession of entrancing colours, the listener passes moments of poised wonder and expectant fascination, crafted from glittering but obscured musical reflections of the machine glimpsed on the film. Throughout, the relentless sense of the mechanical is rarely obvious, but is subtly all-pervading, never dominating the cleverly constructed larger-scale structures, but firmly guiding and driving the music’s onward direction.

It is important to note that the work can be performed without the film, and would certainly stand on its own very effectively. Indeed, it often felt as if the projection simply added a further dimension to the music – music that is imbued with, and passionately conveys, Hesketh’s own fascination and sense of wonderment in the world of the mechanical.