Following the Gala Launch of the returned Royal Festival Hall organ, it was this “Celebrity Recital” (now there’s an infra dig title!) by John Scott that marked the first ‘proper’ outing for this “King of Instruments” (Wolfgang Amadeus Mozart’s description). Scott continues to have a remarkable career. He went up to St John’s College, Cambridge, as an Organ Scholar forty years ago and then became Organist and Director of Music at St Paul’s Cathedral. For the past ten years he has held the equivalent position at St Thomas Church, Fifth Avenue, in New York City. Here he was joined by his wife, who acted as his page turner, as well as an almost-packed audience.

Beforehand, the swathing of the RFH’s organ in a sickly mauve/blue light made for a very unpleasant pre-recital vision; much better was the during-concert normal Hall lighting. Nevertheless, it is the sound that is paramount, and the organ’s refurbishment has produced a magnificent-sounding instrument during a process which has taken much time, beginning with the two years of the Hall’s closure for re-building (2005-07). The main controversy with this instrument has been whether it is suitable for an auditorium like this. With a lot of the staple repertoire being composed for organs in churches, and with the RFH’s acoustic being (gratifyingly) with next-to-no reverberation, it remains questionable whether this repertoire can be given in any way as the composers expected, given that such music often relies on waves and layers of sound as well as the dying-away effect. Nevertheless, Scott chose pieces that, to an extent, negated this concern. 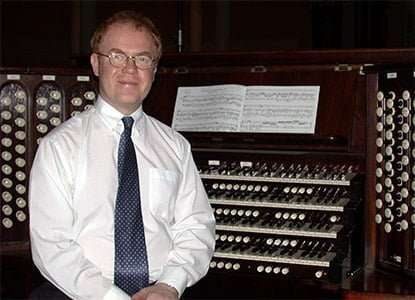 His accomplished playing showed off the organ’s character, and opening with Marchand’s Dialogue in C was ideal (the ‘dialogue’ being between different sections of the organ), its stereophonic stimulations proving illuminating. Scott achieved an exalted state, as he did with J. S. Bach’s E flat Prelude and Fugue, which had a timeless quality and conveyed universal supremacy of form, Scott doing its majesty full justice. Before the Bach, some Buxtehude (for whom JSB walked 250 miles to learn from) in which Scott conjured a sedate rustic style. Fun imbued the rendition of W. A. Mozart’s Allegro, with echoes of his father’s ‘Toy’ Symphony, whilst the two Esquisse by Marcel Dupré (28 years an assistant to Charles-Marie Widor at St Sulpice in Paris before assuming the same post until his death in 1971) had Scott sparkling and adept. Big sound!

Liszt’s Fantasia and Fugue on ‘Ad nos, ad salutarem undam’ is an awesome and huge work, and Scott gave a grand reading of it. He ruminated with the sedate sections, expanding the tempos, and the performance overall was a tour de force. The main benefit of hearing this music on this organ in this Hall was the clarity it was afforded. As an encore Scott proffered a Méditation by one of the great fin de siècle French organists, Louis Vierne, given in a transcription from a Vierne-recording made by his fellow-organist Maurice Duruflé, in which the work’s sporadic fretfulness was becalmed by Scott’s reflective execution, and the close’s low, almost imperceptible, rumble of the pedals created a spellbinding effect.