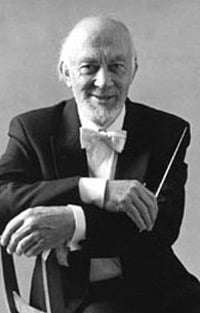 The early music of Ralph Vaughan Williams has been gradually disinterred over the past two decades (notably a cache of chamber music presented at the British Library and then recorded for Hyperion), so it came as no surprise to hear that his doctoral exercise was being given its first hearing. If the outcome is a long way from an undiscovered masterpiece, “A Cambridge Mass” at least provided a wealth of talking points for anyone interested in the protracted coming of age of one of Britain’s most significant composers.

Vaughan Williams worked on the piece intensively during 1898, delivering the score in January the following year (though he was not to receive his doctorate until 1901). The conditions imposed on his candidacy meant this was never likely to be a conventional setting of the liturgy: what resulted is a three-movement piece structured along quasi-symphonic lines – a substantial ‘Credo’ followed by a purely orchestral ‘Offertorium’, then by a ‘finale’ of ‘Sanctus’, ‘Hosanna’ and ‘Benedictus’ into a continuous sequence.

The opening ‘Credo’ is itself a substantial structure – the initial alternation of brass and chorus (which VW likely kept in mind when embarking on “A Sea Symphony” five years later) leading into an energetic paragraph at ‘Et in unum Dominum’. The expected influences of Handel and Mendelssohn are evident here, whereas the section for the four soloists at ‘Qui propter nos homines’ betrays evidence of the composer’s then-recent exposure to Verdi’s “Messa da Requiem”; the tenor anticipating the animated response of the choir at ’Et resurrexit tertia die’, before the intricate contrapuntal and resourceful harmonic writing at ‘Et in Spiritum Sanctum’ (not least the evocative modal tinge at ‘Et exspecto resurrectionem mortuorum’) and intensive – if (inevitably?) overwrought – fugal ‘Amen’.

Ostensibly an intermezzo, the ‘Offertorium’ was also obliged to adhere to sonata-form, which conceit the composer manages surprisingly ably given that such thinking was only to be mastered two decades hence. Brahms (notably the Second Symphony) is understandably the pervasive influence here, though the scoring is at least as much indebted to Mendelssohn and Schumann, while the movement overall suggests VW was more adept at invoking the Austro-German tradition than posterity has judged him to be. The finale is hardly less skilful, consisting of a measured canonic ‘Sanctus’ (galvanised by its scoring for brass, organ and timpani) and a wistful ‘Benedictus’ for the soloists – these sections marked off by a ‘Hosanna’ whose Haydnesque vigour duly rounds off the piece.

Hardly a major discovery, then, but an often-attractive work with more character (if hardly a VW persona as such) than its academic function might suggest. It helped to have the Bach Choir in such committed form, while the quartet of singers was well attuned both as soloists and as an ensemble. Alan Tongue conducted with evident belief in the music, securing a capable response from the New Queen’s Hall Orchestra as well as a viable balance between voices and instruments. Further performances are to follow in Bath and (albeit by different performers) in Northampton, Massachusetts, along with two recordings – after which “A Cambridge Mass” can reasonably take its place among those works that deserve their footnote in musical history and even an occasional revival.

Prior to the interval, Tongue directed an enjoyable if hardly revelatory account of Elgar’s Enigma Variations – a little tentative in the initial stages but gaining conviction from ‘Nimrod’ onwards and drawing no mean eloquence and mystery from the twelfth and thirteenth variations, though the finale needed more than an over-prominent organ to compensate for some fallible ensemble nor, in more lightly scored passages, was intonation all it might have been. Parry’s “Blest Pair of Sirens”, though, was a considerable success – choir and orchestra projecting Milton’s lofty sentiments with real fervency. Whether or not it launched the English Musical Renaissance, its status as Vaughan Williams’s “favourite piece of music written by an Englishman” felt more than justified.