Bach
Cantata for Easter Day, BWV4: Christ lag in Todesbanden [Hymn text by Martin Luther; sung in German]
Ullmann
The Emperor of Atlantis – opera in one act to a libretto by Peter Kien [sung in Sonja Lyndon’s English translation] 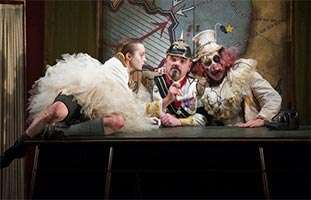 Viktor Ullmann spent the last two years of his life in Terezin, or Theresienstadt, the ghetto town/concentration camp where the Nazis encouraged among the prisoners a feverish social and cultural life to mislead the world about the fate of the Jews. In effect, it was a holding-bay for Auschwitz, where Ullmann and Peter Kien were put to death in 1944.

Terezin was also where Ullmann wrote his short opera, The Emperor of Atlantis, which, in a compelling bit of programming, English Touring Opera is performing with J. S. Bach’s cantata Christ lag in Todesbanden (Christ lay in the bonds of death) as a substantial prologue. The opera got as far as being rehearsed at Terezin, but it was never performed there, since its parody of Hitler was abundantly clear. When Emperor Overall (Kaiser Uberalles) decrees death for all, Death goes into a sulk and on strike – no one can die; people are even doing things like falling in love. Death only agrees to go back to work if the Emperor is his first victim. Normal service is resumed. 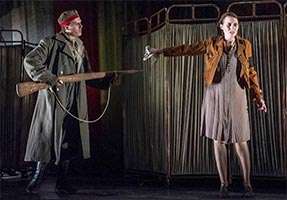 James Conway’s production has a village-hall improvisatory quality that you feel could have mirrored what was available at Terezin, with Neil Irish’s exaggerated costumes – corpulent Emperor in white uniform and spiked Prussian helmet, Life as a clown – striking a defiant Dada pose, like a very down-at-heel Kit Kat club from Cabaret. With the Kurt Weill-like music – played by an eccentric ensemble made on the musicians at Terezin, including harmonium, harpsichord, saxophone and banjo, incisively conducted by Peter Selwyn – flirting with operetta and high romanticism, the effect was, not surprisingly, thumping in its irony. Appalling reality peered through, though, with the use of familiar German tunes, such as a ‘wrong-note’ version of “Deutschland, Deutschland, uber alles” and the closing chorale setting words that start “Come, Death, our worthy guest” to the supremely confident tune of “Ein’ feste Burg”. The production and design made it clear that Ullmann and his librettist Peter Kien had nothing to lose.

The singers were completely in the music’s stridently absurdist groove. Robert Winslade Anderson’s excellent Death (presented as a tired old soldier) dominated the ensemble, with some powerful solos from Katie Bray as the Drummer (an intermediary between the Emperor and Death) and Jeffrey Stewart’s hysteria-prone Harlequin. The words came across well, making the précis of the text on screens either side of the Linbury stage useful but not strictly necessary.

The Bach curtain-raiser could have been unbearably mawkish, but it linked-in with the opera powerfully. A group of Jews arrives at Terezin and perform the Easter cantata to the cast of the opera, its message of life triumphing over death, Bach’s incredibly dramatic music gathering in definition through the seven verses of Martin Luther’s hymn – and, in the process, raising once again all those unanswerable questions about the War. It cast a long, sad shadow over the rest of the evening. The singing of the four-strong SATB group was frail and astringent, complementing the imaginative instrumental re-scoring, the tremulous “Hallelujahs” at the end of each verse hardly daring to believe in the possibility of resurrection. The four singers in the Bach also sang the concluding chorale in the Ullmann, a tying-up of loose ends that was unforgettably distressing. A triumph for ETO.