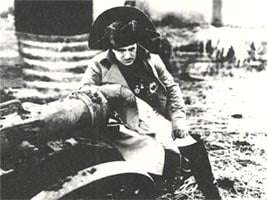 “Waterloo” was Germany’s answer to Abel Gance’s extraordinary epic film “Napoleon” (1926). The subject was the same, but the scale more limited: Gance’s film, as masterfully restored by Kevin Brownlow, runs for 330 minutes, against 134 minutes for Karl Grune’s treatment. These days, Grune’s name tends to be linked with his 1926 film “Die Strasse” (The Street), a tale of the common man trying to cope with manifold pressures from the outside world. But in the late 1920s Grune tackled historical subjects: “Königin Luise” (1927-28), “Marquis d’Eon, der Spion der Pompadour” (1928), and “Waterloo” (1929).

“Waterloo” was much anticipated, since there was a huge vogue for such films at this time. In Gance’s film, the magnificent Albert Dieudonné played Napoleon, but William Humphrey took the role in no less than nine films between 1909 and 1927, as did Charles Vanel in three more, including Grune’s. 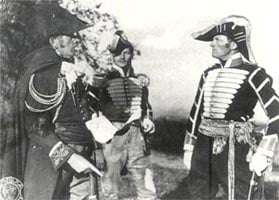 While the German film is highly accomplished, and often really entertaining, it would be idle to suggest that it is anywhere near as inspired as Gance’s, which in terms of scale, imagination, and novel techniques – such as cross-cutting and mobile camera work – is in a different league. On one or two occasions Grune does use split images for contrastive effect (for example, the ball scene juxtaposed with an image of Napoleon’s troops on the march, or the aerial shot of advancing cavalry), but these hardly compare with the products of Gance’s more fertile imagination. That said, there are many memorable details, such as the chiaroscuro in the scene at William III’s palace, or the rays of light falling like a benediction upon Prussian troops advancing through the forest before the final battle, or the camera’s rapid descent from high above the battlefield towards soldiers engaged in hand-to-hand combat. However, there is little sense of realism in the battle scenes – all very stylised, to put it kindly!

Whereas Dieudonné is totally charismatic as Gance’s protagonist, Grune’s Napoleon, Charles Vanel, yields – in terms of dramatic force – to Otto Gebühr’s Blücher, commander of the Prussian forces. Grune seems not to have had any sort of nationalistic agenda in making “Waterloo” – notwithstanding some contemporary critics imputing otherwise – but having the Prussian forces under the command of a man so human and so sympathetic as portrayed by Gebühr certainly draws our sympathies towards the Prussian cause. At the outset, the retired soldier is shown as a devoted husband with a twinkle in his eye, relishing the memory of his amorous early self. Recalled to duty after Napoleon returns to France, Blücher continually evinces humanity and warmth, not only through a rich collection of facial gestures – geniality to the fore – but also through a patent sympathy for his troops. But he is equally impressive when exploding with fury at the suspected treason of the dashing officer Reutlingen (Oskar Marion), who has succumbed to the seductive wiles of Napoleon’s spy, Countess Tarnowska. 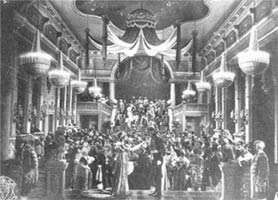 On the musical front, the Philharmonia Orchestra played superbly for Carl Davis; his fusion of specially composed music with arrangements of a variety of period pieces deftly reflected every change of mood in the film. His arrangements and elaborations of music by Beethoven (the ‘Funeral March’ piano sonata and – ubiquitously – the Seventh Symphony), Weber (Invitation to the Dance for the ball scene), Mozart, and others, were perfectly judged. Amidst much outstanding playing, one cannot easily forget Christopher Cowie’s lovely oboe playing in the moving scene where Marshal Ney yields to Napoleon; and when Blucher rumbles Tarnowska – her suicide soon to follow – the accompaniment for two violas, cello, bassoon, timpani and brass was beautifully played, and packed with suspense.

Whatever its weaknesses – the film plays fast and loose with history – Grune’s “Waterloo” is most enjoyable, with many humorous moments to lighten the drama, and it deserves to be more widely seen, especially when done as well as this.