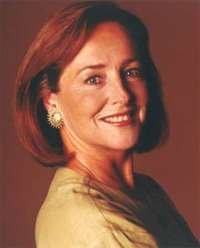 When Frederica von Stade came onto the Carnegie Hall stage for her New York farewell recital, the house filled with a thunderous, vociferous ovation, the sort usually reserved for the end of an outstanding concert. Dressed in a hoop-skirted gown with striking black and white stripes, her long-time accompanist Martin Katz by her side, she seemed moved by this warm and extended reception.

Her program appeared to be an eclectic collection of some of her favorite pieces; however, as she guided the audience through it with witty comments, it turned out that it was a musical representation of stations of her life. Calling herself the “runt” of the family, a small baby with “a rosebud mouth”, she launched into Ned Rorem’s “I Am Rose”, and Guglielmi’s “La Vie en rose” (usually associated with Edith Piaf), followed by allusions to the family’s stay in Greece with a song from Jake Heggie’s “Paper Wings” cycle – composed to von Stade’s texts – and Ravel’s ‘Tout gai!’. Although her voice naturally has lost a little of its luster (von Stade was born in 1945), she had chosen the program well to highlight her strengths – characterization and artistry. In addition, her middle and low register have grown richer and darker.

Recalling her convent-school years in Washington DC, she gave us Virgil Thomson’s “A Prayer to Saint Catherine”, and Aaron Copland’s “Why Do They Shut Me Out Of Heaven?”. Lee Hoiby came to the piano for his “The Serpent”, a tongue-in-cheek tribute to her love of singing. Launching into a set in honor of her stay in Paris with songs by Poulenc, Rorem again (acknowledged in the audience), and Marc Berthomieu, she displayed her special affinity for French repertoire. To close the first part of the program, Richard Stilwell and Samuel Ramey joined her in a nostalgic ‘Some Other Time’ from Leonard Bernstein’s “On the Town”, slightly altered with musical allusions to “Le nozze di Figaro” and Debussy’s “Pelléas et Mélisande”, which she had performed with these colleagues.

The singer’s sense of humor was obvious in her choice of remembering her audition at the Mannes School of Music with the Mahler, in which an ass sits in judgment of a musical contest between a nightingale and a cuckoo; her first professional engagements were represented by an excerpt from Ambroise Thomas‘s “Mignon”.

Honoring the birth of her two daughters with Peter Elkus, she gave touching performances – first “Jenny Rebecca” by Carol Hall (also in attendance) and the second piece by Heggie, in which her dramatic talent came to the fore as well. A very pregnant Jenny Rebecca (von Stade’s daughter named after Hall’s song, itself made famous by Barbra Streisand) later joined von Stade in a duet for an encore, Chris Brubeck’s “Across Your Dreams”, a song for daughters.

After reprising some of the “good and bad girls” she had portrayed with settings by Thomas, Ravel and William Bolcom, the program proper ended with Pauline Viardot’s “Die Sterne” and Stephen Sondheim’s ‘Send in the Clowns’, both with contributions by her cellist-friend Emil Miland. Martin Katz, who has been performing with von Stade for over three decades, was an outstanding collaborative artist throughout, equally at home in art-songs, operatic excerpts, and lighter fare, prompting a comment about “Marty’s Piano Lounge”.

The extremely enthusiastic and appreciative audience naturally would not let her go without encores, starting with Jerome Kern’s “I’ve Told Every Little Star”, then the duet with her daughter, after which Katz played the introduction to von Stade’s signature tune ‘Voi che sapete’ from “Le nozze di Figaro” and the audience erupted into wild applause. Her voice may not have quite the power it once had, but it is still beautiful and projects easily.

This would have been a fitting, slightly nostalgic ending to her farewell recital, but ‘Flicka’ had other ideas. She then gave us a delightful characterization of a lady who had had a few too many with Offenbach’s ‘Ah quel diner’ from “La Périchole”. Her comedic timing and body language were exquisite, sending us into the night not with a tear but a smile.