Frank Denyer
Unison 1
A Book of Emblems and Songs – Quick, Quick the Tamberan is Coming; The Hanged Fiddler
After the Rain
Two Voices with Axe
Screens [world premiere] 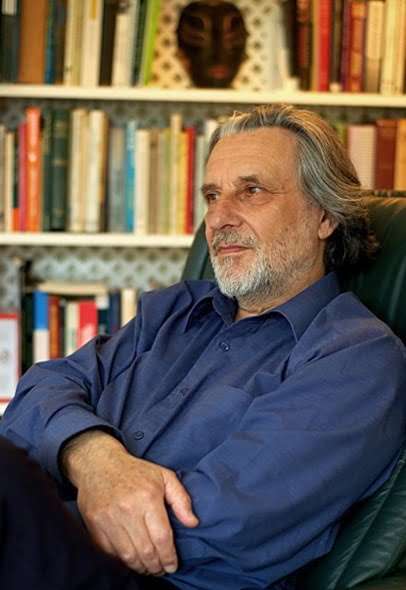 Housed in the quondam cinema, the Coronet in Notting Hill, I knew The Print Room as the adopted home of its eponymous vibrant experimental theatre company, but it was new to me as a concert venue. Perhaps appropriately, then, both ensemble and composer at this concert were also new to me – and indeed all three are new to Classical Source reviews – so it’s a pleasure to extend a warm and appreciative welcome to them all.

Introduced by Octandre’s co-artistic director, Christian Mason, who interviewed Frank Denyer (born 1943) at the start of the concert and special guest, trombonist and fellow-composer James Fulkerson at the beginning of the second half, the concert was devoted to Denyer’s finely calibrated chamber works that revel in the exquisite combination of timbres. As we found out (from Fulkerson, as it happens), Denyer is a fine pianist who doesn’t write for the piano, and the only common instrument (save for one piece) at this concert was the flute or similar instrument.

Denyer furrowed his own path from his college days retaining a primary interest in the melodic line, and also a zeal for breaking down the barriers that have blinkered western musical traditions into such a narrow rut. In essence Denyer is a magpie for anything interesting in other musical traditions across the globe, and has a penchant for using found objects as instruments.

The first sounds we heard were off stage, behind the audience; a single line played, as its title suggests, in Unison 1, shared between female voice, two flutes, violin and viola, suffusing the darkened auditorium with an atmospheric aural glow. We had been encouraged only to applaud after the third piece, so we waited silently for the four bass flautists to take the stage for the first of two excerpts from Denyer’s A Book of Emblems and Songs (as old as Unison 1, dating from 1972-3). ‘Quick, quick the Tamberan is coming’ (a title taken from Margaret Mead’s anthropology writings) essays another seamless melody, mostly hushed, and somewhat otherworldly as emitted from the four guttural bass of the flute family. Another darkened but skilfully managed stage change led silently into ‘The Hanged Fiddler’, taking the folk-tale of the musician highwayman who, when caught, tired and sentenced to death, plays one last tune on his fiddle at the gallows before smashing his instrument into the coffin that will soon bear his own body. Here (sans flute) – the violin takes the lion’s share, over a viola’s sustained notes and subtle percussion.

Flautists – though no flutes – were back in force with three ocarinas for After the Rain, and a pair of shakuhachi, in the mellifluous hands of Richard Stagg. Inspired by a “modest” shower bringing a Kenyan semi-desert to burgeoning life, Denyer’s distinct instrumental lines seemed to me to characterise birdsong, with the shakuhachi taking the part of an upside-down cuckoo. This is bewitching music; organic and natural rather than manicured and regimented, weaving a mesmeric spell, before a culminating collective glissando-like sigh. 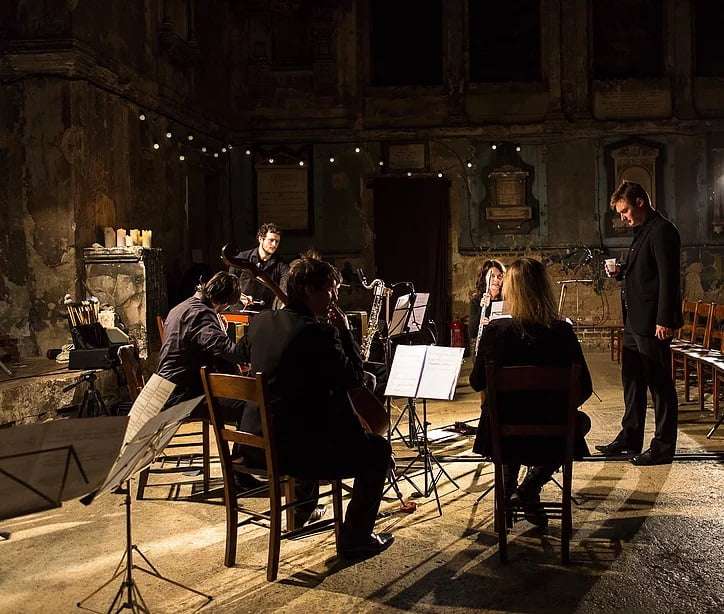 The interval (not without its own fascination with an enclosure being prepared for wood cutting) sped over nearly thirty years of Denyer’s compositional career so that the second half – following Fulkerson’s insight to working with Denyer – was devoted to works from the current decade which both highlighted a theatrical element in Denyer’s creativity. Two Voices with Axe is descriptive in itself – though the two voices (male and female: Denyer and Juliet Fraser respectively) are surrounded by flute, three strings and percussion on one side, while the wood store with percussionist Calum Huggan is on the other side towards the back; a transparent guard in place to catch any splinters. As with After the Rain Jon Hargreaves conducted. Denyer speaks of three specific timbres – the disruptive suddenness of the axe on wood; the quiet percussion and the voices, supported by the flute and strings – but to my ears it seemed like a study in glissando – the male voice sliding up, the female down (and a liminal passing place, where it’s difficult to determine who’s singing) – punctuated asymmetrically by the axe fall. A score for the end-titles of The Cherry Orchard perhaps?

Finally, to the world premiere, named after the four silent elements to the visualisation of the work: Screens. Here the two percussionists, centre-stage with their backs to the audience, focus the other performers who sometimes play from behind the screens and sometimes step into the open. In addition to the female voice, flute, violin and viola, Denyer also was behind a screen, appearing late-on to issue repeated words about words being sounds, before heading back into the shadows. Again there was abrupt, abrasive, repetitive percussive punctuation in the form of what looked like a giant pencil which Huggan smote down on a wooden bass. While I was intrigued by Denyer’s continued fascination with timbres I was less convinced by the theatrical element, especially as there was no aural difference between players being hidden behind the screens or visible to the audience.

At times the music of Takemitsu came to mind; at others, Ligeti. Additionally, Denyer’s work with Morton Feldman and connections with America, east Africa and India (all places he has lived), also seep quietly through his music. All credit to The Octandre Ensemble for its meet-the-composer strand at The Print Room, which continues in September (date tbc) with Rolf Hind, while a Frank Denyer CD will be available next year from Another Timbre.