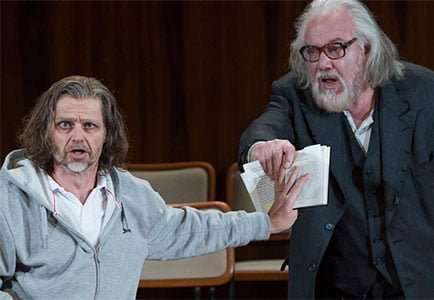 I’ve heard of smooching in the back row of a cinema – indeed some of them retain double seats for closer comfort – but I hadn’t expected things to get quite so out of hand as in Jossi Wieler and Sergio Morabito’s production of Schoenberg’s Moses und Aron which Welsh National Opera has mounted not only at home in Cardiff and regular tour venue, the Birmingham Hippodrome, but also London’s Royal Opera on July 25 and 26.

It was at the Royal Opera nearly 50 years ago that the work received its only other British staging, directed by Peter Hall and marshalled by Sir Georg Solti and sung in English (so important was it held to be that a repeat was mounted at the Proms that same year, 1965). Since then there has only been four opportunities in Britain to hear the work live – Pierre Boulez and the BBC Symphony Orchestra mounted a concert performance in 1973 in tandem with his first recording of the work, and repeated at the 1975 Proms. The BBCSO, this time under Sir John Pritchard, contributed a performance to the Schoenberg: The Reluctant Revolutionary series the Southbank Centre mounted in 1988 (5 October, the day before Karajan’s final visit to London). Only once in the intervening quarter-of-a-century have we had a chance to hear this extraordinary work, when Christoph von Dohnányi conducted the Philharmonia Orchestra in October 1996.

All credit then to Welsh National Opera, its CEO and artistic director David Pountney in one of his intelligently designed themed seasons, and, particularly, music director Lothar Koenigs, for making such successful amends. We may not have had to wait the proverbial 40 years that the Israelis were in the desert since last hearing it, but it was beginning to feel like that. 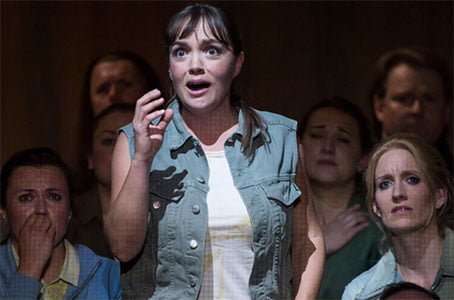 Pountney is no stranger to the European opera scene and so turned to a production first mounted in Stuttgart in 2003 by Wieler and Morabito (a revival of which was audio-recorded and released by Naxos). Gone are any allusions to the Biblical setting – a review of the original Stuttgart production mentions an Egyptian flag on the lectern in the first Act but, even if retained for WNO, I wasn’t aware of that subtlety. Instead we are in an airless conference hall, ubiquitous across institutions worldwide.

Given the nature of Schoenberg’s conception – Moses und Aron is a debate between the truth of the message and how it is presented – a debating chamber is entirely apt. Perhaps, post-Arab Spring (six years in the future when this production was new), it could be set in a Cairo park, cluttered with tents during an occupation, but I found the rather arid atmosphere of a modern parliament-like building fit for purpose.

Moses enters in an ill-fitting, dishevelled suit puzzled in the face of the burning bush and his instructions from an otherworldly god he doesn’t see (six solo voices singing from the pit). While he understands the kernel of God’s message, he hasn’t the words to disseminate it further. God has already chosen Moses’s brother Aaron to help, and it is Aaron who translates for Moses. Aaron (the reason why Schoenberg spelt him ‘Aron’ in the title was that if he used the second ‘a’ the title would be 13 letters which – superstitiously – he could not accept) is in cargo pants and a hoodie, much closer to the casual dress of the chorus that creeps into the debating chamber. The message is difficult and they only begin to comprehend when Aaron provides magic (here confined to staring into the Bible – so no staff to snake or infecting Moses’s hand with leprosy then healing it). Only then do they start to have faith. 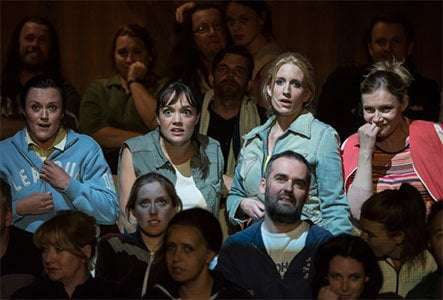 Over the interval the Israelites escape Egypt via the parting of the Red Sea, and we rejoin them in the desert. The lecterns and tables have been removed and we’re faced by serried ranks of seats. Moses has been absent for 40 days – up in the mountains collecting the Ten Commandments – and Aaron has unrest to deal with. He’s overheard talking to himself: perhaps God has killed Moses? The crowd get even more restless so, spin doctor that he is, he decides the lesser of two evils is to give them an image, not a Golden Calf here but a screening of who knows what? That’s left to our imagination, but the analogy works well. Marx may have said that “religion is the opium of the people”, but it’s equally true of consumerism or, indeed, capitalism: give them what they want to keep them quiet, even if it leads to an orgy of sex and violence (mostly kept behind the chairs here). Schoenberg’s music becomes more insistently rhythmic (although never what you would call unbuttoned), the intricacies of it all being generated from just one twelve-note row and its inversion never intruding on its force. Tightly controlled, it has the rhythmic drive of Bartók, rather than the unexpected spontaneity of Stravinsky, and its curtailment when Moses banishes the image and rails against his brother is all the more powerful in the anguished silence with which the opera ends.

Or rather doesn’t end, in that Schoenberg had planned a third act, albeit rehearsing the same argument between the two brothers, though with Aaron in captivity. The soldiers ask if they should kill him, Moses says “no”, just release him and see how he fares. Aaron, now free, drops down dead. With no music, Schoenberg’s text is sometimes recited at the end, although not necessary. Although Zoltán Kocsis has completed what would have been the final Act, WNO leaves the two to stand alone.

This is powerful stuff, clearly and grippingly realised. Joining the two named roles – John Tomlinson, magisterial in his sprechtstimme, and Rainer Trost, ravishing in Aaron’s lyrical lines – is the chorus, perhaps the most important single component and quite superb in its preparation, commitment and security, a palpable force that drives the drama on. The various solo roles, small but important, are similarly expertly realised. Schoenberg’s extraordinary conception of layering speech-song and sung lines creates an aural palate that is quite unlike any other opera, and it’s hard to imagine it being better achieved than here.

Leading it all is Lothar Koenigs. I was struck how similar to Solti he could look at times, particularly with his left-hand extended and piercing eyes, blazing with the commitment that his players and cast bring to the work. WNO’s restoration of this seminal and often beautiful work is a triumph that will live long in the memory.