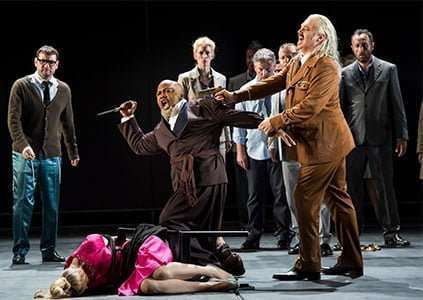 This was a thrilling evening in the theatre from a musical perspective: the Chorus, soloists and Orchestra of Welsh National Opera taking Verdi’s early barnstormer of an opera as the rough-and-ready piece it is, and giving it their very all. Much of the success can be attributed to the elemental and precise conducting of Xian Zhang. After leading a spirited account of the Sinfonia, with all the contrasting themes most delicately touched in at times, she launched the Orchestra straight into the rough-and-tumble of Part One with scarcely a moment’s pause – certainly not enough for anyone in the audience to applaud! From then the momentum was kept up, and even the famous show-stopper moments such as the Chorus of the Hebrew Slaves in Part Four and ‘Sappressan gl’istante d’un ira fatale’ of Part Two were in no danger of being allowed to interrupt the propulsive reading. The Orchestra was in fine fettle too – warm strings, mettlesome brass, and lithe woodwind all making their mark, and demonstrating that the young Verdi was already composing with a distinctive voice in his “years in the galley”.The Chorus was also on thrilling form – in this opera it is really one of the protagonists – relishing the big moments as well as the periods of relative calm. However, WNO had its trump cards by having a cast that it would be hard to imagine bettered. Towering above them all was Mary Elizabeth Williams’s stupendous Abigaille. This is a notorious voice-wrecker of a part; one that requires a huge range, a dramatic edge, a coloratura flexibility and an ability to sing lyrically and quietly. Oh, and a Nabucco without an Abigaille who can hold the stage is not worth seeing, either. Williams simply has it all – she was in total command of stage and voice. She has expressive eyes, and also displayed a knowing sense of humour. Indeed, it is hard to recall a performance of the role where the singing was so consistently beautiful, even in the most aggressively dramatic passages. 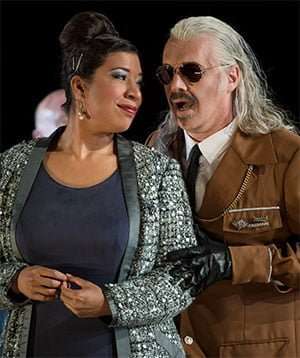 She was ably partnered by the rich, sappy and trenchant singing of Kevin Short as Zaccaria, and the mellifluous tenor of Robyn Lyn Evans as Ismaele. Justina Gringyte was a more than usually strong presence as Fenena, her distinctive velvety yet penetrating tone quality providing a wonderful contrast to Williams’s instrument. In the title-role David Kempster took a little while to get into his vocal stride but by the time of his Part Three scena with Abigaille he was on top form. In the more introspective moments such as ‘Dio di Guida’ his sense of line and firm singing paid dividends. Mention should also be made of Rosie Hay’s Anna who made much of her big moment as she soared over the chorus.Reservations? Well a few, and mainly relating to the staging. Ben Baur’s designs were rather relentlessly glitzy for the Babylonian scenes although they contrasted well with the gloomier settings for the Hebraic locations. There were some miscalculations that made it harder for some of the singers to make an impact – most notably Nabucco’s first appearance where he appeared on a platform at the back of the stage behind a table. With all that going on in front of the table and on the front stage apron it was hard for Kempster to make the necessary authoritative impact on his first appearance. Also there were moments, the highly choreographed prancing of Abigaille’s military retinue, which threatened to take the production too far down the line of a broadway musical. A little less would have meant so much more – especially since Williams clearly needed no help in making her presence felt! Nonetheless, the musical impact was so overwhelming I think everyone would have left the theatre more than satisfied.