La Senna festeggiante (The Seine rejoicing) is one of three surviving serenatas by Vivaldi, a type of work lying between a cantata and opera in scale. Composed around 1726, this allegorical drama effectively constitutes a piece of eighteenth-century agitprop, glorifying Louis XV of France, as it was probably composed for the name-day of that monarch, celebrated at the French Embassy in Venice. The figures of the Age of Gold and Virtue are led by the River Seine to pay homage to the King, and they proclaim that on the shore of those waters they “will always enjoy in the fairest dwelling sweet air and happy days.” 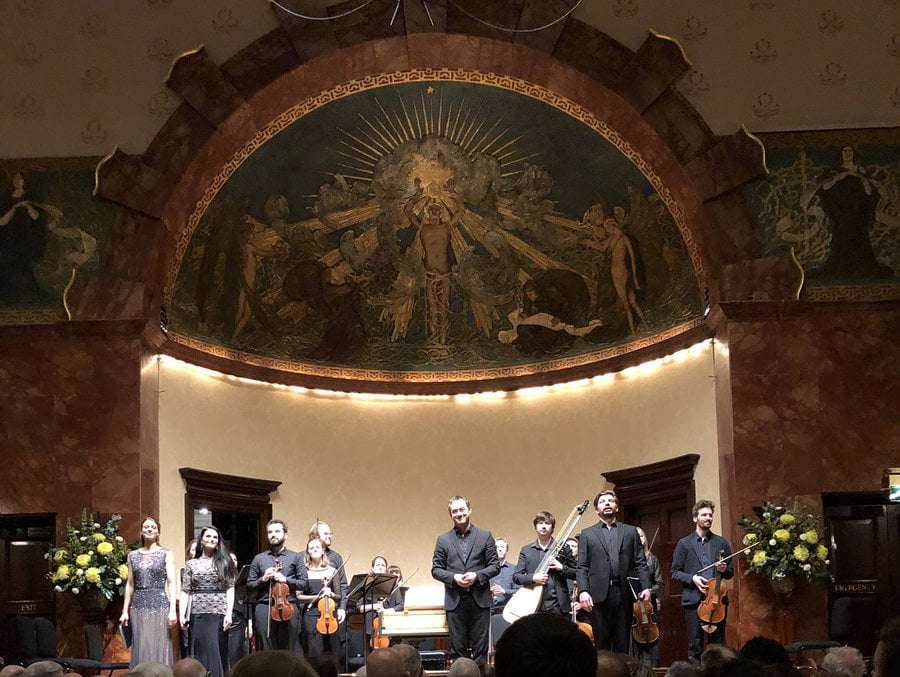 It gave Vivaldi an opportunity to fuse French musical elements with his customary Italianate, operatic style, by using a characteristic Overture (dotted rhythms followed by a fugal passage) to open the second Part, arias in the form of a Sarabande or Minuet, and a Chaconne as the concluding chorus. The result is an attractive and varied work that deserves to be far better-known with its combination of such forms with duets and accompanied recitatives, therefore comprising a veritable aural feast. Certainly on its own terms the music requires no explanation or apology, unlike the unashamed flattery of the French monarch in praises such as “there has never been seen piety more majestic upon a throne, nor more noble majesty.” Who would be able to keep a straight face if called upon to eulogise any leader today in similar fashion?

Arcangelo, with director Jonathan Cohen, gave a sincere performance of this all-too-rarely heard work, fortunately spared the embarrassment of having to take anything other than the musical dimension seriously. Part One established an aura of gravitas and expectation with its relatively foursquare, even unremitting, approach that tended to sustain a constant dynamic and pace through the succession of numbers, precluding a certain degree of contrast and charm. Part Two was more varied in delivery, providing greater zest and vigour, as the figures enter the King’s presence.

Emőke Baráth and Anna Reinhold emphasised the essential dignity of the composition, Reinhold sounding stern on her first appearance as Virtue, but still supple in the ethereal aria ‘Così sol nell’aurora’, whilst Baráth depicted the Age of Gold with a touch more levity and grace, rubbing off on Reinhold for their coquettish duet ‘Godrem fra noi la pace’. Callum Thorpe embodied the Seine with lithe, lyrical authority, although some dryness of tone in Part Two led to a couple of cracks in his otherwise stable articulation.

If this rendition stressed French refinement and order rather than Italianate drama and display, it still realised the score’s inventiveness eloquently, and Cohen understandably could not resist repeating the ravishing and infectiously exuberant Chaconne. For those only familiar with Vivaldi as a composer of instrumental music, this was an enticing way into his equally accomplished and sizeable output of vocal compositions that might encourage more ensembles and audiences to start probing the operas more actively.