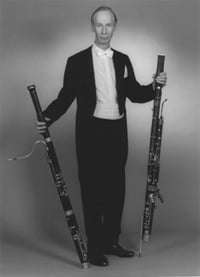 Mounted in celebration of the life and work of bassoonist extraordinaire, William Waterhouse, in what would have been his 80th-birthday year, bassoonists from across the world arrived for this delightful and well-planned matinee concert at Wigmore Hall, introduced by Waterhouse’s widow, Elizabeth, and involving his three children, violinists Lucy (also a violist) and Celia and cellist and composer Graham. The grandchildren got a look-in at the very end with the presentation to all thirty instrumentalists of a red rose each, although the Wigmore Hall platform could hardly accommodate them all.

The stage had looked scarcely less heaving at the start, with Waterhouse’s arrangement for two bassoon choirs of Giovanni Gabrieli. Even Jonathan Jones stood to play his contra (secured with a double harness over both shoulders under his jacket), in a surprisingly effective and atmospheric rendition that, notwithstanding the confines of the space, provided a nice balance between the two groups. The remainder of the programme featured smaller ensembles, but expertly illustrated Waterhouse’s range of interests. Julie Price, Waterhouse’s current successor as principal bassoonist of the BBC Symphony Orchestra, played the genial opening and closing movements of Gordon Jacob’s Suite, written for Waterhouse by the man who had taught him harmony, and Australian bassoonist Lyndon Watts had lots of fun in Jean Françaix’s Divertissement, composed when Waterhouse was only eleven, not yet having taken up the bassoon, but dedicated to him after Waterhouse had rediscovered the work in 1966 after it was thought lost, recording it with the Melos Ensemble.

Earlier Watts had played the opening movement of Bohemian expatriate Anton Reicha’s Grand Quintetto on an 1807 instrument from Waterhouse’s collection, representing his interest in old instruments and his work on the catalogue of the Royal Northern College of Music’s Henry Watson Collection of Historic Musical Instruments, which he begun in 1994 but which was only published in hard copy last year, two-and-a-half years after Waterhouse’s death. His encyclopaedic knowledge of all things bassoon – resulting not only in the Yehudi Menuhin guide, “The Bassoon” (Kahn & Averill, 2003), but also the 12,000-word entry in the latest Grove – would have culminated in a book to be published next year, now taken on by James Kopp, for Yale University Press. Kopp was one of the bassoonists in the Gabrieli.

But perhaps most poignantly was the involvement of Waterhouse’s three children. Graham as composer contributed the musical evocation of a trip up the Bright Angel trail (Grand Canyon) undertaken with his father back in 1972, aged 9. With its overriding arch between the deep, grumbling opening and ending (rather like Richard Strauss’s An Alpine Symphony), three bassoons and a contra (the RNCM Bassoon Ensemble) essay various moods of the route in an engagingly atmospheric piece that ended the first half. The penultimate work, after Stefano Canuti had stylishly and brilliantly essayed Tamplini’s Fantasia di Bravura, was the only piece without bassoon – Graham Waterhouse’s Epitaphium for string trio, written in his father’s memory, was beautifully and memorably performed by the composer and his sisters, Lucy taking the viola part.

There were two other works. Vivaldi’s flute and bassoon concerto was given by Seiya Ueno and Takashi Yamakami as the centrepiece in the first half, while the finale of Schubert’s Octet brought the concert to a close, thereby celebrating Waterhouse’s many years with the Melos Ensemble in one of the group’s signature works. The Melos’s clarinettist – Gervase de Peyer (now 85) – joined the other instrumentalists for a loving performance (some intonation infelicities aside) that seemed to encapsulate the very essence of William Waterhouse.

So, not only a hugely enjoyable concert, but also a very fitting tribute to an influential musician, composer, writer and historian with, notably, a free programme packed full of tributes to Waterhouse. The concert was co-presented with Park Lane Group, following a long line of distinguished tribute concerts.