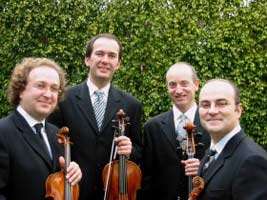 Especially welcome was the chance to hear the rarely performed String Quartet by (Belgian) César Franck, which has suffered relative – and undeserved – neglect by comparison with its successors from Debussy and Ravel. Written in the last year of his life (1889-90), Franck’s example first gained full recognition when – appropriately enough given the current performers – it was performed at the Salle Pleyel in 1890 by a quartet led by Eugène Ysaÿe (he was also the first interpreter of Franck’s Violin Sonata).

Uneven and occasionally overlong for its material (it lasts around 50 minutes), Franck’s String Quartet nonetheless contains some wonderfully memorable music – particularly the expansive opening gesture which caused Franck endless trouble, the sotto voce ‘Gnomenreigen’-like scherzo, which is the soul of wit and brevity, and the huge Larghetto, at once sweet and elevated like an extended contemplation of the Elysian fields.

The Ysaÿe Quartet was in its element throughout, poised and elegant, finding a certain fluidité at the work’s opening and, yet, without any sense of holding back, avoiding the tendency to over-egg the pudding as the movement progressed. The playful scherzo, taken very quickly, was full of flickering half-lights and the Larghetto was notable in its poise and douceur, its two brief climaxes expanding to an almost orchestral amplitude, the musicians intuitively grasping a difficult tempo marking and achieving such a natural flow. Only in the finale – ushered-in by echoes of the previous movements but here sounding rather contrived – did one feel the material seriously outstaying its welcome.

The performance of Beethoven’s Opus 130 failed to reach a similar level of inspiration. Few groups can play this music with the technical assurance that the Ysaÿe bring to it and, as well as its accustomed sovereign command, the concluding Grosse Fuge was despatched with at least some of the grittiness which had previously been so lacking. However, moderation is not a virtue in this music, surely some of the most immoderate ever written, and the five movements of Opus 130 that lead to the Fugue (the original finale) suffered a degree of blandness as though the musicians could not trust themselves to push matters to the extremes.

This blandness manifested itself in various ways. In the opening movement’s Allegro sections Beethoven marks much of the quicker music non ligato (sic) and relies on violent juxtapositions to make the point; here the Ysaÿe musicians might have been playing one of the Opus 18 quartets. In both the poco scherzando third movement and the alla danza tedesca fourth there was little sense of either of these movement’s abrupt motion and eccentrically uneven character. The biggest disappointment was the ‘Cavatina’, some the most heart-rending music ever written, which although beautifully voiced, went for little, clinically observed from outside rather than fully experienced from within.