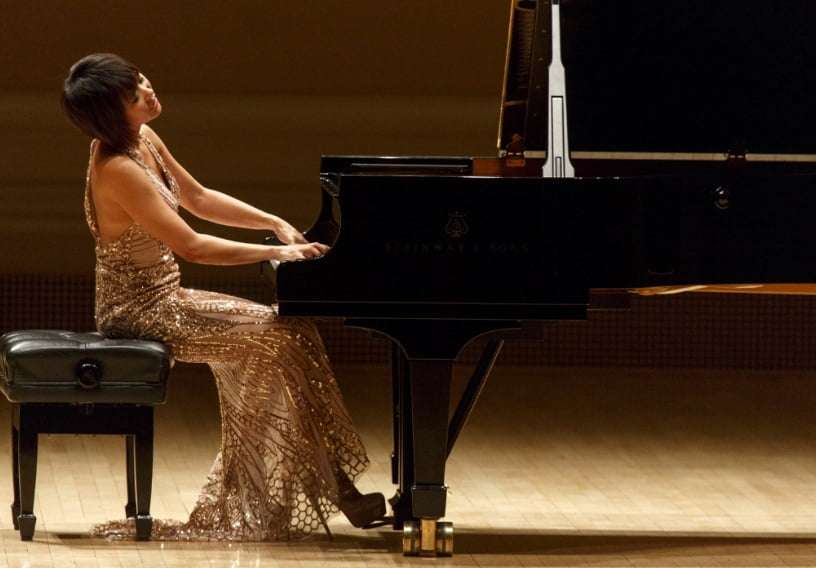 Few young pianists revel in their technical prowess or indulge in excesses of emotional outpouring with as much ardor and energy as Yuja Wang. In only a few years, she has garnered an international reputation for her sensational talents. Wang returned to Carnegie Hall and included the monumental ‘Hammerklavier’ Sonata, one of the most challenging works in the repertory.

Wang opened the recital with the first two of Brahms’s Ballades. It would have been preferable to play all four, since they are profoundly connected by a common inspiration. In the D-minor Ballade Wang combined a meditative approach to the opening section tinged with a slightly bittersweet character, caressing the notes gently and with a languid fluidity that was captivating. By contrast – a key word in describing her general manner – Wang drove forcefully into the more impassioned middle section, as if asserting that she possesses as much power as she does delicacy and tenderness. So too with the D-major example, in which she combined a feather-light touch with exquisitely phrased and shaped lines which made the opening section sound like a haunting reverie. Her highly demonstrative treatment of the central section was reinforced with emphatic accents and riveting thrusts.

Such combinations are well-suited to Schumann’s Kreisleriana, depicting the manic-depressive nature of conductor Johannes Kreisler, one of E. T. A. Hoffmann’s most fascinating characters. Wang’s playing emphasized, if not reinforced, the multiple aspects of Kreisler’s personality, from frantic schizophrenia to gentle reflection, the former played with tantalizing, frenetic abandon. She urged already fast tempos still further; it was as if she could not play rapid passages fast enough. Dreamy, wildly ferocious and flittingly nimble by turns, Wang spun out this string of mood-pictures with consummate skill and deeply sensitive expression: a reading of extremes that could seem excessive.

It was no surprise, then, as to how Wang approached the ‘Hammerklavier’. Rapid tempos burst forth with fierce intensity, and dynamic contrasts were heightened with fortissimo chords were emblazoned, combining to give the outer movements a maniacal abandon. Conversely, in the Adagio Wang seemed lost in a dream-world. Her meditative approach was certainly appropriate, but when combined with many hesitations and broadly sustained lines, it soon became wearing.

Following a thunderous crescendo, she drove the closing moments of the Sonata with such incredible speed and agility, ending with mighty strokes. Although some might have found this reading over the top, Wang had the courage of her convictions, and dazzled with her remarkable technique and deeply moving lyricism. There followed five encores. A simple, neatly woven rendition of Schubert’s ‘Gretchen am Spinnrade’ (D118, arranged Liszt) was followed by a famous ‘Melody’ from Gluck’s Orfeo (Sgambati’s transcription); for a diverting contrast she chose Vladimir Horowitz’s fascinating Carmen Variations (Bizet), followed by Arcadi Volodos’s riotous take of Mozart’s ‘Rondo alla Turca’. With Chopin’s Waltz in C-sharp minor, Opus 64/2, she called it a night!