Chopin
24 Preludes, Op.28
Brahms
Variations and Fugue on a Theme by Handel, Op.24 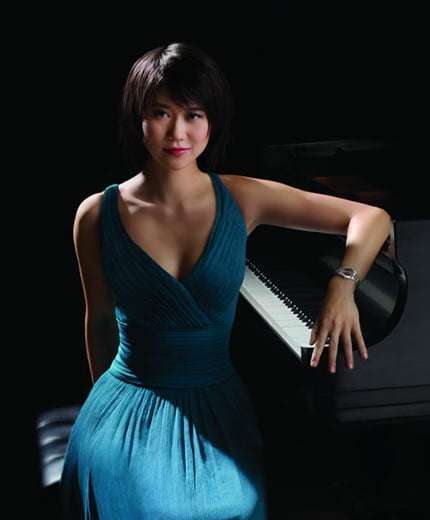 Yuja Wang dropped a sizeable chunk of Schubert from her advertised programme (the first two of the Drei Klavierstücke, D946), she reversed the order of what remained to end with the Brahms, wore two gowns during the evening, both of them showing off her toned, size-zero figure to best advantage, did something green to her hair and played four substantial encores.

The Wang phenomenon, though, soon came into focus in Chopin’s Opus 28 Preludes. Most importantly, she played them as a stream-of-consciousness series of interdependent vignettes, establishing from the outset a high level of fantasy and introspection with the surprising way she launched the opening number, usually a blast of C-major confidence, but here hesitant and questioning, with some probing pointing of the melody buried in the accompaniment. Sometimes I lost touch with some maudlin, unbalanced rubato – the ‘Raindrop’ a bit of a casualty – but then she justified such flexibility with beautifully turned, almost vocal phrasing and some ultra-refined pianissimo – the range of tone and colour she added to the soft-pedal register was astonishing. Perhaps she overplayed the contrast between extremes of withdrawal – XIII threatened to vanish, and the sound she produced for the ‘Raindrop’ was more suited to a damp veil of mist – and the torrents of energy that made VIII’s and XXII’s molto agitato markings particularly tempestuous, but the set as a whole had coherence and poetry, however wilful and hallucinatory. Her playing, it hardly needs mentioning, is very clean, so the accident at the end of the ultimate Prelude in those hard-hitting bass Ds right at the end gave us a clue to the intensity she was aiming for.

For all the extremes of expression, Wang’s style is, paradoxically, admirably self-contained, which suited the poise of Handel’s Theme that launches Brahms’s Variations on it. The technical challenges and rhythmic games were like catnip to Wang and presented her varieties of touch and attack in all their glory. The way she managed Brahms’s high-volume broadsides worked well, either through a rather old-fashioned spreading of chords, as in Variation IX, or, in the mighty Fugue, taking the dynamic down to the cusp of audibility to make the concluding peroration take Hammerklavier-style, heroically strenuous wing – a full body-workout for any pianist. There was flamboyant wit to the Variations that can’t pull away from repeated home-key pedal notes, to be set against the shadowy chromaticism of Variation XX, another Beethovenian gesture that Wang has taken to heart, as she has also, with great flair, Brahms’s romantic filtering of Baroque and Classical models.

Wang’s encores reminded of her stellar wizardry – Scriabin’s two-movement Sonata No.4; Liszt’s transcription of Schubert’s Gretchen am Spinnrade that suddenly hit the emotional bull’s eye; a barnstorming account of Prokofiev’s Toccata; and last, but not least, a shamelessly romantic outing for Zoltán Kocsis’s realisation of Rachmaninov’s Vocalise.