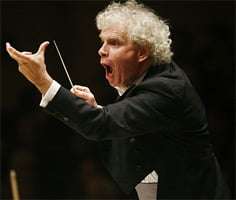 The news that Sir Simon Rattle will be staying with the Berlin Philharmonic until at least 2020 may have come as a surprise given the oft-reported disaffection between conductor and members within the orchestra, and (more to the point) a string of often indifferent recordings in the past few years.

The partnership was heard at its relative best and worst during its visit to the Barbican Hall last year: this Prom was far less one of extremes, though the interpretations often gave one pause as to where Rattle and the BPO – soon to embark on their seventh season – might indeed be headed.

Although he has conducted Brahms since the outset of his professional career (he gave a complete cycle in Birmingham some two decades ago), and won praise for his recent EMI recording of “Ein deutsches Requiem”, Rattle has not necessarily been thought of as a Brahms interpreter, so to tackle what is generally considered the most elusive of the symphonies at such a high-profile event was to raise the stakes accordingly.

The opening, its grandeur exuding latent energy, set the tone for much of what followed: the first movement was well shaped with the main formal cruxes – notably a thrilling transition into the reprise, powerfully defined. At the same time, a tendency to ‘nudge’ phrasing and overly underline detail – the exposition’s codetta a case in point – was equally in evidence; technically immaculate, the coda sounded either nobly resigned or excessively becalmed according to viewpoint. Playing the rest of the work almost attacca has much going for it, the Andante being the highlight of the evening. Mingling ruminative contentment with more speculative emotion, it manifestly reaffirmed this most taciturn of Brahms’s slow movements as among his greatest – the bittersweet regret of the closing bars effortlessly conveyed.

A pity, then, that the intermezzo which follows was so deadpan in expression – its outer sections not so much slow as inert and the ‘trio’ lacking in rhythmic definition: surely the music should have more of a lilt than this! An element of torpor also informed the opening of the finale, and though its main portion lacked little in terms of purposefulness – with the transition into the reprise duly registering as among the most arresting modulations in symphonic literature – the closing pages were less successful; the outcome being not so much inscrutable as featureless. 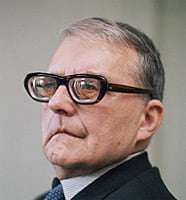 It was an astute decision to pair Brahms’s Third and Shostakovich’s Tenth as, though 70 years apart, these two symphonies find their composer’s mature idioms at their most oblique. Whether the one enshrines a submission to fate or the other represents its overcoming is beside the point.

Rattle is no stranger to the Shostakovich (as is his wont, both works were conducted from memory), though his 1980s Philharmonia Orchestra recording was not among his most persuasive. This is the only one of the composer’s symphonies with which the BPO has had a long association (Herbert von Karajan having championed it when Shostakovich’s reputation in Germany was barely evident) – which might explain the eloquence invested into the lengthy span, as also the sustained momentum of its opening Moderato. That said, the initial paragraph was a little restive and though the second subject has the right capriciousness, the movement’s central apex – the last of those in which Shostakovich conflates development and reprise to climactic effect – was less than overwhelming. In contrast to the warm and unforced string sound in the Brahms, Rattle here favoured a relatively ‘stripped-down’ approach that may account for this. 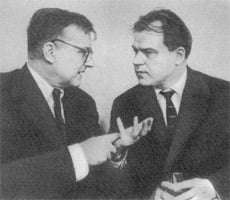 Lithe and incisive, the brief scherzo lacked little in dynamism or energy, and Rattle made of the third movement a slow intermezzo whose equivocal ends (if not the means to this) Brahms might well have appreciated. Expressive emphases in the central section – an intertwining of musical monograms with far-reaching tonal implications – were unerringly placed, though Rattle’s headlong approach to the climax did not make for greater intensity and risked robbing the final minutes of their ambivalence.

More seriously, his over-deliberate take on the finale’s Andante introduction left the main Allegro feeling rather too lightweight to summon the emotional weight necessary if its “dancing on a volcano” demeanour is to register. The transition from the recall of the introduction through to the coda had a rare conviction, but the close eschewed desperation or defiance for an overly matter-of-fact resolution.

Applause was as prolonged as it was instantaneous, though Rattle chose not to reciprocate with an encore, which rather suggests he had no wish to detract from the experience of having heard these symphonies so juxtaposed. Throughout this evening, the orchestral responsiveness was such as to reinforce the Berlin Philharmonic among the finest – in this respect the association with Rattle is clearly working. As interpretations, too, these performances were rarely less than interesting, but it remains to be seen whether this partnership can realise its potential in the symphonic repertoire.