Once again, demonstrating the popularity of Proms Chamber Music, Cadogan Hall was well attended for a varied programme including the world premiere of Huw Watkins’s Sad Steps. 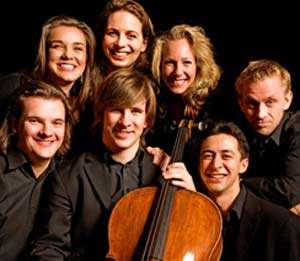 The ‘Prelude’, scored for string sextet, from Richard Strauss’s final opera, “Capriccio”, opened the recital. Written during a dark period in Europe’s history (and premiered in front of one of the leading Nazis, von Schirach, who was offering some protection to Strauss’s Jewish wife and child) this excerpt is nonetheless very pleasing on the senses and full of emotion. Delightfully and expertly played by the Aronowitz Ensemble, this was clear proof that music can transcend tragedy.

For “La bonne chanson”, Magnus Johnston, Nadia Wijzenbeek, Tom Hankey and Guy Johnston were joined by soprano Elizabeth Watts, double bassist Dominic Seldis and pianist Tom Poster. Fauré’s song-cycle, “The Good Song” is an arrangement of nine of Paul Verlaine’s collection of poems of the same (French) name. Written in 1869 and 1870 it is thought that these settings are addressed to his future wife Mathilde Mauté, but the marriage did not last. It is perhaps prophetic that at the time he was composing his “La bonne chanson” Fauré was embroiled in a love-affair with Emma Bardac, and dedicated the cycle to her – that relationship also failed and she later married Debussy. Whatever the outcome, Fauré’s music is exquisite, as was this performance. Elizabeth Watts’s voice is ideally suited, being rich and most melodic.

Huw Watkins was interviewed prior to the first performance of Sad Steps. He recounted its origin, the title “stolen”, as he put it, from a poem by Philip Larkin, “The Whitsun Weddings”. He acknowledged the music was sad, albeit interspersed with dance-like sequences (the steps in the title) and told us that the piece was written for the Aronowitz Ensemble as “I always like to write for players I know”; they did not let him down. Nostalgic and despairing it may be in parts, Sad Steps was played with such verve and commitment that the overall impression was uplifting rather than melancholic.

For an encore the musicians played their own arrangement of George and lra Gershwin’s “They can’t take that away from me”, a fitting climax to a most enjoyable concert enriched by musicians performing at the top of their game.