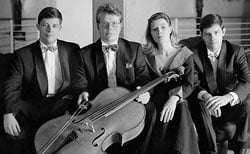 Although established some 15 years ago, the Henschel Quartet’s line-up of three siblings plus a cellist who is now “one of the family” suggests that they have been playing music together for considerably longer. Certainly a sense of musicians wholly at ease with each other was palpable in this lunchtime recital.

The pieces posthumously assembled as Mendelssohn’s Opus 81 do not get too much of a look-in at live events, which is a pity as all four (the first two being all the composer completed of a successor to his F minor quartet) are wholly characteristic and offer tailor-made encores. Or, indeed, music with which to open a concert – as did the Capriccio (1843) here. Its sombre slow introduction and incisive fugal allegro both attest to the influence of Bach as never having left the younger composer, and the Henschel Quartet duly responded with playing that did full justice to its relative severity of manner.

Surprising, too, that Sibelius’s D minor quartet (1909) – the only sizeable chamber work of his maturity – has not been more widely taken up by. Its deep underlying seriousness might be the problem – less stark than the ensuing Fourth Symphony, but whose closely-reasoned expression yields its deeper meaning but slowly. Not least the first movement – a brooding Andante, leading to a halting Allegro (its Molto moderato marking used extensively thereafter) that constantly undermines any more purposeful momentum. If the Henschel seemed unsure how best to pace it, they had no such qualms with the Vivace that follows directly – its coursing energy made more so by its dynamic restraint.

The Adagio is the work’s emotional heart as well as one of Sibelius’s finest slow movements, and the Henschel’s broadness of tempo was justified by the expressive intensity with which the musicians shaped its central apex – as well as that ‘otherness’ evident at the opening and close (the ‘intimate voices’ of the subtitle). Nor did the players misjudge the Allegretto, a weighty intermezzo that ranges widely from its heavily accented opening idea, or the Allegro that wraps up the work with Beethovenian decisiveness.

Janáček’s First Quartet (1923), ‘The Kreutzer Sonata’, is relatively familiar fare nowadays, but its sheer power can still take the unwary listener by surprise. Many present-day accounts stress the music’s increasingly desperate intensity, but the Henschel’s considered approach never risked underselling the music. The opening movement was thus alive with simmering agitation, and if the second seemed just a little too suave in its angularity, the third brought out the soulfulness that is a hallmark of its composer’s last decade. Above all, the finale built to a climax of reckless exhilaration, amply conveying the tragedy in this singular ‘translation’ of the Tolstoy novella that inspired it.

A fine performance overall, then, and a recital to make one look forward to the Henschel Quartet’s next evening-length appearance in London.