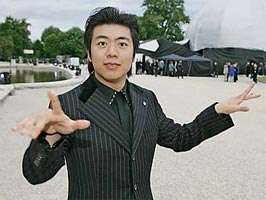 Chinese pianist Lang Lang at age 26 remains something of a musical prodigy. Hearing at age two Liszt’s Hungarian Rhapsody No.2 on the soundtrack of the Tom & Jerry cartoon “The Cat Concerto”, he instantly developed an interest in Western music, began piano lessons at age three and was playing his first public recital two years later. By the time he was nine he was about to enter the Beijing Conservatory but didn’t make the grade and almost gave up until his music teacher told him to listen to a Mozart piano sonata, it was the one in C, K330. This inspired him to carry on and he eventually entered the Conservatory and the rest is musical history.

At the opening of this Proms recital he played another Mozart sonata, K333, and you can understand why he could never have forsaken music. Lang Lang played the music without breaking sweat and went straight into it as the lights dimmed, with no pause for contemplation or setting the mood. The opening movement is full of lyrical and rippling notes that cascade across the keyboard and Lang Lang performed with an easy, laid-back style. If the first movement is in textbook sonata form, the second movement is less rigidly an exercise in classical conformity, but more dramatic and redolent in style of Mozart as a composer of opera. And the finale, with its cadenza, resembles more a concerto than a sonata. The piece, one of Mozart’s most attractive sonatas, was given a truly honest interpretation, not too flashy (that was to come later). 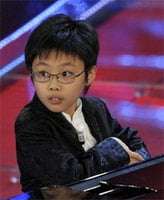 The centrepiece of the recital was Lang Lang’s duet with another prodigy, Marc Yu. He is only nine years old. Marc Yu has idolised Lang Lang who now Marc’s mentor. He is not only a piano virtuoso, but he is also a gifted cellist. They played Schubert’s F minor Fantasia. It is said that many hands make light work and these four hands at one piano certainly made good and light work of the Schubert. Both perched on stools pushed together, there was, however, some crossing of hands over the keyboard. For his age Marc Yu has a very assertive technique and he made his presence felt in this dialogue. Packed with brilliant musical ideas, enough to tempt at least two orchestrations, the two pianists here produced enough sound to fill the Royal Albert Hall. The recital took place in the centre of the Arena, so that everybody had the chance of hearing every note without distortion.

In the rest of the programme Lang Lang produced more-exciting pianism in two of Rachmaninov’s Preludes from Opus 23. The B flat demonstrated how a pianist has to be brilliantly good to keep up with the composer’s own dexterity at the keyboard, while the G minor has a lilting quality of an habañera. This and Chopin’s Grande Polonaise brillante (preceded by the Andante spianato) were full of fireworks, all of which Lang Lang took in his stride. The two Debussy Préludes provided some calm before the storm and the first of the traditional Chinese melodies, Moonlight Reflections, could easily have also been by Debussy. The second was more robust with a tango feel to it.

Finally, the signature pièce de resistance, Liszt’s Hungarian Rhapsody No.2, which started it all off for Lang Lang, was given a hell-for-leather performance, with all the stops pulled out, bringing forth visions of the mad Tom cat playing while the nifty Jerry mouse runs up and down the keyboard. Lang Lang obviously never tires of playing it!

After rapturous applause and a standing ovation, and following an encore, Chopin’s E major Étude, the third of the Opus 10 set, Lang Lang brought on his father who plays the two-stringed Chinese violin and they performed an indigenous duet, Two horses racing, thereby rounding off a ‘celebrity recital’ by a ‘star’ player. With his glittery signature logo on his all-black outfit, maybe Lang Lang should change his name to Bling Bling!