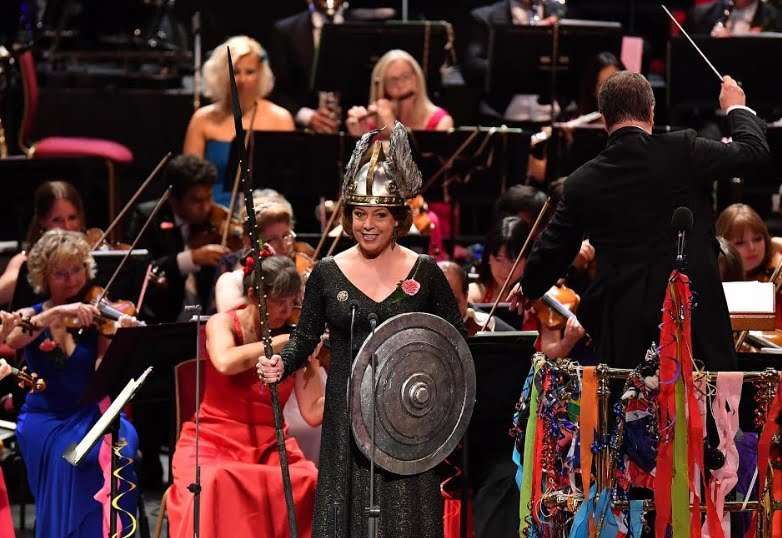 After fifty-eight days and some ninety concerts, we’re back to another Last Night. How did that happen? There was still some unfinished business, tidied up – in the nick of time – in the first half which had three Proms premieres amidst its five pieces. And how times change. In Proms days of yore, Monday nights used to be Wagner nights, but in this season Wagner was squeezed in at the last minute, even if Isabelle Faust had pre-empted his official inclusion with a Wagner encore in Prom 67. For this Last Night Nina Stemme, radiant in both garb and voice, ended the first half as Isolde in the “biggest cut in opera” – the Prelude and Liebestod.

As has become traditional over the last few seasons the opener is a commission. Here, with appropriate flair, Lotta Wennäkoski’s Flounce offered an appropriately quixotic take on the various meanings of that word; confident both in expression and judging the sense of occasion with a light touch and glint in the eye. In an ever-changeable scheme, the laurel wreath was placed over the bust of Sir Henry at this point – although surely the most appropriate time to do it is when the conductor asks the audience to cheer the co-founder of the Proms. 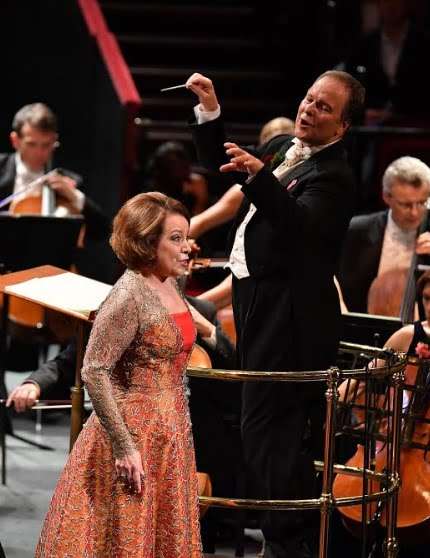 Most substantial was the nod to the fiftieth-anniversary of Zoltán Kodály, who – remarkably – had been unheard this season so far. His Budavári Te Deum marked both the most substantial work of the evening and the most satisfying role for the BBC Symphony Chorus and the BBC Singers, as well as a finely matched quartet of vocal soloists, led radiantly by Lucy Crowe. While bemoaning the omission earlier in the season of, say, Háry János or Summer Evening, this proved much more than a makeweight, originally composed for the 250th-anniversary of Buda’s liberation from Turkish rule.

Kodály’s fellow fiftieth-death-anniversary musician, Sir Malcolm Sargent had his An Impression on a Windy Day played. A blustery tone-poem, though not without calmer sections, it may not have achieved hurricane proportions but certainly made enough of an impression to wonder why we hadn’t heard it more often.

The following music, under a solely orchestral guise, has been an irregular item at the Proms over the years, but – in honour of the centenary of Finnish Independence from Russia – here Finlandia was given in its 1940 version for chorus and orchestra. The combined BBC Chorus and Singers sang from memory Veikko Antero Koskenniermi’s ardent nationalist lyric. The big screens above the canopy focussed on Sakari Oramo mouthing (if not singing) the words as he conducted what turned out to be one of the most moving parts of the evening. 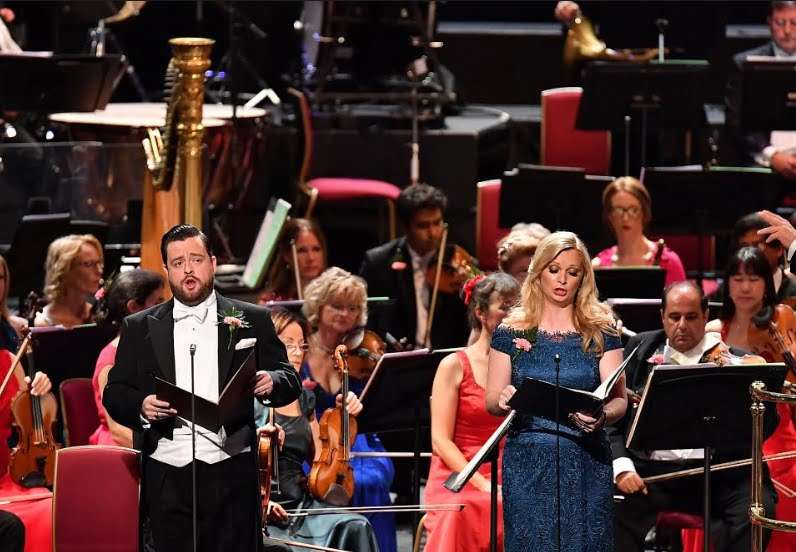 Oramo closed the first half by brining on Nina Stemme for Wagner. While he conjured the BBCSO in a luminous rendition of the Prelude, she stood stock still and remained so during the aching ‘Liebestod’, allowing Isolde’s thoughts to be carried only by the words and facial expressions. It capped a seriousness to the first half that reflected well the majority of the season and paid due reverence to important anniversaries.

There was one more anniversary to celebrate, John Adams’s seventieth. In advance of his Girls of the Golden West (due in November in San Francisco) the second half opened with Lola Montez Does the Spider Dance, an off-cut dedicated to Marin Alsop. Based on a risqué dance by Irish-born Marie Dolores Eliza Rosanna Gilbert, who entertained various Gold Rush clientele (both in California and Australia), it is a catchy little number in various sections, spotlighting cheeky E-flat clarinet and sombre trombone passages, which whets the appetite for the opera. Whether programme annotator Graeme Kay’s allusions to Richard Strauss’s Till Eulenspiegel and ‘Dance of the Seven Veils’ hold any water, I don’t know, but its evocation of Gilbert’s dance in which she pretended to swipe spiders off her dress, ending in her raising her skirt to reveal what was underneath, is another enjoyable Adams short.

With a change of costume to an almost slinky, shiny number Stemme returned, this time judiciously amplified, for songs by Kurt Weill and the Gershwins. We got a rather sedate ‘The Lorelei’ (from 1933’s Pardon My English) first leading to a sultrily sensuous ‘Surabaya Johnny’ from Happy End in Weill’s original arrangement, saxophone and brass-heavy. Stemme’s steady demeanour concentrated both the songs’ passion and hatred into vocal delivery and facial expression to winning effect. To end was a fantastic rendition of Ira Gershwin’s lyrics and Kurt Weill’s music, in ‘The Saga of Jenny’ from Lady in the Dark, Stemme alive to the cleverness of the lyrics as Oramo was to the outrageousness of the arrangement. 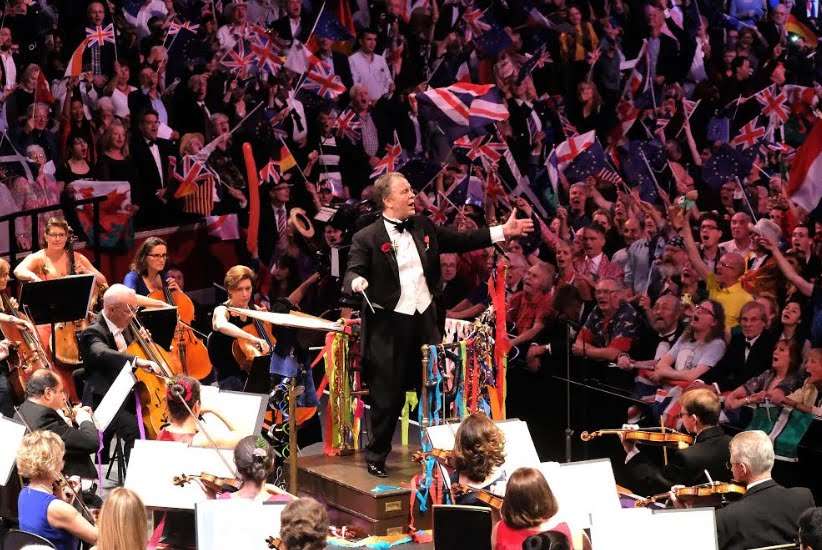 And that – bar the traditional aspects – was it. Well, there was a bit more to it than that. Oramo split his speech into two, saying hello to the Proms in the Park audiences and explaining the regional songs interpolated into Wood’s Fantasia on British Sea Songs. Two were very welcome additions – the Scottish ‘Eriskay Love Lilt’ and Welsh ‘Ar lan y môr’, beautifully sung by Chorus and Singers – but I do wonder if there is a Northern Irish song other than ‘Danny Boy’ to represent over the water. Even ‘Jack’s the Lad’ was a little more under control this year (you could hear the music almost through to the end), even if some tired japes with a floating parrot, introduced a smattering of ill-judged laughter at the start of ‘Tom Bowling’, thankfully not putting cellist Susan Monks off her stride.

As Wood’s Fantasia ran seamlessly into Sargent’s arrangement of Arne’s ‘Rule Britannia!’, Stemme – Sutton Hoo helmet with Mercury-like wings on her head and spear in hand – had almost to run on to the stage, and there was a marked preponderance in the Arena of EU flags. The audience’s vocal contributions continued in both the Elgar and in Parry’s Jerusalem.

All-in-all this was an excellent Last Night. Sakari Oramo made a rather self-deprecating speech about the role of the conductor (not a bus conductor), noting this year the seven women who had conducted at the Proms, before remarking that we should really be applauding the musicians who do all the hard work.

Friday 13 July 2018 opens the 124th season of the Henry Wood Promenade Concerts. See you there.