Bax
The Garden of Fand
Finzi
Intimations of Immortality
Elgar
Violin Concerto in B minor, Op.61 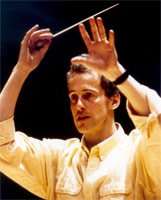 Given plenty of notice that Vernon Handley would not be able to conduct this Prom due to ill-health, Paul Daniel was able to undertake Handley’s inimitable programme unchanged.

The Garden of Fand concerns the sea, the piece opening with a small ship being tossed onto Fand’s magical island. The opening seascape has a tendency to meander and can easily loose focus, as it did here; however it was quick to settle at the onset of “unhuman revelry”. The BBC Concert Orchestra, responsive throughout, Daniel (as Handley would have done) utilising antiphonal violins, produced a well-balanced and thoughtful rendition of what Bax described as the last of his Irish works.

Gerald Finzi’s “Intimations of Immortality” sets William Wordsworth’s ode of the same name for tenor, chorus and orchestra linking nine of the poem’s eleven stanzas with brief orchestral interludes. Through-composed, it is music affected by the composer’s youthful tragedies (the loss of his father when he was seven and the deaths of his three elder brothers in World War One) and, like much of his music, was written over a number of years.

Daniel showed a definite understanding of Finzi’s settings in an interpretation well thought-out in its broad terms as well as in the detail. Sadly though the chorus and orchestra, even in the quieter passages, often drowned Andrew Kennedy’s light tenor voice. Carefully groomed percussion and brass integrated well in the joyous song of the third stanza, Waltonesque lightness and humour belying the intense seriousness of Wordsworth’s poetry. The BBC Symphony Chorus made every word audible, most noticeable in the a cappella passages. 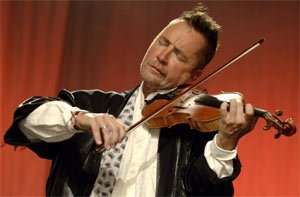 Nigel Kennedy here returned to the Proms after an absence of 21 years. He is particularly associated with Elgar’s Violin Concerto (which he played in London just a few months ago) having recorded it with Handley and more recently with Simon Rattle.

At 51, and married to Polish arts student Agnieszka, Kennedy divides his time between Krakow and London and his music between classical and jazz. Early run-ins with the classical music establishment, including a previous Proms director John Drummond, might explain, in part, his two-decade absence. Kennedy claims he has mellowed (at least off the concert platform) but no one can doubt his enthusiasm and energy.

Nevertheless Kennedy’s belligerent style tested Daniel in the work’s opening leaving him with nothing to do but follow. As time passed Kennedy worked together with the conductor to produce something quite special. Of the three movements the first was the weakest; it lacked cohesion and was spoiled by applause. The Andante was a focused and arresting and into the feisty whirlwind that is the finale.

Kennedy offered the ‘Preludio’ from Bach’s E major Partita as an encore – denied to BBC Radio 3 listeners I gather – thanked the orchestra, praised Paul Daniel, threw his bouquet of flowers into the Arena and left; he only had an hour to prepare for his second gig of the evening. Despite Kennedy’s floor-thumping and fist-bumping hip-hop mannerisms the guy can still make that fiddle sing!