“The tarantella, the entrancing dance form found in several Mediterranean countries, is the unifying thread here. L’Arpeggiata’s programme recalls the popular myth that the bite of the tarantula could only be cured by music and dancing, a remedy known since the Middle Ages as ‘tarantismo’. The associated songs and improvisations – tailored to match the varied symptoms of torpor, excitability and restlessness afflicting victims of the spider’s poison – are revived in a virtuosic performance that transcends generic boundaries.” [BBC Proms website] 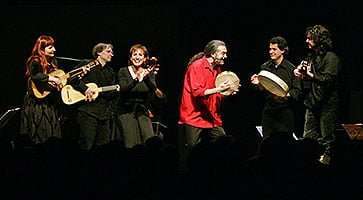 Little Miss Muffet and other arachnophobes would have steered clear of Cadogan Hall for this Proms Chamber Music recital, for the ensemble L’Arpeggiata was celebrating the tarantella – the music said to cure the venom of the tarantula bite.

The power of music to heal and the history of combating the tarantula’s bite with music goes back centuries. Nicola Stigliola’s Eneide, tradotta in lingua napoletana of 1699 describes how Orpheus “dressed in a long priestly stole, raises his voice, and on the seven strings of his lyre plays now a ciaconna, now a tarantella”. In 1610, Matteo Zaccolini had written a manuscript for the Medici, never published because of its “explosive nature”, dealing with the dance of those afflicted in relation to colour and sound. In 1641 Athanasius Kircher, a German Jesuit who spent most of his life in Rome, published a treatise on illness and its cures, with a chapter on tarantismo; it seems that people react to the spider’s poison in different ways, so treatments – such as music or colour therapy – would vary from person to person. Kircher was well known to contemporary composers active at the Palazzo Barberini, including Kapsberger and Allegri. The musical examples in his treatise are the first notated tarantellas in history, founded on an ostinato bass. Unlike the 19th-century composers taken on tarantellas (think of Rossini’s La Danza), almost exclusively composed in tripping 6/8 time, these Neapolitan tarantellas vary in both mood and time signatures.

A rich and varied programme was presented by the seven instrumentalists of L’Arpeggiata, plus some vocal numbers, with some items being danced for the Cadogan Hall (if not the BBC Radio 3) audience. Sadly, only one of Kircher’s tarantellas, recorded in his treatise Magnes sive de arte magnetica, was performed, a few alterations to the published programme meaning his Antidotum Tarantulae bit the dust. A selection of tarantellas and songs were performed with thrilling, toe-tapping exuberance or gentle sincerity. Some of the material was improvised, with players taking solos as one would hear at a jazz gig, and a delightful sense of fun emerged.

The set opened with a Ciaconna by Maurizio Cazzati and Kircher’s Tarantella napoletana, surrounding two songs. Raquel Andueza, specialising in 17th-century Italian music, sang Barbara Strozzi’s L’Eraclito amoroso, which will be familiar to anyone who has heard Magdalena Kožená’s Lettere amorose disc. Andueza’s soprano doesn’t come across as an operatic voice, but one totally at ease in the idiom of folk music, with a lovely, smoky chest register. Vincenzo Capezzuto possesses a remarkable voice, which lies somewhere in the region of countertenor and sopranist, but without the purity of colour one might associate with such a voice-type. On L’Arpeggiata’s Tarantella album, Christina Pluhar was blessed to have the similarly distinctive voice of Marco Beasley – more earthy or gritty than Capezzuto, but just as individual in style.

An item inserted on the day, and later encored, was Pizzicarella mia (a Pizzica Tarantata which was collected in Salento), sung with dashing élan by Capezzuto, without seeming to pause for breath, and the first item danced by Anna Dego, with wild energy. They were accompanied on the Baroque guitar by Marcello Vitale, whose compositions Tarantella a Maria di Nardo – notable for Dego’s frenetic dancing and hair-whirling performance – and Moresca were also included.

It was strange hearing La Carpinese, a traditional shepherd’s tarantella from Carpino, being sung by someone other than Beasley, so synonymous is he with this song, but Capezzuto was brilliantly inside the lyrics, giving them a dreamlike quality. The improvised Canario gave splendid opportunities to Doron Sherwin (cornett) before switching to a duo for Boris Schmidt (double bass) and David Mayoral (percussion), the latter giving an astonishingly virtuosic solo. Solo opportunities for Carmen Gaggl’s psalterion, very similar to a hammered dulcimer, came in an improvisation, La dia spagnola, before another Strozzi song, Che si può fare?, admirably sung by Andueza, which was followed by a Tarantella italiana in which Sherwin again shone. Andueza and Capezzuto sang the folksong ‘Lu passariellu’, with text and melody revised by Beasley, arranged by Pluhar.

Soler’s Fandango gave all instrumentalists a moment in the sun, starting with Sarah Ridy rhythmically alert on the harp, with Pluhar later strumming furiously on the theorbo. Mayoral indulged in plenty of percussion effects, especially brushed drum, before reverting to the anticipated castanets, which he plays with a tremendous flourish. Another additional item was Lamento della ninfa (‘Amor, dov’è la fè che il traditor’) from Monteverdi’s 1638 Eighth Book of Madrigals. Capezzuto, plangent of tone, was accompanied by a double bass, until a soft cornett and percussion were added. More Monteverdi followed, his marvellous song, Sì dolce è l tormento. Matching the likes of Kožená or Philippe Jaroussky, both of whom I’ve heard sing this at Wigmore Hall last year, was always going to be a challenge; Andeuza was just a little metrical and a bit more rubato and colour would have been welcome. It was the only slight disappointment in a brilliantly executed programme.

The enjoyment continued when Anna Dego, dancing the encore of Pizzicarella mia, dragged an audience member to the stage to join her. After Radio 3 had departed, we were treated to Andueza singing the Consuela Velázquez number Bésame mucho – very much not a tarantella! – full of sultry, jazzy inflections, during which she focused her attentions on some of the male participants of L’Arpeggiata, ending up in Doron Sherwin’s lap. If only all lunch-hours were this entertaining…