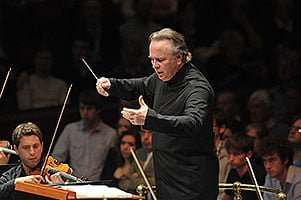 On an initial perusal of the BBC Proms Guide all those Launch weeks ago, this was one of the standout concerts of the 2012 season, certainly in terms of a delicious mix of great repertoire from the last century together with the stimulation of something new. As to the resulting performances, the 121 members (when required) of the Aldeburgh World Orchestra (35 countries involved) did themselves proud; yes, there were some splays and a few insecurities, but all rather incidental when set against the players’ expert training and collegiate commitment – very accomplished (professional) accounts resulted that are a fine testimony to the Britten-Pears Young Artist Programme. All the AWO members are under thirty years of age.

It helps having a maestro with a fully rounded view of the music being played. In the known works Mark Elder had a way of making sure that everything safely arrived. But these were not necessarily safe performances, although Britten’s Sinfonia da Requiem (a suitably Aldeburgh-esque way of starting the evening) lacked the last degree of intensity and danger in the central ‘Dies Irae’. However, the work had opened arrestingly in the timpani and bass drum department (the piano was inaudible though, as elsewhere), this ‘Lacrymosa’ a slow-burn via eerie saxophone crescents to a colossal climax, and with the final ‘Requiem aeternam’ properly transcendental. 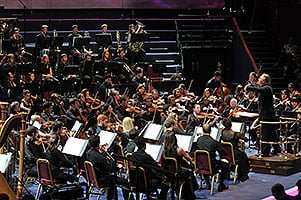 Although Mahler didn’t live to complete his Tenth Symphony, we are the better for the numerous ‘performing versions’ of it (preferably Deryck Cooke’s). Hearing the opening Adagio (which Mahler more or less finished) on its own these days is quite rare – and which may or may not reflect Elder’s view of the ‘completed’ work – but it complemented perfectly the Britten. Elder’s way with it though was initially disconcerting; quite brusque, even impatient, rarely adagio, certainly andante and even allegretto, although there was some smoothing portamento. 20 minutes overall is swift! Yet even without knowledge of what is to come – that searing 10-note dissonant peak – it was clear that the music was on a collision course with something; and then, on the other side of the fracture, there was some consolation. Elder’s success was treating the music as a first movement with more to follow it, which is exactly what Mahler was writing, while holding on to dear life. The viola-players, who begin the symphony ‘solo’, were exceptional; and a mention that antiphonal violins are de rigueur for Elder (and Mahler) with, on this occasion, the double basses similarly arranged ‘stereophonically’, five either side of the platform. 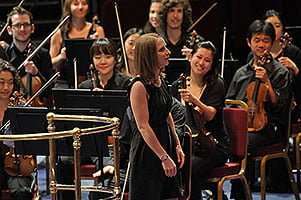 Two years after Mahler died, Stravinsky unveiled his ballet score The Rite of Spring. No doubt the Proms office is planning something riotous for next year’s centenary of the Paris premiere. Meanwhile, for 2012, we got a very considered rendition, opening with a richly moulded bassoon solo from Tamsin Thorn, eyed-in by Elder. It’s easy for conductors to press hard on the accelerator and make The Rite sound glib and reduce it to a showpiece. It is neither. Elder avoided all such pitfalls, finding weight and clarity without compromising momentum. If some moments could have been harder hitting, Elder’s long-term awareness ensured that dynamics hit their red areas at just the right moment; and if the performance was suitably vernal it was also barbarically ritualistic as well as eerily quiet in the opening to Part 2. This was a Rite with time on its side – for Russian-folksong expressiveness to come to the fore and with lucidity to the changes of time-signature, not least during the ‘Sacrificial Dance’ – rhythmically deft and fully conveying the giddiness of the victim dancing herself to death. The closing chord was very emphatic, very final.

Before the Stravinsky was Charlotte Bray’s 11-minute At the Speed of Stillness (2012), given a very convincing first performance by a very talented crew and sympathetic conductor. Scored for a large but not extravagant orchestra, Bray’s new piece is rather fantastical, with moments of reverie (if with rhythmic pulsation not far away), and enjoys an engaging rapidity. The music is constantly diverting (and superbly orchestrated), compelling in the build-up to what seems a tragic climax (marked ffff and “blazing”) leaving a fragmented aftermath before re-fuelling and ending (stopping) on a question mark or at least ambiguously. Trumpet and horn solos were splendidly taken. I have not heard any of Charlotte Bray’s music before and I want to hear more.