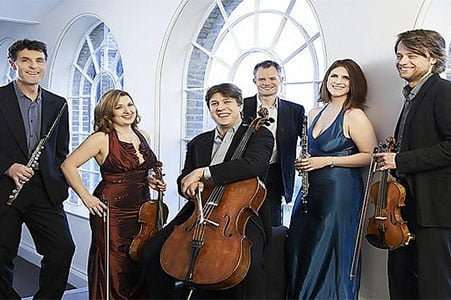 This blend of French and English music was largely well chosen, though the suspicion lingered that many would have preferred to end the concert with The Curlew rather than the written-out encore of Couperin via Thomas Adès, no matter how enjoyable.

The London Conchord Ensemble began with a composer sadly overlooked at the Proms this year (Hindemith being another). It is fifty years since Poulenc’s death (ditto Hindemith), but with no performances at all of his orchestral music in the Royal Albert Hall this was the only chance to mark it. The LCE has played the Sextet (piano, flute, oboe, clarinet, bassoon and horn) for a while now, but started rather too brusquely in the first movement, lacking charm until bassoonist Andrea de Flammineis intervened with a baleful slower theme. Gradually the performance settled, with a second movement that alternated between sweet and slightly sour. The third movement zipped along, its main melody probing capriciously.

Imogen Holst’s Phantasy Quartet, written when its composer was 21, won the Cobbett prize, introduced in 1905 to encourage English composers to write pieces in the ‘fantasy’ form. Holst’s piece won the award in 1928, though its language implies an earlier composition date. It is an attractive work, but also one that overplays its influences of Dvořák, Debussy and Frank Bridge, as well as relying a lot on its opening four-note motif. This tends to be presented in double-stopping that effectively extends the quartet forces to a sextet. The string members of the LCE made the most of the music’s sweet sentiments without over-indulging.The mood changed dramatically for Peter Warlock’s settings of W. B. Yeats, somehow pre-dating the Holst by six years. It is arguably his (real name, Philip Heseltine’s) finest work, and although under-performed it has in recent years begun to receive the exposure deserves. Robin Tritschler’s approach was understated, his personality taking a while to come through, the voice relatively hidden behind the instrumental sextet. The musicians’ contributions were excellent, with just the occasional over-emoting from violinist Daniel Rowland, but this was clearly borne of affection for the piece. Emily Pailthorpe’s cor anglais and her brother Daniel’s flute contributions were haunting evocations of the bird itself, while the mournful viola of Rachel Roberts and the more ominous lower register of Thomas Carroll’s cello provided sobering counterpoint. Gradually Tritschler asserted himself, and this became an effective ploy because we only heard one genuine fortissimo from the tenor, the arresting “And hands hurl in the deep” in the final song. In ‘The withering of the boughs’ a cold chill spread out over the music from the instrumental introduction, but Tritschler’s spoken final couplet, “the boughs have withered because I have told them my dreams”, was the nail in the coffin. The tenor’s performance was unfussy but ultimately engaging, the bleak sentiments of Yeats’s poetry fully expressed by the players. With plenty of time taken between phrases, and an ‘Interlude’ that provided a very effective point of meditation, Warlock’s plight was revealed in all its discomfort, frustration and tragedy, the music dying away to a regretful silence.

To compromise that feeling with Couperin as re-imagined by Thomas Adès was a bold move, though it helped to be again presented with soft and relatively low sounds. Couperin’s recurring motif passed through the unusual ensemble of viola, cello, double bass, clarinet and bass clarinet with a resonance as if sounding in a large pipe. One further thing – it seemed strange that BBC Radio 3 host Petroc Trelawny should interview the pianist Julian Milford about Holst’s string quartet, a piece in which he did not play!