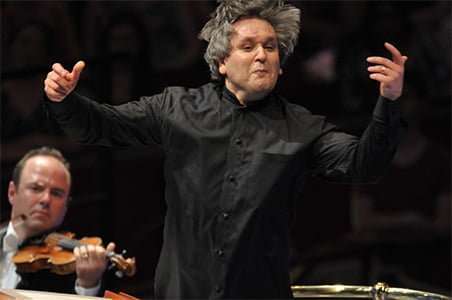 Only a week into BBC Proms 2013 and we have variously been at sea (twice), had a double visit from Doctor Who and enjoyed the authentic sounds and balances of Les Siècles in a Rite good concert; then some Gospel was quickly followed by Thomas Adès’s impressive Totentanz, and beforehand the Bamberg Symphony and Jonathan Nott confirmed their charismatic partnership in Lachenmann and Mahler.

Orchestra Santa Cecilia and Antonio Pappano are similarly magnetic in their relationship and took this ‘meat and two veg’ programme of masterpieces to Michelin-Star status. Of the three courses, the Mozart antipasto was straight-through (no repeats, although most editions do not include one for the first movement) and was thus perfectly proportioned, the opening Allegro ceremonial and elegantly turned, the Andante a beguiling serenade nicely motivated and with grace notes ideally short, the Minuet robust with a liquid-centre Trio, and a finale that was not rushed to reveal a range of characterisations and also produced a fine blaze from trumpets and timpani. 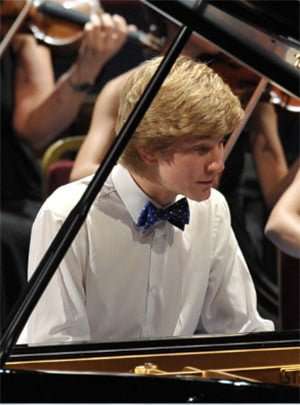 In Robert Schumann’s evergreen Piano Concerto, 18-year-old Jan Lisiecki (born in Canada to Polish parents) charged through his opening solo, a sign of line-breaking impulses to come, and at other times was overly poetic, languishing. The result was a volatility that can suit Schumann in other pieces but less so in this work for which the contrivance of extremes seemed too obvious and with few linking ingredients. The accompaniment was tailor-made for Lisiecki, however, expressive and detailed, the burgeoning cellos at the mid-point of the slow movement being especially wondrous, and although the pianist could be as sensitive as he was deft, if rather colourless, his eagerness tended to undermine poise and his lyricism lacked for spontaneity. For all that, Lisiecki is a huge and individual talent. His encore proved a necessary corrective to what had gone before, a spellbinding distillation of Chopin’s Nocturne in C sharp minor (Opus 27/1), the one that occasionally turns into a mazurka, and in which Lisiecki transported us to somewhere attractively fragrant for a few minutes of black magic, a mysterious dark art in itself.

Few words are needed for the Rachmaninov, which was terrific! Here was a distinctive-sounding, musically-passionate orchestra and its inspiring music director (since 2005) giving a properly symphonic reading of what can be made to seem a histrionic and vulgar work (and already documented by this team on EMI). From a sepulchral opening, expression mined from the depths, through stealth, substance and subtle rubato, the first movement (aerated by violas, antiphonal violins dialoguing meaningfully) was unfolded to a properly shattering climax, towards the end of the development, after which the recapitulation was rather wistful. Pappano saved something for the coda, and any conductor who doesn’t add to the ‘solo’ double basses for the final bar gets my vote! (There have been some timpani, bass drum and tuba horrors at this point.) The scherzo was festive and bright, opening out the music gloriously as required, dynamic and played with gutsy attack, and the clarinet-led Adagio (a seductive solo from Alessandro Carbonare) glowed while always having that ‘sun going down’ quality that the coda so raptly illustrates. The finale was exuberant, reflection and determination hand in hand until vindication brings the house down. One or two balance issues aside (trumpets could be edgy, strings sometimes submerged under brass and percussion), this was a richly engrossing performance from a top orchestra (formed in 1908 as an extension of a venerable institution and attracting Mahler, Richard Strauss and Stravinsky as guest conductors) and its indefatigable maestro who always has a stimulating view about the music he leads.

Even with Stockhausen waiting in the wings to be at his most parliamentarian and worldly, there was time for a postprandial extra (coffee, liqueur and cigar rolled into one), the closing section of the ‘Dance of the Hours’ ballet from Ponchielli’s opera La Gioconda, brought off with infectious dash, enthusiasm and not a little greasepaint.